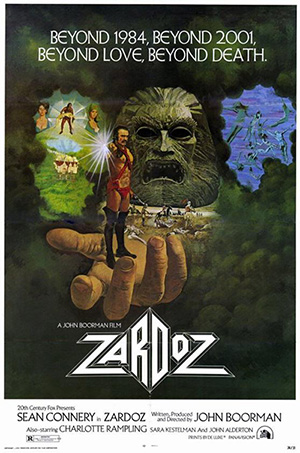 What better way to recover from New Year’s Eve than a leisurely afternoon watching John Boorman’s cult classic Zardoz. Putting aside the seriously disturbing sight of a post-Bond ever so slightly flabby Sean Connery dressed in Vampirella’s swimming costume and thigh length leather boots while sporting a porn moustache it’s difficult to know where to start with this one. The movie belongs in the odd twilight realm between the collapse of hippy psychedelia and the rise of Star Wars (1976), when half a dozen surrealist art-house fantasies popped up from nowhere, some dressed in SF clothes, to present undemanding satires on late sixties and early seventies society. While US film makers were predicting the collapse of civilization with fairly serious grimness (Ultimate Warrior (1975), Soylent Green (1973) and Rollerball (1975)) here in the UK mordant commentaries on social decay consisted of Arthur Lowe turning into a sofa (The Bed-Sitting Room, 1969), Malcolm MacDowell machine gunning his classmates (If…, 1968) and Charlotte Rampling and chums dressing in bright chiffon and prancing around a National Trust stately home endlessly spouting Yes lyrics and other pretentious bollocks at each other – “As Eternals achieved total consciousness, sleep became obsolete and Second Level meditation took its place.” etc etc. 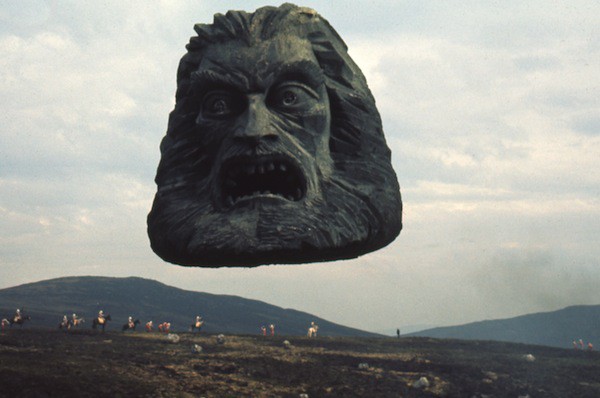 To be absolutely fair the basic premise of Zardoz is pretty cool. In the post-apocalyptic world of 2293 the intellectuals and wealthy have retreated into lotus-eating communities of “Eternals” protected from the outside world by force-fields. In the wasteland the rest of the population, known as “Brutals” live as wretched savages (dressed in suits), subject to violent culls by the Exterminators (wearing scarlet mankinis). The latter are supplied with weapons by a giant floating stone head called Zardoz who tells them that “The gun is good, the penis is evil” (yes you read that right). Sean Connery plays an Exterminator, Zed, who sneaks on board the head and ends up inside the Immortal’s paradise where he is promptly brings all sorts of chaos, because after 300 years of floaty hippy boredom everyone is desperate for a bit of rough, even if it does look like Ron Jeremy’s older brother.

The problem is that plot, logic and continuity is rapidly swamped by layer after layer of the kind of portentous nonsense that ultimately scuppered the Matrix movies. Immortal society includes the “Apathetics”, who stand around looking bored, the “Renegades” (senile old codgers in dinner suits), all watched over by the Tabernacle which works when “Brain emissions refract low-wavelength laser light, passing through the crystal in the brain” – at which point my eyes started to glaze over. In the end the spaced out hippies want nothing more than death and an end to their tedious pristine world, as they’ve all been utterly stupefied by their pointless existence, which Zed and his friends are happy to dole out.

Visually the film oscillates between the sublime and the ridiculous at fairly regular intervals. The opening shot of the vast stone head rumbling through the sky over bleak moors is extremely impressive – until it starts talking about the evil penis and Sean turns up in *that* outfit. Beautiful evocative shots of the lakeside paradise are completely undermined by the sight of John Alderton in an orange nylon wig and red tights. Later on the sum of human knowledge is demonstrated in a very stylish sequence showing paintings and equations projected onto the bodies of the beautiful people (lots of soft porn masquerading as art boobage here) – but it just goes on and on and on. Post Deliverance John Boorman seems to have been given carte-blanche to do what he liked without any editorial interference whatsoever – leading to an incoherently self-indulgent mess which somehow still retains a lot of interesting ideas and arresting imagery, if you can get past the endless pronouncements about Chosen Ones, Tabernacles and Vortexes. 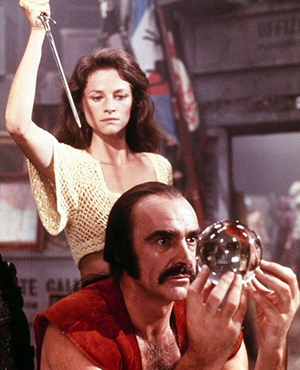 In retrospect it’s very hard to understand what on earth impelled Sean Connery and Charlotte Rampling to sign up for the project, and to carry it through with such straight faces. To be fair Sean Connery gives a reasonable performance, even if he is a bit loose round the edges for a barbarian murderer. Charlotte Rampling does aristocratic ice goddess extremely well, though her role, and the film as a whole, suffers from the 70s belief that women just needed molesting by a real hairy-chested, droopy-moustached man to jettison their intellectual disdain and get on the proper business of breeding more hench men for future girls to coo over.

Zardoz firmly belongs in the Camp Pretentious SF by Someone Who Hasn’t a Clue drawer. It is huge fun, and a window on an earlier, more indulgent age of cinema. Thankfully Boorman survived the movie and went on to make the truly wonderful Excalibur seven years later. 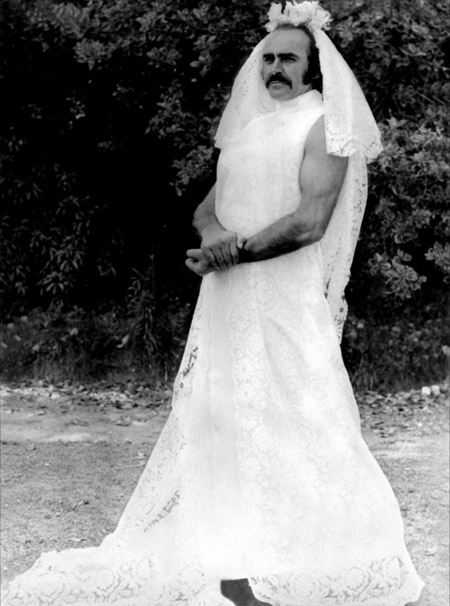