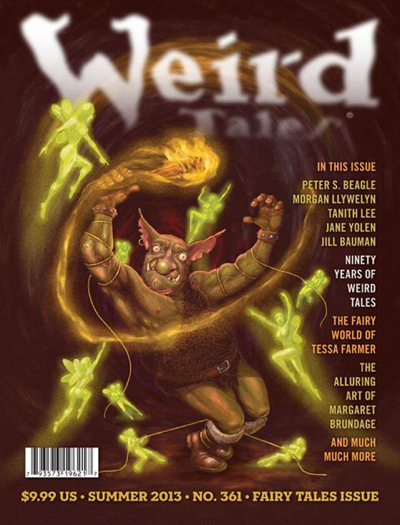 I’ve had a treat this last couple of weeks, working my way through the latest issues of the resurrected magazine Weird Tales. The first issue of the original predated the first science fiction magazine, Amazing Stories, by three years, launching in 1923. It then went on to become the mainstay of that singularly American genre, Weird Fiction, publishing stories by such grand masters as Clark Ashton Smith and H. P. Lovecraft himself. The magazine’s heyday was in the 1930s under the editorship of Farnsworth Wright, responsible for discovering both Robert Bloch and Robert E. Howard, as well as the artists Virgil Finlay, Hannes Bok and Margaret Brundage, whose wonderfully kinky semi S&M vamp covers became a controversial hallmark of the magazine.

Its latest incarnation dates from 2011, and after a slightly shaky rebirth it’s now firmly on track in familiar Weird Fiction territory. The editors have hit on the idea of running themed issues. I have numbers 360 (Lovecraft) and 361 (Fairy Tales). It’s a nice idea because it allows readers to explore different takes on specific subjects by different authors, and it avoids same-issue blandness that can set in when the contents of a magazine are unvaried. The only problem I can see is whether the magazine can think of enough themes to keep the conceit going. Fortunately Weird Fiction now encompasses such a massive range of writing and sub-genres (from Magical Realism through Horror and SF to New Weird) that there is plenty of potential for future publications. 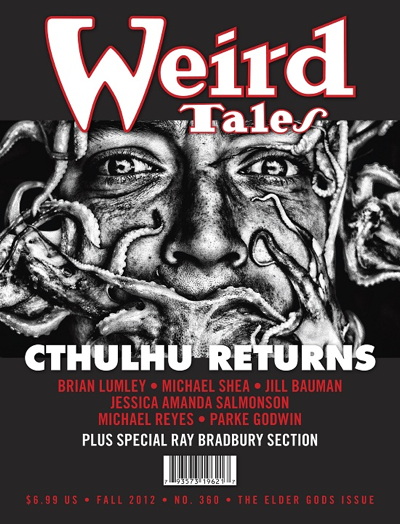 Issue 360 (Fall 2012) is a Lovecraft tribute, with a short section in honour of Ray Bradbury who died while the magazine was being prepared. I must confess to feeling a bit Cthulhu’d out at the moment, despite being a huge fan of Lovecraft. There are only so many ways you can re-craft the  narrative of the unwitting stumbling across the final Awful Revelation and few people have matched the power of the original mythos stories. In this issue, however, the magazine offers both a solid, entertaining yarn by one of the few successful Lovecraftian writers Brian Lumley, and a couple of inventive takes on the standard tropes of an M.R. James style first person dead narrator (‘The Runners Beyond the Wall’ by Darrell Schweitzer) and cultish sacrifices to subterranean horrors, (‘Momma Durtt’, by Michael Shea). It’s an entertaining, if comfortably familiar, read. My only real beef is the illustrations – on Facebook Weird Tales has been posting some fantastic pictures. I miss the same range of weird imagery in the magazine itself. The cover shows a man’s face covered in mini-octopii. To someone who lived in Japan for ten years it looks more like a great night out at Sukiyabashi Jiro than a true reflection of the gibbering horrors within. What is really interesting about Weird Tales 360, though, is the inclusion of an early version of Ray Bradbury’s ‘The Exiles’, in the tribute section added to the end of the magazine. In this H. P. Lovecraft is one of the exiled writers destroyed by the book-burning earth men who turn up on Mars.

The theme of Issue 361 is Fairy Tales and it sports a faintly Hannes-Bokish cover showing an ogre attacked by fairies. With a greater range of material and some strong stories by writers like Peter S. Beagle, Tanith Lee and Jane Yolen, it’s an interesting collection deftly navigating its way through post Angela Carter territory without falling into the trap of either being too twee, or serving up more ‘it’s all about teenage sex really’ cliches. There are some great retellings or re-imaginings of faerie folklore, including a quasi-Dunsany story, ‘The Flowers of Tír na nóg’ by J. R. Restrick, as well as tales from further afield. It would have been nice to have had more non-European tales to accompany the Thai-based story ‘Suri and Sirin’ by Court Merrigan, for example. From my own personal experience I know there’s enough material in Asia to fill several more folk-tale themed issues. I wasn’t so sure about the article about the artist Tessa Farmer who specialises in macabre sculpted tableaux of fairies fighting bugs, stuffed animals or each other, or picking apart rotting corpses of woodland creatures. While I appreciate the idea, the results often look more mangy than epic, especially the elf version of Saving Private Ryan that seems to be being re-enacted around a stuffed fox that’s seen better days. The close up photo of ‘Fairy Forcing Ruby Tailed Wasp to Oviposit on Fox’s Nose, 2007’ I could do without. Nevertheless this issue contained a very enjoyable collection of varied tales. 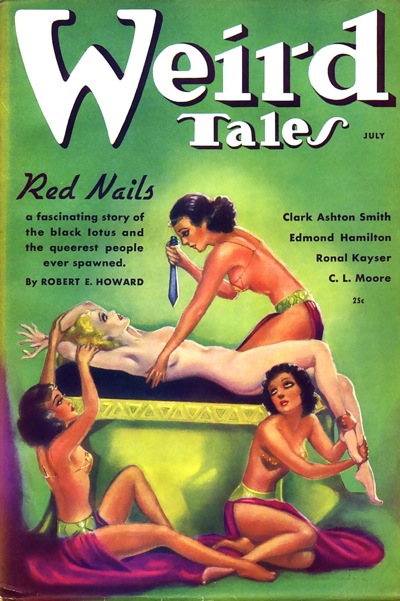 So all in all the new Weird Tales is a great magazine with some solidly entertaining writing and I can highly recommend it to anyone into the weird. I really hope it continues to range across the whole field of Weird Fiction, in all its myriad forms, and avoids the trap of focussing on a specific type of post-Lovecraftian horror. The indications are that this will be the case, which is great news. The layout nicely recreates the two column look of the original pulps, though this makes it a bit of a bugger to read on an iPad. My only real beef is the lack of some really cool imagery to complement the contents and sometimes the artwork lets down the stories, but these are minor quibbles.