The disappearance of Science Fiction Monthly in 1976 left a void in the UK. While New English Library’s SFM never really escaped from its teenage boy bedroom poster origins, and the fiction and artwork it published in later issues rarely rose beyond the mediocre, it was Britain’s only real science fiction magazine post New Worlds.  The biggest problem for magazine producers was distribution, and in the 1970s that meant W.H. Smiths, the chain of national newsagents and booksellers. Basically if your publication wasn’t on sale in Smiths, you had no chance of gaining a wide readership.

When Smiths banned New Worlds following the serialisation of Norman Spinrad’s Bug Jack Barron (1969) (because it was disrespectful to politicians!) that was pretty well that. With the collapse of SFM the general consensus was that the British SF magazine industry was dead. 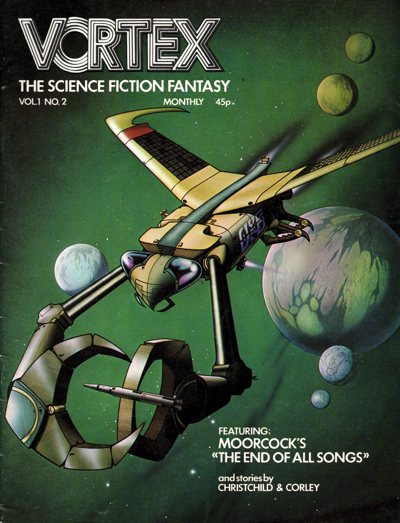 Then suddenly out of nowhere popped Vortex – The Science Fiction Fantasy, a completely bizarre magazine that ran for 5 issues from January to May 1977. Two things immediately stuck out. To begin with, it was in Smiths, so it looked like we had a proper SF magazine again, and secondly it sported fantastic Rodney Matthews covers for the first three issues (and then Eddie Jones for 4 and 5). It was edited by someone called Keith Seddon, who no-one had heard of, and who disappeared just as mysteriously when the magazine folded later in the year.

The Rodney Matthews covers gave the game away. This was very much a Michael Moorcock tribute magazine. Seddon’s real coup was the serialisation of Moorcock’s The End of All Songs (third volume in The Dancers at the End of Time), illustrated by Jim Cawthorn. In the editorial to the first issue, Seddon explained that the aim of Vortex was to carry on the experimental tradition of New Worlds, which Moorcock himself edited from 1964 onwards. The magazine also ran stories by Rob Holdstock, and interviews with Moorcock, Cawthorn and Jones. 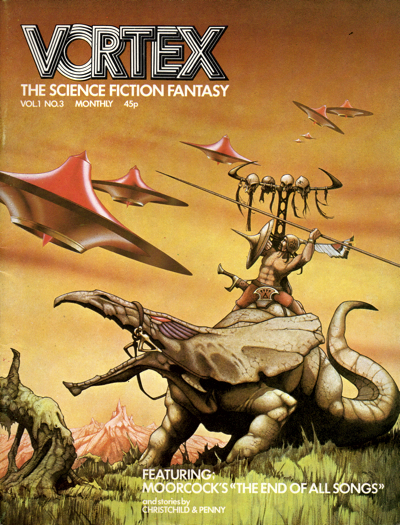 The rest of the fiction in the magazine was best characterised as someone trying ever so hard to imitate Moorcock. One regular contributor, Ravan Christchild, produced a set of cod-Jerry Cornelius tales that were wincingly bad. To give an example, in one of the tales the lead singer of a group called ‘Ziggy Stardust and the Spiders of Mars’ (subtle contemporary reference here) throws big spiders (symbolism) into the audience on an airship over Cologne, and the entire band is promptly machine-gunned for bad taste (irony). It’s New Wave written in the style of an over-caffeinated 13 year old. For a long time it was assumed that Ravan Christchild was the pen-name of Seddon himself (this was the line taken in the second edition of The Encyclopedia of Science Fiction). 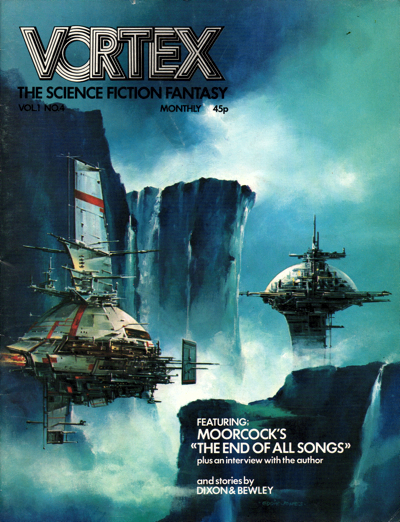 On Moorcock’s Miscellany in 2005 Seddon himself denied this, saying it was another writer who later became a vicar. The only science fiction writing vicar I know of is the legendary Lionel Fanthorpe but I’d be very surprised if the author of March of the Robots (among several hundred other classics) had anything to do with Vortex. Interestingly Seddon says that Moorcock would often find himself reaching for a pencil to make corrections to Christchild’s stories because they were so like his own. 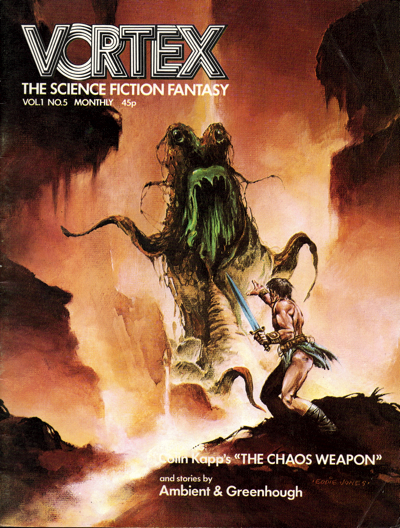 Despite its faults, Vortex was an entertaining, if surreal, experiment. Once The End of All Songs finished, there wasn’t much else to carry the magazine along and its production values made it a very expensive project (glossy paper, full colour etc.). The next SF magazine to appear in the UK was Penthouse Publications’ Omni,  which started off in 1978 as another Science Fiction Magazine by People Who Haven’t a Clue project before Ben Bova became fiction editor. It wasn’t until Interzone appeared in 1982 that the UK had anything approaching a decent, intelligent science fiction magazine.