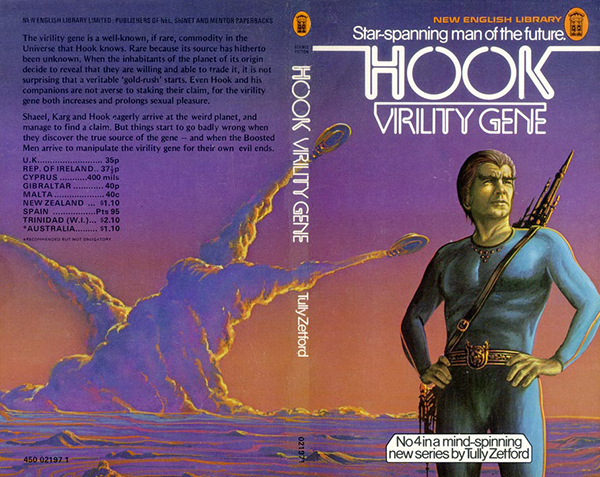 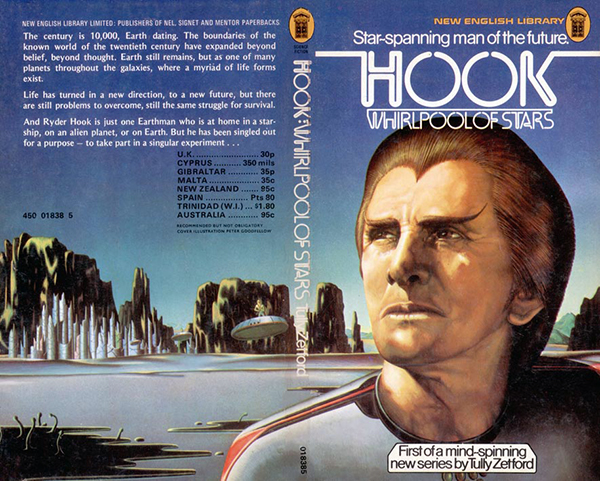 As I’ve mentioned before, 1974 marked my Looking into Chapman’s Homer moment when on opening Science Fiction Monthly number 2 I had the same feelings as ‘stout Cortez when with eagle eyes, He star’d at the Pacific’. From then on I grabbed any and all SF that took my fancy, usually based on whether it had a Bruce Pennington or Chris Foss cover, and dove in. At first I hadn’t a clue about who wrote what or when, it took a while for me to realise, for example, that Skylark of Space was actually written in 1928 or that Tully Zetford wasn’t perhaps of the same stature as Isaac Asimov or A. E. van Vogt. I hoovered it all up indiscriminately, buying paperbacks by the foot.

Among other things New English Library specialised in mass-produced pulp novels for teenagers. None of your sanitised ‘Young Adult’ nonsense here, this was loads of cheesy, voyeuristic sex and a bit of the old ultra-violence for a generation desperately attempting to look hard despite youth fashion forcing them to wander round in flared trousers, jean jackets piped with tartan and outrageous mullets. Alex in A Clockwork Orange was the role model – not least because he managed to be evil and menacing despite wearing nappies, a bowler hat and false eyelashes. 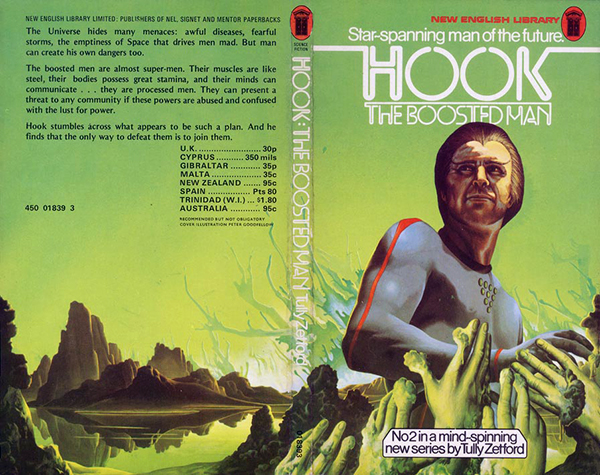 NEL’s lurid hackwork factory inevitably spilled over into their SF catalogue and perhaps the most entertaining manifestation was Tully Zetford’s Hook series which started with Whirlpool of Stars (1974) and The Boosted Man (1974). Big full-page adverts in Science Fiction Monthly pulled me in with promises of mind-spinning sf for 30p and I bought the series. They recount the adventures of loner desperado Ryder Hook as he flees across the galaxy from the other Boosted Men (as well as having super-strong bodies they can speed up and go very fast, like Quicksilver in the X-Men). What I didn’t realise at the time was that Tully Zetford was one of the pen-names of Ken Bulmer who churned out science fiction and fantasy novels at a rate of knots under various pseudonyms, his most famous creation being the fifty-two books in the swords and planets Dray Prescott series. 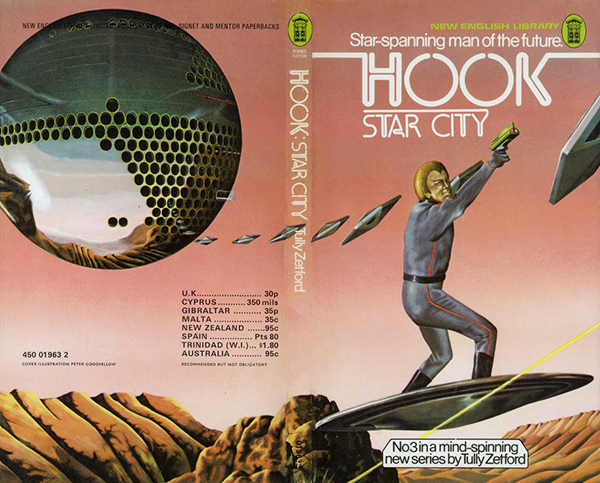 The Hook novels are seriously bad but possess a frenetically demented energy that make them (oh, OK, one of them) readable late at night after a few pints, preferably out loud. Whirlpool of Stars gives the impression of a story written in one hysterical amphetamine-fuelled burst. It starts in the middle of the action and never lets up, which means that Bulmer is constantly having to throw in detail, what passes for characterisation and backstory as he goes along. I might be wrong but given that it reads like a first draft hammered down on butcher’s paper for maximum speed and output the result is a constant chaos of asides, shifting points of view and throwaway references to people, places and things hurled into the mix. The style is an odd mix of Chandleresque wise-cracking (‘This man’s face bore the kind of smile Hook had seen on the leading barracuda as it closed in, grinning, on its hunk of bloody meat’) and an oddly florid juvenile prose (‘he’d put the flier on auto, put her over his knees, and spank that flame-pantied bottom’). Foul intergalactic curses like ‘ninny’, ‘poltroon’ and ‘curd’ abound. And then there’s the guns. Bulmer goes overboard with his description of the various weapons at hand in 10,000 AD, each with its own lovingly described effect. A Tonota Eighty will blow big ragged holes in you, Wharton 90s pepper you with needles, the Abdoslit fires blades which razrez you up all horrorshow and then there’s the Delling. Although this has appeared in several anthologies of bad SF it’s still worth quoting the effect of this weapon in full:

Someone had used a Delling on him…
Giffler melted.
His body deliquesced. It oozed. His head flowed and collapsed and sloughed. Still upright, he melted and shrank and collapsed, his body shimmered like a blood-drenched jelly. He shrank and oozed and formed a contracting pool of scum on the yard stones…
A robot vacuum cleaner and scrubber darted out on rubber wheels and began to suck and clean the spot where Giffler had died.

Sadly by the end of book four, Virility Gene, Ryder Hook had turned out to be a bit of a self-congratulatory nob, even to a gormless and largely uncritical thirteen year old. Ultimately he comes across as a smug louche, an impression not helped by the paperback covers. Even by NEL’s admittedly unambitious standards the artwork is pretty dire. On Whirlpool of Stars he’s less interestingly amoral antihero and more middle-aged lounge lizard suffering from constipation while desperately trying to appear as cool and sexy as Peter Stringfellow, Bob Guccione or the editor of Reader’s Wives. The figure on the pink and puce cover of Star City (Number 3) looks like it was drawn by a ten-year old. The last one has him standing in the kind of blue spandex body stocking that would embarrass even David Bowie’s Goblin King, with what looks like a cathedral strapped to his back and the complexion of someone who’s added chain smoking to his list of health problems.

Although only the first four in the series were published in the UK, Ken Bulmer, like Sally Oldfield, continued to be big in Germany long after his star had waned in Britain. There’d be a further seven books, all in German, coming out between 1987 and 1988. One day it would be fun to see them in English. Despite their faults the books in the Hook series are entertainingly ridiculous and often laugh-out-loud funny. They certainly kept me going on an interminable holiday with my parents in Norway in a cabin by a rainy fjord in 1974.