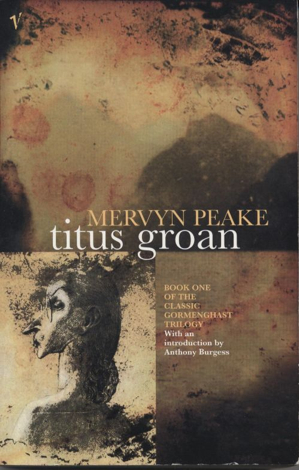 Not surprisingly over the past few years people’s ideas of British post-war fantasy have been been dominated by J. R. R. Tolkein’s The Lord of the Rings, but his nostalgic Pre-Raphaelite vision of an idealised medieval world is not the only non-realistic writing to come tumbling out of the horror of World War II. Alongside the tales of Tolkein and C. S. Lewis there’s another darker and more grotesque strand of fantasy. Mervyn Peake’s Titus Groan (1946) belongs to this second, absurdist tradition. His Gormenghast trilogy, of which Titus Groan is the first book, is best described as Charles Dickens on Acid.

Mervyn Peake served in the Royal Engineers during World War II. He began writing Titus Groan partly as therapy following a nervous breakdown, and it shows. He was first and foremost an artist and this training also comes across in the unbelievably dense prose of the book, as well as the haunting portraits he produced of the characters from the novel. Titus Groan tells of a dynastic family of bizarre eccentrics living in the vast castle of Gormenghast. This world is a surreal combination of ancient masonry and mid-20th century bourgeois domesticity, where peeling wallpaper mingles with crumbling gargoyles and images plucked straight from dreams (a mare and her foal swim in a lake on top of a vast tower, two sisters have tea on the trunk of a tree that grows horizontally from a vast wall).

The inhabitants of Gormenghast, Lord Sepulchrave Earl of Groan, his family and servants, live out their lives bound to innumerable arcane daily rituals and laws. Like early Dickens, Peake is essentially a writer of Grotesque Fantasy. People take on the characteristics of objects (the slab-faced grey scrubbers who wash the floors of the huge castle kitchens) and objects become imbued with a bizarre life, not least the castle itself which seems to be infinite. There’s not a lot of plot in Titus Groan, the eponymous hero is still only one year old at the end of the book, though we see the beginning of the rise of the kitchen boy Steerpike whose assumption of power will dominate the second book in the series, Gormenghast.

Peake’s style is obsessively lush. He’s happy to spend paragraphs describing damp stains on a ceiling or the drip of wax from a candelabra. At one point, during a banquet, he suddenly flips into a stream of consciousness study of each of the main participants. For readers used to the plot-driven excitement of books like George R.R. Martin’s Game of Thrones series, Peake can seem a heavy and occasionally pointless slog. But I think that Titus Groan, despite its length, is a book to be read very slowly and savoured for its remarkably visual evocation of a completely bizarre world. To my mind it’s a far more interesting and disturbing book than The Lord of the Rings.