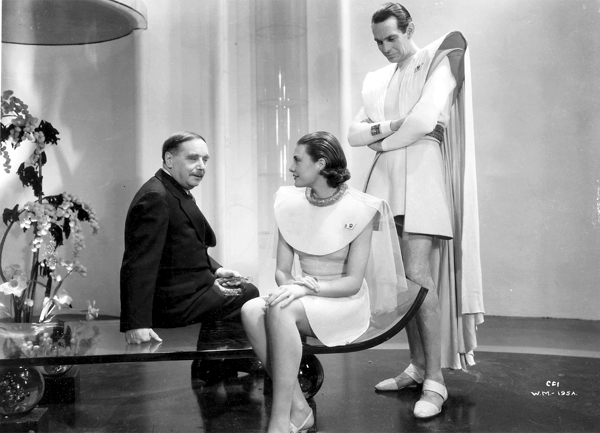 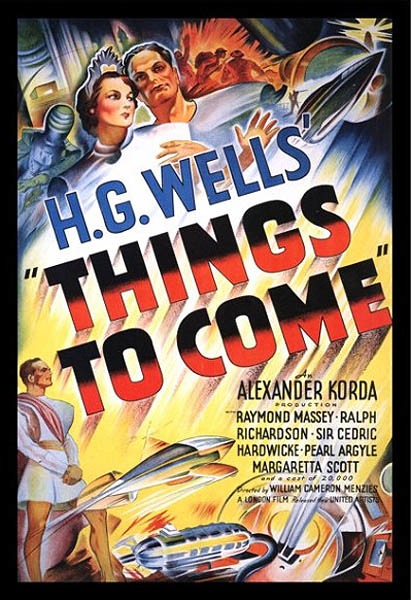 In 1936 Alexander Korda, flush from his success with The Private Life of Henry VIII (1933), collaborated with H. G. Wells to turn the writer’s future history The Shape of Things to Come (1933) into a movie, ending up with what is probably the first attempt to make a serious SF film. What emerged is one of the most fascinatingly bizarre movies in science fiction film history, one which gives a stunning insight into just how prescient, and how completely misguided, Wells’s vision of the future was, especially in the context of what was happening in European politics at the time.

The first thing you notice when watching the film is the poor quality of the images, (few decent prints survived of the movie) and everybody’s accent. The ordinary British people portrayed in Things to Come make the inhabitants of Downton Abbey sound like the Sex Pistols during one of their more incoherent moments. This goes beyond posh to Utterly Alien Noises. Cut-glass stage accents of the 1930s do almost sound like another language, and effect is compounded by the extremely stagey performances of the cast. Raymond Massey and Edward Chapman play three generations of the same characters, Cabal and Passworthy, and their conversation around the Christmas tree circa 1940 goes something like this:

It takes a bit of getting used to, but thankfully the sacchirine vision of 1930s Christmas round the tree ends when the unnamed ‘enemy’ bombs the town flat, ushering a montage showing the World War lasting from 1940 to 1966 by which time civilisation has collapsed and toothless hicks throw boulders at each other until an epidemic called ‘the wandering sickness’ brings the conflict to a halt.

In the second part of the film, set in 1970, local upstart dictator ‘the Chief’, played by Ralph Richardson, finds his power challenged by the arrival of Cabal sporting black leather and flying a futuristic airplane. Cue lots of theatrical marching up and down and declaiming as the pompous tyrant of the ‘Indipindint sivirin steyt et WOOOR’ is faced down by the representative of Wings over the World – the new world order of black leather-clad scientists who finally roll up with a massive fleet of bombers to put the Chief in his place by dropping sleeping gas on everyone (the Chief, however conveniently dies because there is ‘ner pleys for his sert in the New Werld Erder’). By this time the modern viewer starts thinking ‘hang on a sec..’ as the leader of quasi-military Wings over the World, surrounded by men dressed like SS officers complete with brylcreemed hair, sets out his vision of a Scientific World of Tomorrow.

Next comes one of the most visually impressive parts of the film as a montage of special effects and model work fast-forwards us through the scientific advances of the next sixty six years and the building of the new Everytown underground. For some reason early visions of the 21st century had us all flouncing around in neo-classical gowns and flip flops, so thankfully the cod-Luftwaffe uniforms have been replaced by capes and togas. Man stands on the eve of his greatest triumph, as Cabal’s great grandson. (again played by Massey) prepares to fire his daughter and Passworthy’s son at the moon with the Space Gun. Sadly, despite the triumph of science, rebellion still lurks in the form of Cedric Hardwicke’s Theotocopulos (don’t ask) whose thundering performance makes the previous hour look like an essay in Martin Scorcese-directed method acting. His objections to the Space Gun seem to be founded on nothing more than an artists’s suspicion of science and a desire to return to a time when ‘LIFE (raise fist to heavens) WAS (march up and down) HOT (flare nostrils and boggle eyes) AND (flip cloak dramatically over shoulder) MERRY!!!! (exhale and strike a pose). Despite an absence of any content or cogent argument, other than bellowing variations on ‘WE DON’T WANT YOUR PROGRESS!’ he whips up the inhabitants of Everytown into rent-a-mob in about two minutes flat and they all charge off to destroy the Space Gun.

The last exchange between the descendants of Cabal and Passworthy as they watch the progress of their offspring via a giant telescope is worth quoting at length (you’ll have to imagine the accents this time):

PASSWORTHY: “But we are such little creatures. Poor humanity. So fragile–so weak.”

CABAL: “If we are no more than animals–we must snatch at our little scraps of happiness and live and suffer and pass, mattering no more–than all the other animals do–or have done.” (He points out at the stars.) “It is that–or this? All the universe–or nothingness…. Which shall it be, Passworthy?”

Cue heavenly chorus belting out ‘WHICH SHELL IT BEEEEEE?!’ over the credits.

Wells got the future spectacularly wrong, which is not so surprising. What is surprising is how the film manages to get the present completely wrong as well. It shows such a misguided understanding of the state of things in the inter-war period that it becomes hard to understand why Wells was seen as such a profound political thinker at the time. To be fair, English culture during this era wasn’t known for its subtle perceptions of the movements of history. There was England and the Empire, and then a lot of irrelevant stuff like France and Germany in between.  Many English writers and film makers subsequently had their gaze locked firmly inwards and Wells and Korda were no exception. Hence the movie cheerfully echoes images and ideas lifted wholesale from Italian and German fascism (world domination by a ‘scientific’ elite, progress as nothing more than the manifestation of Nietzchean will, kinky black leather uniforms) without being aware that it’s doing so. The villiains of the piece are cartoon straw men conjured from the Home Counties or the pages of Richmal Crompton’s Just William – Richardson’s Colonel Blimp ‘Chief’, Hardwicke’s Oscar Wilde look-a-like pampered Bohemian, both quickly vanquished by Wells’s rhetoric.

It’s easy to see how later writers like Orwell grew impatient with what they saw as Wells’s dangerous naivety. To be fair, Wells was not alone in his blinkered understanding of what was really happening around him. Right up until the mid 1930s fear of communism trumped disquiet about fascism, and British papers like The Daily Mail happily praised Mussolini, Franco and Mosley’s British Union of Fascists while moaning about Jewish immigrants fleeing Nazi persecution. Efficient leaders that sorted out the world’s muddles, kept the wrong-headed in their place and got things done in a scientific way were to be admired. In the first half of the 1930s only a few astute loners like Churchill realised where this thinking would, and did, end up.

Despite its faults Things to Come is a wonderfully fascinating film to watch. It’s stagey and bombastic with zero characterisation. The actors are nothing more than mouthpieces for Wells repetitive speechifying about Progress vs Ignorance and much of it drags, especially at the beginning. But some of the montages and set pieces are brilliantly staged. As a piece of science fiction film history and an example of the wrong-headedness of much 1930s UK political commentary it’s a treat to watch.

Not surprisingly the real world betrayed Wells’s utopian dream. Having being lauded as a profound political thinker and future prophet, he travelled the pre-war globe to talk with world leaders, famously asking Stalin what he intended to do about world peace. Yet within years World War II had taken his Utopian dream of a global empire ruled by efficient scientists and turned it into a grotesque nightmare. The extent of his disillusionment is clear from the title of his last book, The Mind at the End of its Tether (1946).

Things to Come can be watched on YouTube here

And here is H. G. Wells’s script for the film.