They Came from Mars 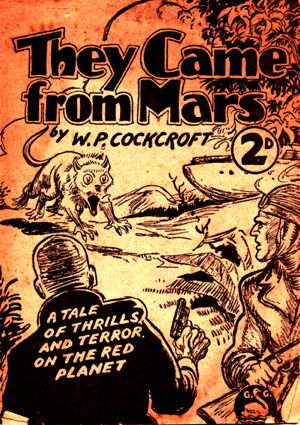 They Came from Mars, by W. P. Cockcroft, was first published in 1934 as the story “Cataclysm” in the British boys magazine Scoops. It was re-issued in 1945 as a little chapbook selling for 2 pennies, a common strategy during wartime because of paper shortages.

As the Encyclopedia of Science Fiction points out, most of the writers for Scoops had meagre experience of writing science fiction. They essentially wrote ripping yarns of adventure with a space age wrapper. W. P. Cockcroft’s short story bears little relationship to the literature pouring out of the Golden Age in the US, under the stewardship of John W. Campbell and his magazine Astounding Science Fiction.

Yet They Came from Mars belongs to a recognisable sub-genre of British sf. The basic premise, of visitors to Mars returning with a deadly plague, echoes themes from John Wyndham, the ground-breaking Quatermass TV series of the 1950s, and several episodes of Dr Who.

Like much of the latter the story is desperately low budget and parochial. A rocket ship returning from Mars is guarded by a lone British Bobby with a flashlight. A local country doctor quaffes a few shots of whisky before staggering out into the night to investigate a potential alien menace. The attitudes to Mars its inhabitants is refreshingly straightforward; funny looking alien running towards us – shoot the bugger, other-world intelligence singing a weird Martian tune – kill it! The story exudes a desperate anxiety to maintain the proper order of things, a little middle-England realm of stupid policemen, comic yokels and boozy doctors. This sense of an Agatha Christie world increasingly menaced by forces from outside (whose crime often seems to be merely the fact that they are different) can easily be traced to the trauma of war, the collapse of the British Empire and the changing world order that completely ruptured UK society from the mid 1930s onwards. Of course, writers like John Wyndham and Nigel Kneale did a far better job of expressing post-Imperial British angst, but W. P. Cockcroft has a fair stab at it.

The original story “Cataclysm” was followed by a sequel; “City of Mars” (1934), in which the survivors of a plague on Earth return to the red planet. Judging by the blurb the attitude to the natives doesn’t appear to have improved:

From a dead world, the last survivors of mankind have come to Mars, and this is the epic story of the colonisation of the Red Planet, of war with the Martians, and of the great peace that came to the world.