The Woman in Black and other malfunctioning boilers. 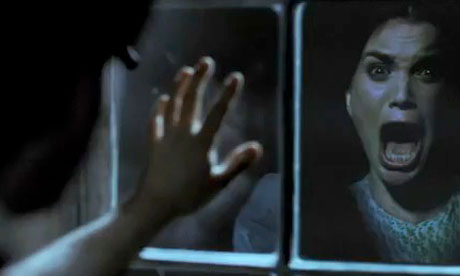 A few days ago I saw The Woman in Black with Daniel Radcliffe. It was huge fun, especially for someone who used to sneak out of bed as a child to watch Hammer Horror films when BBC2 did a run of them late on Friday night in the early ’70s. It is very recognisable as a Hammer movie, even down to the muddy grey/green palette, and the sheer witlessness of the characters. In the early 20th century you would have thought Daniel Radcliffe’s character would have read enough ghost stories to realise what was going on. Certainly M. R. James was publishing his wonderful tales at precisely the time Mr Radcliffe is setting off for Shrieky Phantom on the Wold. For anyone with half a brain, the response to “Whatever ‘e do zurr, don’t be a’going to the terrible haunted house cut off by the tides tonight!” is to run away very fast in the opposite direction, preferably not stopping till you arrive at Sydney Immigration Offices.

I recently read Paranormality by Richard Wiseman. In it he describes an interesting experiment to gauge people’s reactions to ghosts. Psychical researcher Tony Cornell dressed in a white sheet and walked around a dark park and cemetery in Cambridge late at night pretending to be a phantom. The response from people who saw him were a) he’s mad or b) he’s taking part in a student art project. No-one died of fright or ran away screaming ‘There’s a ghost!’. The implication is that the fully awake, rational mind in a ordinary setting simply doesn’t register classical ghosts as anything other than nutters in fancy dress. 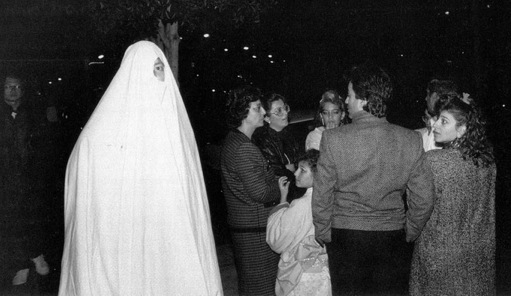 Yep, nutter in a sheet

Wiseman spends a chapter looking at the various possible explanations for the actual ghostly experiences that people have, and more or less comes to the conclusion that these occur when the brain misfires (which it does quite frequently) and starts experiencing dream states when conscious, usually on the border between wakefulness and sleep. Throw in a bit of suggestibility and hysteria, whipped up on Ghost Tours, for example, and the chances of people ‘seeing’ a ghost increases dramatically.

What is interesting is that ghosts, like UFOs, follow historical and cultural changes quite closely. Medieval man didn’t believe in ghosts. When you died you went to one of three places and that was that. Dante had to go to all the way to hell to talk to the tormented dead. No-one came back to recount their woes and rattle chains. Shakespeare, on the other hand, has plenty of ghosts returning to tell people off for their misdeeds. With the break from Rome and the rise in Protestantism, the doctrine of Purgatory was no longer a convenient way station for those not good enough to make it straight to heaven, so the fractious dead start turning up back on earth, at least in literature and art. Jacobean family portraits would often include deceased relatives among the living. They are recognisable for looking a bit paler than the rest.

The huge upsurge in ghosts begins in the mid to late Victorian age and coincides, surprise surprise, with the rise of photography. In the 1860s the photographer William Mumler accidentally took two photographs on one plate. Seeing one ghostly figure superimposed on another made him realise he was on to something, and he promptly set himself up as a fraudulent medium selling pictures of people with their deceased loved ones hovering around them. Spirit photography became massively popular, with people queuing up to have novelty portraits of themselves with Aunty Florence manifesting herself from the other side. Traditional ideas of ghosts (pale, transparent and a bit floaty) largely come from this imaginative use of the new technology. 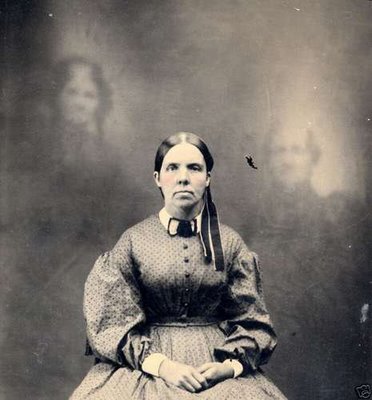 Another reason for the upsurge in ghosts, and the so-called Haunted House phenomenon, is the increase in coal fires, and gas heaters, in homes in the 19th century. Primitive heating systems generate carbon monoxide. Among the symptoms of carbon monoxide poisoning are a feeling of oppression, dread and visual and auditory hallucinations. The effects of CO linger, and are cumulative. Not surprisingly, old Victorian houses with leaky boilers are more susceptible to this phenomenon. New Barratts houses with proper insulation, regularly checked boilers and enclosed central heating rarely pop up as the haunt of scary screaming women in black lace. Here’s a famous case of carbon monoxide induced ghosts from 1921.

The overall conclusion seems to be that scary ghosts and hauntings are the product of our imagination under stress, half asleep or addled by toxic gas. If Freud was right, and our unconscious mind creates stories to express our innermost desires and fears, then what spooks us is scary narratives, not ‘real’ ghosts. The Woman in Black is a case in point. Stick her in WestQuay Shopping Centre on a sunny afternoon and she’d just look like another miserable Goth, and our response would be ‘Cheer up love,’ rather than ‘Aaaaaargh!’. Put her in a narrative of fear, with carefully engineered eek scenes and creepy music, in front of an audience expecting to be scared, and she pretty well does the trick.

This hilarious parody of Paranormal Activity sums it up.