The Thrilling Adventures of Lovelace and Babbage, and Logicomix 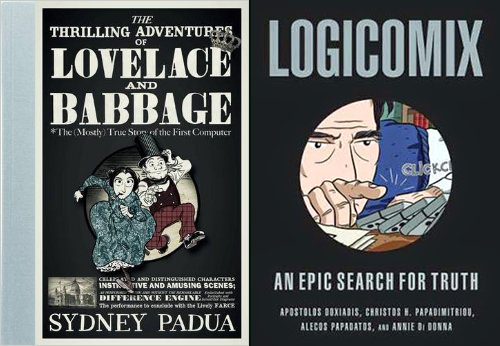 Comics again, this time with a couple of wonderful graphic novels that tackle similar mathematical themes but in very different ways. Logicomix: An Epic Search for Truth by Apostolos Doxiadis and Christos H. Papadimitriou focuses on Bertrand Russell’s attempt to create a mathematical foundation for logical truth, while Sydney Padua’s The Thrilling Adventures of Lovelace and Babbage concocts a series of surreal steampunk adventures around the part-finished Difference Engine and the never-made Analytical Engine. 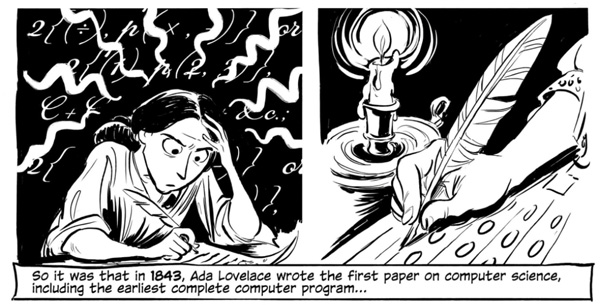 Japanese manga have been used as teaching materials for complex concepts since time immemorial but it’s only relatively recently that western comics have been brave enough to tackle complex science or philosophy without being preachy or tendentiously dull. Logicomix and Lovelace and Babbage jump in the deep end, tackling predicate calculus, set theory, imaginary numbers and quarternions. What’s interesting about both books is that the artists happily insert themselves into the stories. Logicomix hops back and forth between early twentieth century Europe and modern day Greece as the creators of the book chase after Russell through the various theories and arguments that dominated the philosophy of logic. Half of Lovelace and Babbage is taken up with footnotes and endnotes that provide a charmingly quirky commentary on the background to the various adventures of the protagonists. This approach works better in the latter – the modern-day scenes in Logicomix suffer from a tendency to collapse into repetitions of ‘this is so hard how are we going to do it?’ while Padua’s asides are fascinating in their detailed description of both the science behind the Difference Engine (and its imaginary successor – the Analytical Engine) and the strange relationship between Babbage and Lovelace. 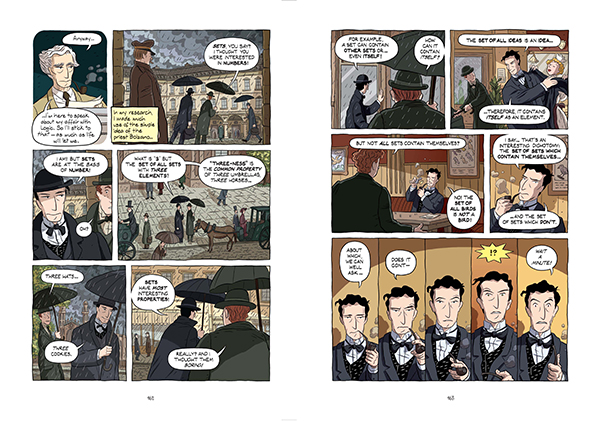 To be fair, Logicomix has the harder task. Traditional mathematics was founded on the idea of axioms – self evident and utterly true concepts such as ‘a straight line is the shortest distance between two points’. Every mathematical statement has to be proved, except these. Russell thought this was illogical and set out to create a way of proving axiomatic truth. This took him on a quest for an absolute language of mathematical logic, encountering other philosophers infected with varying degrees of barminess, from Gottlob Frege through Wittgenstein to Georg Cantor. The story cleverly maps this journey against European society’s descent into chaos via the First World War followed by the rise of Hitler. Insanity is a constant theme underlying Logicomix, as Russell’s search for an ultimate rational truth is driven by his own fear of inheriting his uncle’s madness, a terror not helped by the number of philosophers he approaches who also go bonkers – Frege turns into a frothing anti-semite and Cantor winds up in an asylum babbling about Joseph of Arimathea. This theme gives the sometimes dry talking-head arguments enough emotional tension to turn the story into a cracking narrative. It’s a bit overdone towards the end, the authors dropping in references to Aeschylus’s classic tragedy Eumenides to make the rather tendentious point that ‘existence is chaotic’. Even so this is a smashing book.  The artwork is wonderful – full colour Hergé-style graphics turn Logicomix into a gorgeous read. 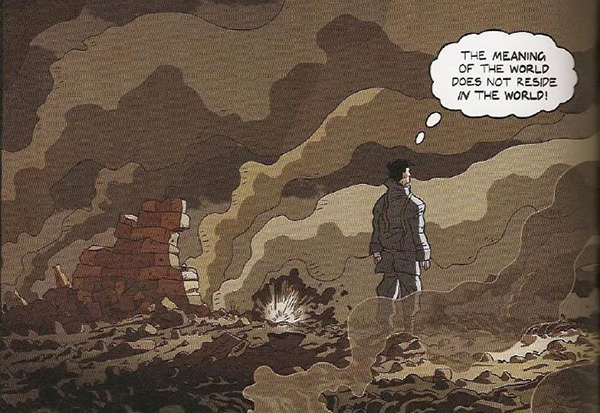 Lovelace and Babbage takes a completely different approach. In many ways Padua has an easier subject to deal with – not only is the Analytical Engine fascinating in its own right but the characters of Charles Babbage and Ada Lovelace and their interactions are a perfect vehicle for quirky comedy. We actually know little about Lovelace and Babbage’s work on the unfinished calculating engine and its proto-programming language, most of it coming from Ada Lovelace’s notes to Babbage’ writings. They were clearly as mad as each other. Babbage was an outrageously self-promoting mathematical genius who conned the British government into giving him vast amounts of cash until they twigged that his Difference Engine would probably never be made. Ada Lovelace comes across as part badly-dressed nerd and part romantic wild child, tainted by association, if not reality, with her father Lord Byron’s mad poetical nature. They also knew everyone – Babbage throwing soirees for all the fashionable chatterati of Victorian London 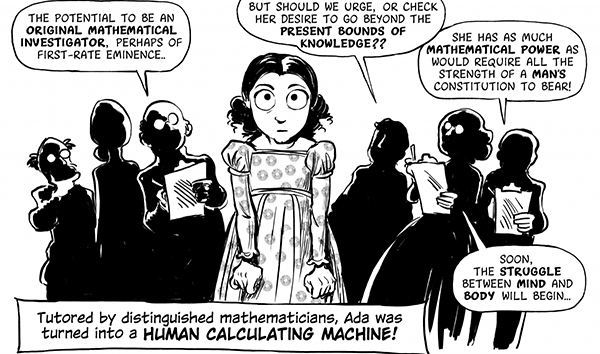 Having set the real-world scene as far as she can, Padua cleverly pops Babbage and Lovelace into an alternative steampunk universe where the Analytical Engine gets made and the pair set themselves up as calculating consultants to a steady stream of famous people who bring them the problems of the age to solve – Wellington, Brunel and George Eliot to name a few. Economic theory, lexical analysis and imaginary numbers are fed into the astounding machine, usually causing it, and occasionally time and space, to go off on one. As I mentioned before much of the book’s fascinating charm comes from Padua’s copious notes explaining the theory and mechanisms of the Analytical Engine and trying to make sense out of the tantalising glimpses into Babbage and Lovelace’s relationship that survive in brief letters and other fragments. Lovelace and Babbage is drawn in a looser, more cartoony monochrome style than Logicomix. The characterisation is brilliant, and the dynamic between the two protagonists reminds me of Bill Watterson’s comics, with Lovelace playing Hobbes to Babbage’s Calvin. It might be coincidence but the very last frame reads like a tribute to the end of It’s a Magical World.

So for anyone with the slightest interest in science, maths or philosophy here are two brilliantly executed and very intelligent graphic novels – wildly different in style and approach but both achieving the remarkable goal of throwing light on some of the more perplexing ideas, visions and visionaries of the 19th and 20th centuries.

Here’s the Amazon link for Logicomix