The Saga of Noggin the Nog

In the lands of the North, where the Black Rocks stand guard against the cold sea, in the dark night that is very long the Men of the Northlands sit by their great log fires and they tell a tale…

The TV adaptation of Game of Thrones is impressive in its complexity, sweep and intelligence, but there is one fantasy series that will never be bettered – The Saga of Noggin the Nog.

Noggin the Nog was a children’s TV series of 5 minute episodes, usually broadcast on BBC 1  just before the news at 5:45pm. They were the creation of Oliver Postgate and the artist Peter Firmin, who together formed the animation studio Smallfilms in 1959. Their charming, quintessentially English cartoons are now recognised as classics of the Golden Age of kids’ TV in the UK.

Oliver Postgate’s voice always sounded sinister to me, even when he was narrating the most innocuous of children’s tales. I wouldn’t have been at all surprised if he’d finished one of his wonderful TV short movies with ‘Have the lambs stopped screaming, Baby Clanger?’.

When he died in 2008 a lot of attention focused on The Clangers and Bagpuss. This is understandable as they were at the hi-tech end of Smallfilms’ output. They were in colour, glorious 3D and are still available on DVD or through iTunes. In terms of sheer spaced-out barminess, The Clangers, with its musical boats, iron chickens, soup dragon and wooly rats swearing at each other via swanee whistles made the average Ken Russell film seem like a rather dull Merchant Ivory movie. Noggin the Nog was one of the earliest Smallfilms series and is a much simpler combination of very basic animation and charming watercolour stills.

Noggin the Nog reached its heyday round about the time I was beginning to make sense of children’s TV. I must have been about four when the seemingly random images from the box in the corner started to assemble themselves into recognisable stories, and they scared the living daylights out of me. There is an underlying, faintly sinister darkness to Noggin the Nog. It begins with an image of waves battering dramatically against the entrance to a fjord, followed by a group of Vikings huddled by a fire listening to stories. The characters were based on the Lewis Chessmen. My parents had four of these, a King, the Queen, a Knight and a Warrior. Seeing them come to life, garner personalities and move jerkily across the screen was as exciting as it was scary. 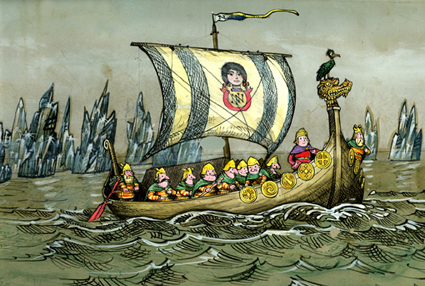 The story that entranced me the most was The Firecake. The inventor Olaf the Lofty invents gunpowder and tests it on a ring of stones in the mountains. These turn out to be the heads of stone giants imprisoned in the ground by a magic sword. One of the giants wakens and befriends Noggin’s little boy Knut. At night the giant carries Knut through the town and up to the ring of stones, giving him magic powers so he can see through stone. Meanwhile Nogbad, Noggin’s wicked uncle, steals the firecake with the intention of retrieving the magic sword for his own nefarious ends…

It’s a testament to the storytelling power of Oliver Postgate that he could make a simple little black and white stop-motion animation so utterly entrancing. At the age of four I imagined myself as Knut, cradled in the arms of a sad, and scary, stone giant that carried me away from home while singing a mournful lament that only I could hear. I probably didn’t sleep for a week.

Fortunately all of the Noggin the Nog stories are available on region-free DVD from The Dragon’s Friendly Society. Please support them and help keep the legend of Noggin the Nog alive by buying the DVD, you won’t regret it. Charlie Brooker sums up the genius of Olive Postgate in a tribute here. Here’s a link to the official Smallfilms site and here is Neil Jones’s tribute to Noggin the Nog. Finally here’s the beginning of the very first episode.