The Prisons of Piranesi 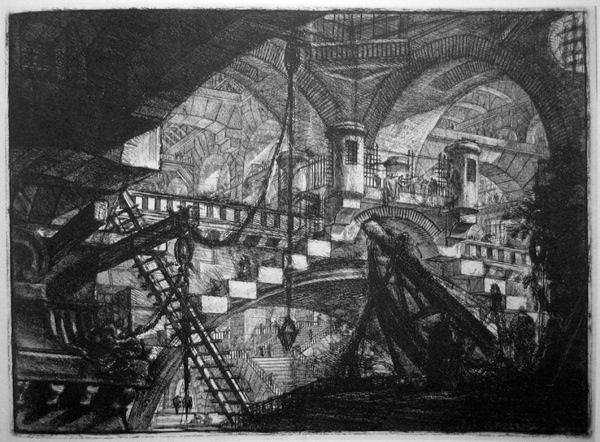 Anyone watching TV would think that the late 18th and early 19th centuries were full of demure young ladies taking tea and unfavourably comparing the balls of Bath with the balls of Highbury. Both the BBC and Jane Austen have a lot to answer for, forever embedding the notion that England was locked in fifty years of Regency propriety where the most traumatic thing ever to happen was when old Mr Woodhouse felt a draft down the back of his neck. In reality, the bulk of literature and art produced during what we now call the Romantic period was resolutely dark, horrific, passionate, often drug-addled and frequently downright bonkers. After all, this is the era that saw the beginning of both the Horror genre (with the Gothic novel) and Science Fiction (Mary Shelley’s Frankenstein). In the year that Jane Austen started writing, one of the most popular novels was The Monk (1796) by Matthew Lewis, in which an evil friar rapes a young woman on a heap of corpses. It’s important to remember that books like this were mainly read by precisely the young middle class women that populate Austen’s books, a fact she gleefully makes fun of in Northanger Abbey.

So while Jane Austen penned her novels of sensibility on pieces of paper small enough to hide under a book when someone came into the room, most other writers and artists were tanking up on opium and committing their magnificently deranged visions to text and canvas. Coleridge took opium ‘for toothache’, and came up with Kubla Khan (1797). His friend Thomas DeQuincey, faced with the prospect of writing about a trip with the postman (The English Mail Coach (1849)), downed some Laudanum to kill the boredom. His essay is probably the first recorded acid trip in artistic history (if we discount the mad visions of the 12th century Abbess Hildegard von Bingen). Not only does the coachman turn into a cyclops but the coach ends up hurtling through a titanic cathedral based on the equally barmy visions of the artist Giovanni Battista Piranesi. 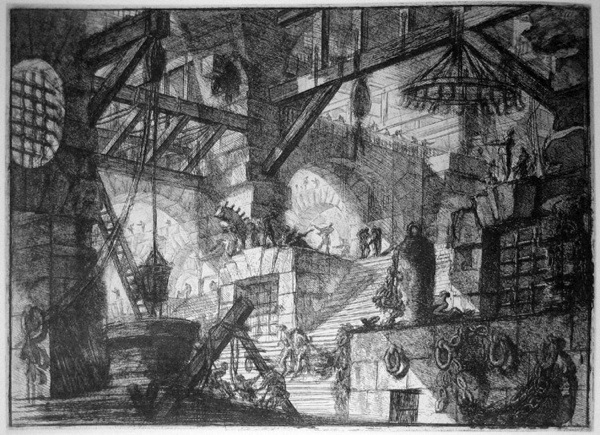 Which is a long-winded introduction to Piranesi himself, one of the most influential fantasy artists of the eighteenth century. The Romantic era was partly a reaction against the Enlightenment idea that calm, measured Reason was the foundation of society. Fed up with classical order, writers and artists like Piranesi went hell for leather in the opposite direction. Instead of Reason they embraced Dreams and Madness. Instead of order they turned to nature, and instead of a world where man and his civilization stood supreme, they created landscapes where tiny figures struggled amid the immense ruins of the ancient past.

Size mattered. Piranesi produced etchings of Roman ruins and deliberately made them three times bigger, the implication being that a) ancient civilisation was huge and powerful and b) the bigger the ruin the greater the hubris of pitiful man in the face of a remorseless cosmos. From 1745 onwards Piranesi produced his most disturbing prints, the Carceri d’invenzione or ‘Imaginary Prisons’. Sixteen pictures show the interior of vast prisons, littered with arches, stairways, pulleys, ropes and various relics of classical antiquity. Tiny figures struggle in these huge illogical interiors, including, according to Thomas deQuincey, Piranesi himself: 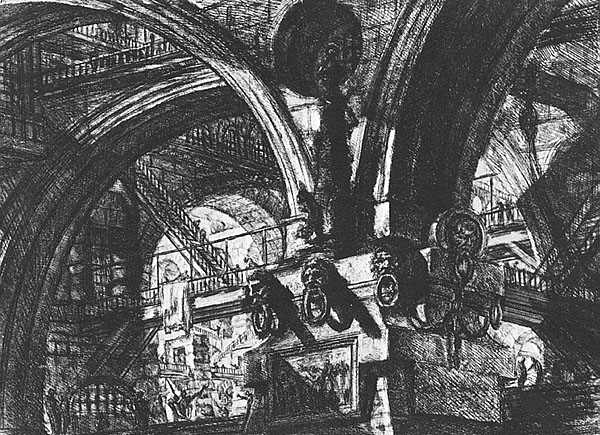 Creeping along the sides of the walls, you perceived a staircase; and upon it, groping his way upwards, was Piranesi himself: follow the stairs a little further, and you perceive it come to a sudden abrupt termination, without any balustrade, and allowing no step onwards to him. (Confessions of an English Opium Eater, 1820).

The Prisons of Piranesi are fascinating, not least because the angle of the viewer is always such as to imply that these vast interiors go on forever. Like Mervyn Peake’s Gormenghast, they speak of an endless world of stone and ritual in which tiny mortals live out lives that are utterly insignificant. They had a huge influence on the Gothic novel, especially the first one – The Castle of Otranto (1764) – with its giant armoured ghost glimpsed on a huge staircase. Even in Chris Foss’s mighty spaceships and cities I think we can see echoes of Piranesi. In Thumb the stone fortress known as the Carceral Archipelago is essentially a Piranesi construction.

2 responses to “The Prisons of Piranesi”