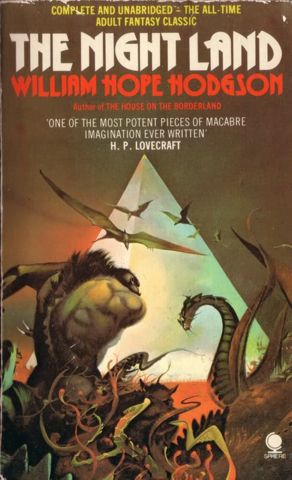 The Night Land (1912) has to be one of the oddest books ever written. It was penned by William Hope Hodgson, an English author who produced a small collection of macabre stories just before World War One. He belongs to a group of Edwardian fantasists who, between them, created a number of strange, elegiac books at the tag end of the Pre-Raphaelite movement: George MacDonald(Lilith and Phantastes), David Lyndsay (A Voyage to Arcturus), Lord Dunsany (Time and the Gods) and E. R. Eddison (The Word Ouroboros).

William Hope Hodgson’s most famous book is The House on the Borderland (1908), but The Night Land is his most impressive and powerful work. It is also, unfortunately, his most unreadable.

The novel begins in 17th century England. The hero falls in love with a beautiful woman, the Lady Mirdath, who dies. Overcome with grief he swoons into a strange trance that transports his mind into that of a man living in the distant future, long after the sun has perished. In the eternal night that grips Earth the last few remnants of humanity live in a vast pyramid called The Great Redoubt, surrounded by an electrical barrier that keeps out the bizarre creatures that populate the rest of the world. On hearing a distress call from another pyramid, the hero ventures out into the Night Land to rescue the last survivor, who, incidentally, is the re-incarnation of his dead Elizabethan lover.

The story and characters play second fiddle to Hodgson’s evocation of a viciously hostile landscape plunged into perpetual darkness and filled with a vivid bestiary of sub-humans, monsters and spirits: the House of Silence; The Country Whence Comes The Great Laughter; the Thing that Nods and the Road Where The Silent Ones Walk, to name a few.

The problem with the book is that Hodgson chose to write it in a bizarre parody of what he thought was 17th century prose. It reads like a Puritan confessional, such as John Bunyan‘s Grace Abounding to the Chief of Sinners (1666), and unless you’re a fan of the often turgid, repetitive and tortuous style of that era then The Night Land is very heavy going indeed. Here’s an example of both Hodgson’s wonderful imagery and his excruciating prose:

Beyond these … was the enormous bulk of the South-West Watcher, and from the ground rose what we named the Eye Beam—a single ray of grey light, which came up out of the ground, and lit the right eye of the monster. And because of this light, that eye had been mightily examined through unknown thousands of years; and some held that the eye looked through the light steadfastly at the Pyramid; but others set out that the light blinded it, and was the work of those Other Powers which were abroad to do combat with the Evil Forces. But however this may be, as I stood there in the embrasure, and looked at the thing through the spy-glass, it seemed to my soul that the Brute looked straightly at me, unwinking and steadfast, and fully of a knowledge that I spied upon it. And this is how I felt.

For those who bothered to read it The Night Land had a huge impact, especially on American horror writers of the 1920s like H. P. Lovecraft and Clark Ashton Smith, who both sang its praises. Understandably, given its bizarre style, it’s had a chequered publication history. But if you can struggle through the text (and after a while you do get used to the rhythm of the writing) then it is a book that stays with you long after you’ve put it down.

There is a website dedicated to The Night Land here and the Project Gutenberg e-text version is available here.