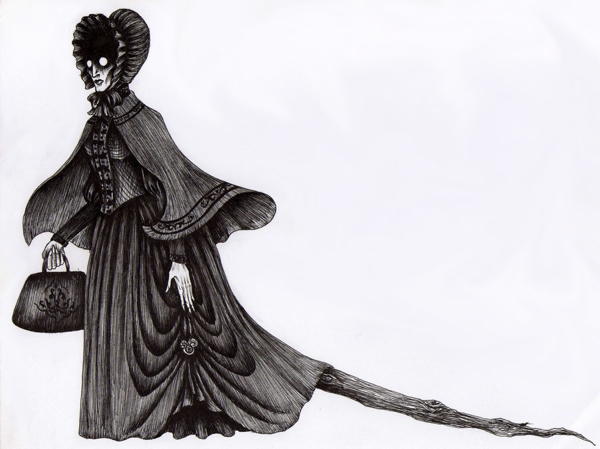 The New Mother, by Verreaux (deviantArt.com)

One of the most disturbing children’s stories ever published is “The New Mother” by Lucy Clifford. It appeared in the anthology of tales Anyhow Stories, Moral and Otherwise, published in 1882. In the tale two children, Turkey and Blue Eyes, live with their mother and baby in a cottage. The children are tempted to be wicked by a strange, wild little girl who promises to show them a miniature dancing man and woman if they perform a series of surreal acts of mischief. The first time they misbehave their mother tells them that if they continue to be naughty she will have to go away, and a New Mother will come. The girl goads them on to more bad deeds so their mother solemnly kisses them and leaves, taking baby with her.

Sure enough the New Mother turns up. She has a black bonnet, glass eyes, carries a doctor’s bag and has a long wooden tail. When the children try to bar the door against her she uses the tail to break it down. Turkey and Blue Eyes flee into the woods, forever barred from their home which now belongs to the New Mother.

And still the new mother stays in the little cottage, but the windows are closed and the doors are shut, and no one knows what the inside looks like. Now and then, when the darkness has fallen and the night is still, hand in hand Blue-Eyes and the Turkey creep up near to the home in which they once were so happy, and with beating hearts they watch and listen ; sometimes a blinding flash comes through the window, and they know it is the light from the new mother’s glass eyes, or they hear a strange muffled noise, and they know it is the sound of her wooden tail as she drags it along the floor.

In terms of sheer bed-wetting terror there’s little else capable of playing on childhood fears as effectively as this story. In many ways it anticipates Neil Gaiman’s Coraline with his black-buttoned eyed ‘Real Mother’. The New Mother herself is a very interesting combination of imagery. The black bonnet, glass eyes and doctor’s bag are bad enough, but the wooden tail suggests that the newly discovered dinosaurs might have had an influence on Lucy Clifford’s story. The Victorians were dinosaur-mad, hence the Crystal Palace Dinosaur garden of 1854. Darwin’s On the Origin of Species suddenly took these terrible lizards and plonked them in a family tree with humans at one end and flashing-eyed monsters at the other.

The New Mother is an evocatively weird image; a combination of creatures from the dawn of time, a child’s nightmare imagery and an early ‘Mensch-Maschine’. I’ve given her a small role in the sequel to Thumb, Ragged Claws, because I think she deserves a chance to keep terrifying children, and the rest of us, right up to the very end of time.

I’ve uploaded a pdf copy of Anyhow Stories, which you can download here (it’s 12.5 mb). It contains the original illustrations. Apparently there is a Kindle Version available, though I can’t find it on Amazon. If I track it down I’ll either link to it from this blog or put it up on Amazon myself.

The wonderful illustration at the top of this post is by Verreaux from deviantArt. You can order prints of his fantasy and horror art by clicking this link.

← Bruce Pennington
Peter Bradshaw – I spurn you as I would a Calot! →