The Monster of Lake LaMetrie

Following on with the Victorians and Dinosaurs theme, one of the strangest science fiction stories I’ve ever come across is The Monster of Lake LaMetrie by Wardon Allan Curtis, first published in Pearsons Magazine in September 1899. The plot is completely absurd, but wrapped up in this short narrative is a fascinating series of revelations about the mindset of the Victorians. In the space of a few pages the tale covers just about every late 19th century hang up that the recent discoveries in palaeontology and evolution brought bubbling to the surface.

In the tale Dr McLennegan and his friend Framingham, journey to the remote Lake LaMetrie in Wyoming looking for creatures from earth’s ancient past. Framingham suffers from indigestion which occasionally drives him to frantic measures. One day Dr McLennegan is pottering on the shores of the lake alone (Framingham being confined to bed by a particularly bad attack of dyspepsia) when he is surprised by an Elasmosaurus. In his astonishment he does what every self-respecting Victorian scientist would do when confronted with a rare living dinosaur and hits it with his machete. He manages to lop off the top of the skull, while merely stunning the creature, and makes the remarkable observation that the brain pan is identical in size to that of a human (you can see where this is going). 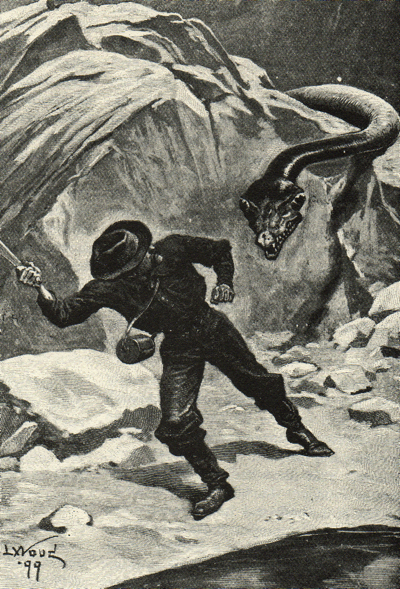 Later on Framingham, completely out of Rennies and unable to bear the indigestion any longer, kills himself, but the quick-witted Doctor takes out his friend’s brain and puts it into the Elasmosaurus’s head. Within a few days Framingham is completely at home in his new body and bellowing Gregorian chants. Yet, alas, the inevitable happens and the brute beast slowly overcomes the refined mind of the scientist. In the end the creature eats his friend. At that point a company of soldiers turn up en route to hunting down some Native Americans. They blow it to bits with their cannon, which is what every right-thinking person would do when confronted with a living dinosaur capable of speech.

Its remarkable how the story encapsulates so many late nineteenth century wrong-headed attitudes to man and nature. Rare specimen from the dawn of time – shoot the bugger, or at least belt it with a machete (while on the way to kill a few Indians). Wrapped up in the description of Framingham’s descent into bestial monstrosity is a whole set of class assumptions. To begin with the intellectual and sensitive Framingham sings Gregorian chants and Greek classics. As the savage brute gains ascendancy refined comments are replaced by “boisterous and commonplace conversation (that) betrays a constantly growing coarseness of mind”, probably including indelicate references to young ladies of their mutual acquaintance. The implications are that “slangy and diffuse iterations” demonstrate a soul further down the evolutionary scale.

The Victorians were fascinated by dinosaurs for a whole host of reasons often obscured by the Darwin vs Church debate that dominated the latter end of the century. Antediluvian creatures held a powerful resonance for a number of reasons:

1) They introduced a vast time scale into the order of things. No longer did history consist of 6000 years dominated by human civilisation. History was now a deep abyss of eternity against which human struggle was tiny and insignificant. In this new order God was conspicuously absent.

2) Dinosaurs were linked to humans by evolution. By implication there was a bit of dinosaur in everyone, a primordial beast waiting to spring forth (this later fed into the beginnings of Freud’s theories of the unconscious).

3) They reinforced the idea of evolution as a Great Chain of Being set on its side. It didn’t take much effort to slot humans into this evolutionary ladder with white Europeans at the apex and other ‘races’ set at convenient points further down the scale. Essentially the closer to the dinosaur Framingham moves, the less ‘refined’ and more ‘working class’ his conversation becomes.

The Monster of Lake LaMetrie is a completely daft, but fascinating tale of dinosaurs. Of course Conan Doyle did a far better job with The Lost World in 1912, but for a quick giggle and an insight into the Victorian attitude to monsters from the past Wardon Allan Curtis’s tale is hard to beat.

The Project Gutenberg e-text of the story is available here.

Stephen Prickett’s Victorian Fantasy is a classic study of the genre, though ridiculously priced, and contains a section on the Victorian obsession with dinosaurs.