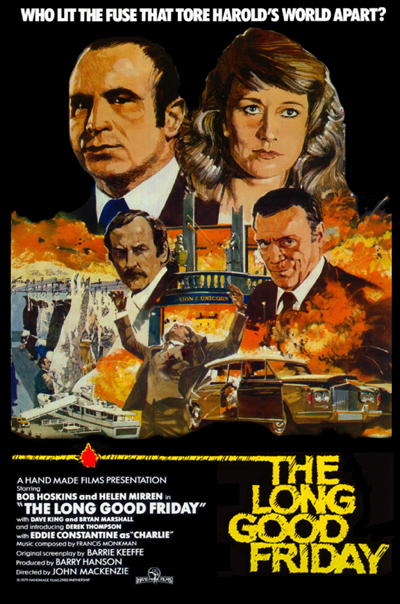 This week I learned that the English actor Bob Hoskins is retiring because of Parkinson’s disease. It’s sad news. I’ve always admired his work so I thought I’d talk about what I think is his best film, and possibly the best British gangster movie ever made: The Long Good Friday (1980). American audiences will probably remember Hoskins for his role as the detective Eddie Valiant in Who Framed Roger Rabbit (1988). The Long Good Friday hasn’t been seen much outside the UK for a number of very interesting reasons.

Without giving too much away the film is about the East London gangster Harold Shand. After defeating his rivals to become boss of the London underworld Harold is on the verge of becoming a legitimate businessman, investing in the development of London docklands in co-operation with the American Mafia. Over an Easter weekend his plans start to spectacularly unravel when he comes under attack from unknown forces. As his gang gets wiped out he struggles to keep control of his disintegrating empire.

The film is gripping, realistic and brutal. It also perfectly captures the spirit of 1980; the sense of British post-war communities collapsing as the economy deteriorates, and the appearance of a new breed of callous yuppie businessmen who value money above all else. Harold Shand is trapped between these two worlds, nostalgic for a mythical golden age of honourable villainy while trying to recast himself as a successful entrepreneur. “This used to be a decent street. Nice families. No scum.” the gangster boss muses at one point with no sense of self-irony. 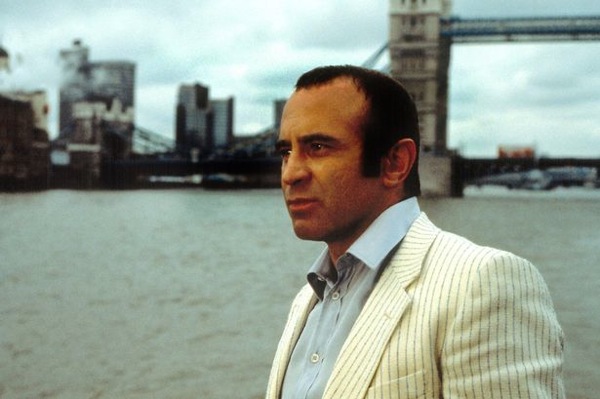 In the 1950s and 60s the London East End gangland was ruled by the Kray twins, Ronnie and Reggie. They were tolerated to the point where they became virtual celebrities, associating with Swinging Sixties icons like Frank Sinatra, Diana Dors and David Bailey (who photographed them). As is often the case, the police preferred organised crime to anarchy as the Krays kept  the petty criminals in line (the same principle can be seen at work in the relationship between the Japanese police and the Yakuza). The Krays promoted the warped myth of gentleman villains; the East End gangsters with a perverse sense of honour, who only harmed ‘their own’ and who, at heart, were a bunch of loveable ‘diamond geezers’ instead of a set of nasty thugs who murdered and maimed people for the most trivial reasons.

The Krays were finally sent to prison in 1968. Barrie Keeffe, screenwriter of The Long Good Friday took as his starting point the question “Who stepped into the power vacuum left by the Krays?” Bob Hoskins’ Harold Shand is the new face of ‘legitimate’ villainy, but in the late 70s early 80s there are other powers with their eye on the East End.

The film almost never made it to the big screen. The original company that financed it, Black Lion Films, decided they wanted to send it straight to TV. This immediately caused massive problems because the film also deals with the Irish Republican Army (IRA). In the 70s and 80s the IRA ran a bombing campaign on mainland Britain culminating in an attack on Hyde Park in 1982 and the attempted assassination of Margaret Thatcher at the Conservative Party conference in 1984 (I was a student living in Brighton at the time and I remember hearing the bang as the bomb went off). It was a politically sensitive topic. Under a hard-nosed Tory government the only way the movie could be shown on TV was after it had been censored to remove all references to the troubles in Northern Ireland, which turned the whole thing into a confused, butchered mess.

The second problem with the movie was that people unfamiliar with London Underworld slang found it very hard to understand what anyone was saying. The language of the East End gangsters is hundreds of years old. Some of it is recognisable as Cockney Rhyming slang, but a lot of it is specific to the world of the villains. When spoken in Bob Hoskins’ thick London accent it’s even more incomprehensible. “I want a top catcher from every manor,” Harold tells his men, “And I don’t want no punters!” Here’s another example, where he berates the Mafia.

In a panic the company dubbed Bob Hoskins’ voice with another actor’s for the US release. Realising they were losing control over their movie the producer, Barry Hanson, and Bob Hoskins hid the print and went on a frantic hunt to find someone prepared to buy the film from the original studios. Luckily George Harrison’s company, Handmade Films, stumped up the money for The Long Good Friday and it had an uncut, un-dubbed cinema release.

It was hugely influential, inspiring such movies as Sexy Beast and Lock, Stock and Two Smoking Barrels. Where it stands head and shoulders above the others is in its refusal to glamorise East End villainy. Harold Shand is witty and likeable, but ultimately a vicious, dangerous thug whose legacy of brutality destroys everything around him. It’s also a politically astute film, taking Thatcherite philosophy to its perverse extreme, and throwing in the Northern Ireland conflict for good measure. Guy Ritchie’s films, with their glorification of ‘Rock n Rolla villains’ are trite and adolescent in comparison.

Bob Hoskins’ Harold Shand was his finest creation. In later films, including the award winning Mona Lisa his characters became more vulnerable and comic. Unfortunately in the US this set him up against Danny DeVito who was playing similar roles, leading to comparisons between the two. He still shone as supporting actor in films like The Honorary Consul but none of the parts he played came anywhere near the tragic monster Harold Shand.

The film’s available on iTunes or DVD. If you need a guide to what the verbals is on about then you can get the screenplay here.

The music is fantastic as well – this is the last scene but be careful, it has a major spoiler in it.