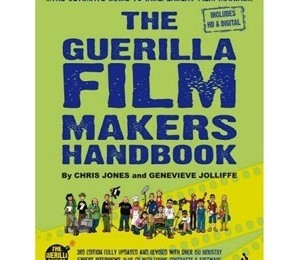 If there is one book that should be banned as dangerous and subversive it’s The Guerilla Film Makers Handbook by Chris Jones and Genevieve Joliffe. Read this and you will seriously consider leaving your job, re-mortgaging your house and borrowing from all and sundry to make a movie. Jones and Joliffe were two film students at Bournemouth Film School. Frustrated by the difficulties thrown in their way when they actually tried to make a film they dropped out of their courses and set out to write, direct and produce their own independent movies. Based on their experiences, and that of others, they put together The Guerilla Film Makers Handbook as a guide to anyone wanting to put together a feature film.

It’s essentially a series of interviews and case-studies covering literally every aspect of film making from Pre- to Post-Production. I used the book myself when I co-produced the movie Let’s Do Talk (“Very Offensive” – The Japan Times) in Japan and it was full of invaluable advice (for example the top costs for a movie are 1) film stock and 2) catering – keeping a crew of over a hundred happily fed on a punishing daily 20-hour shooting schedule is a nightmare). The best thing about the book is that it is totally practical. There’s no special system of story-telling, no distracting fluff about how to make the ‘ideal’ hollywood or art-house film, it’s a pure nuts and bolts guide to getting the film in the can and off to the cinemas (e.g. How big a van do you need to transport film kit? How do you use trace and spun to diffuse lighting?). When your lead camera-man has just stomped off set in an amphetamine-addled tantrum or you quickly need to find a 3D software package to build the Walls of Troy (don’t ask) this is the kind of guide you want.

The second half of the book is devoted to case-studies, including the author’s own first feature The Runner (starring Harrison Ford’s not-quite-as famous brother, Terence Ford – because he was American and Cheap). My favourite story had Joliffe managing to persuade the Royal Air Force to fly out three helicopters for the final sequence for free, only to have the footage cut because they had RAF insignia and the film was supposed to be set in the US.

So avoid this book like the plague because, like the fabled Necronomicon, it will suck you in and steal your soul. If you do decide to go ahead then it really is the best guide to film-making you can put your hands on. Beware though, in the final days of shooting Lets Do Talk one of the lead actors took me to one side and said, in all seriousness, “John I’ve been so impressed and inspired by what you’re doing here with this film that I’ve decided to leave my wife and children, go back the US and become a full time writer.”

You have been warned.