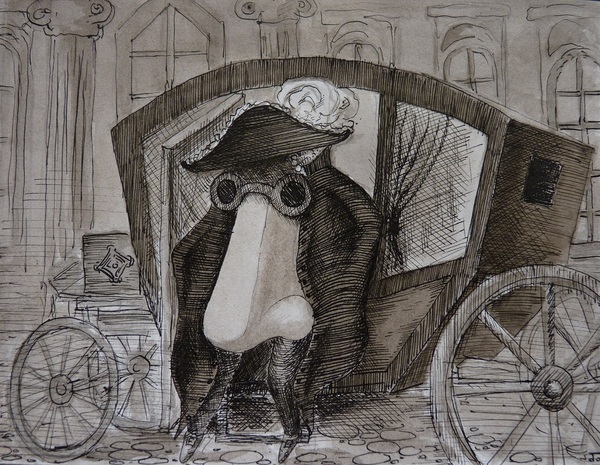 This is the first in a series of posts looking at the Grotesque in literature and art. It’s a subject that’s fascinated me for years (in fact I wrote my Masters thesis about it during the time of the Old Republic). I thought I’d kick off by trying to understand what makes something in writing or painting Grotesque, as opposed to fantastic or horrific. It’s probably a good idea to begin with the origins of the word itself.

At the height of the Italian Renaissance explorers and enthusiasts of Classical Antiquity punched holes in the roof of Golden Dome at the then-buried villa of the Emperor Nero. Inside they found the ancient halls decorated with intricate patterns that combined human, plant and animal forms. They called this re-discovered style of decoration ‘grotesque’, from the Italian word for cave – grotta. Nowadays the word grotesque is used to mean something unpleasantly distorted to the extreme, but it also refers to a specific type of art or literature that hovers on the border between horror and fantasy, yet which really belongs to neither. It’s a rarely-explored sub-genre that lumps together Hieronymous Bosch with Charles Dickens, Kafka and Mervyn Peake. For some reason, during its long history it’s also transformed itself from something associated with peasant carnivals – an exuberant overdose of gluttony, sex and bodily functions that gleefully stuck two fingers up at the established church  – to an art form linked to 20th century alienation, Freudian nightmares and body horror, Kafka’s short story ‘The Metamorphosis’ (1915) being the classic example.

There hasn’t been a vast amount written about the Grotesque in art, but what does exist offers a handy list of characteristics peculiar to the style, which give clues as to why it is both transgressive and disturbing.

1) Normal boundaries between people, animals and things are broken down. The frescoes in Nero’s hall display the decorative end of a spectrum that, at the other end, has Bosch building horrific monsters out of creatures combined with everyday objects. The helmet with human legs and a bird’s beak  at the top of the page is a classic example. God only knows what it’s supposed to be but it’s the stuff of nightmares, simply because those items are not supposed to be together like that, let alone threatening a bloke being kissed by a pig in a wimple.

2) People are described as objects, objects start to appear human. This is a favourite of Charles Dickens and, to a lesser extent, Mervyn Peake. The latter’s Grey Scrubbers who scour the flagstones of Gormenghast’s kitchens in Titus Groan take on the characteristics of the floor they clean – with little pebble eyes and mouths like the cracks between the stones. Gormenghast castle itself, on the other hand, becomes an almost living, breathing entity. Dolls that come to life are favourite and guaranteed to inject toe-curling terror into any tale. Lucy Clifford’s The New Mother (1882) with her glass eyes, doctor’s bag and articulated wooden tale is the grotesque escaped doll turned monstrous parent par excellence.

3) The body itself starts to disintegrate and becomes an object of disgust and alienation. Gregor Samsa turns into an enormous bug in ‘The Metamorphosis’, though his reaction, instead of being OHMYGODI’VETURNEDINTOAF*****GCOCKROACH, is to wonder how he’s going to get out of bed and get to work. In other tales, most famously Gogol’s ‘The Nose’ (1836), bits fall off and take on a life of their own. In Gogol’s tale the hero’s nose escapes and ends up as a senior civil servant

4) Scale becomes distorted, combined with sudden and disorienting shifts of perspective. Giants figure prominently in Grotesque tales, as do images of (chiefly) men lost in vast nightmarish landscapes. Orson Welles captured this rather well in his 1962 version of The Trial when in one scene Josef K (played by Anthony Perkins) steps through a door only to have it grow to an immense size when he’s on the other side.

5) The Grotesque is associated with the perspective of children. This is a characteristic of the later Grotesque and there is a suggestion that writers like Kafka or Dickens suffered from an ‘arrested childhood consciousness’ which made them feel that they were in a world with rules made for everyone else (i.e. adults) and in which they were helpless and child-like victims. I’ll talk about this in detail in a later post but it’s worth quoting Kafka’s ‘Letter to his Father’ (1919) where he hits this particular nail on the head:

Hence the world was for me divided into three parts: one in which I, the slave, lived under laws that had been invented only for me and which I could, I did not know why, never completely comply with; then a second world, which was infinitely remote from mine, in which you lived, concerned with government, with the issuing of orders and with the annoyance about their not being obeyed; and finally a third world where everybody else lived happily and free from orders and from having to obey.

So The Grotesque is a very physical art form that plays on disorientation and alienation – very different from fantasy or classic horror which makes a clear distinction between the normal and the fantastic or supernatural. Later on I’ll look at some examples of Grotesque art, starting with the early, more positive imagery linked to the idea of the carnival or satire, and then delving into the truly nightmarish worlds of Dickens, Kafka, David Lindsay and others.