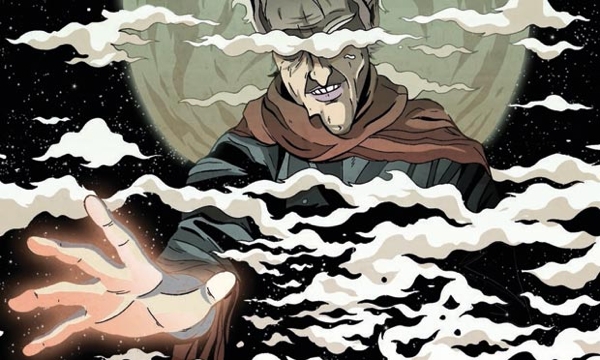 The Folio Society and The Easton Press 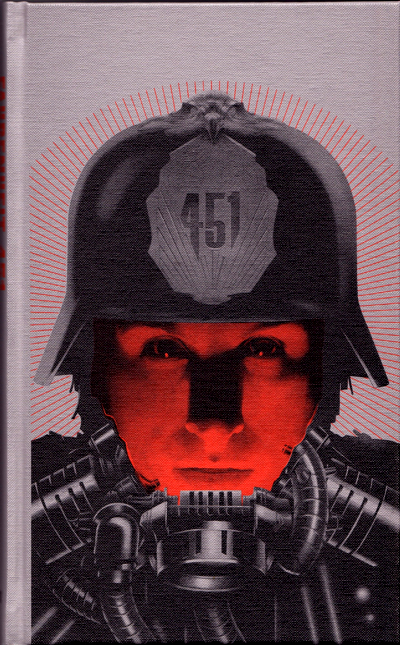 I’ve always been a sucker for beautiful books. Growing up in an arty/literary family meant that every member more or less had their own personal library covering at least one wall of their room. My parents collected  The Folio Society books in particular, so I was introduced them when I was about 7 years old. That one picture I could never bear to look at as a child was the illustration to ‘Count Magnus’ in the Folio collection of The Ghost Stories of M.R. James, so I hid the book behind the fire place so no-one could jump out and wave it in my face at an unexpected moment. I’ve since gone through phases of collecting The Folio Society books over the years, but they rarely published any SF or Fantasy, so a while back I turned across the pond to The Easton Press, who also specialise in swanky editions for collectors. They not only ran a Masterpieces of Science Fiction series but would also bring out occasional runs of other famous books, such as E.E. ‘Doc’ Smith’s Lensman series. For those of you who might be interested in these editions I thought it might be interesting to talk about the differences between the two companies and their approach to publishing classics (and SF/Fantasy).

If we’re completely honest there is a strong element of snobbery behind both companies. The Easton Press in particular seems to be targeting that dying breed, the wise old intellectual Republican patriot who fancies an oak-lined library filled with Harold Bloom’s The Western Canon. It may be hard to believe in the wake of the ignorant nonsense flooding the GOP at the moment, but there is a tradition of the learned establishment thinker or Harvard career academic of the 1950s for whom leather-bound copies of Plato’s Republic etc. are important pieces of cultural capital to be treasured. The books are designed to look like they belong in a dimly lit library with ladders, squishy armchairs and balloon snifters of brandy. They’re bound in real leather with raised bumps across the spine and 24 carat gold lettering. The pages are also edged in gold and you get a silk bookmark to keep your place in First Lensman or Newt Gingrich’s The Essential American (signed in crayon by the writer). Each book contains at least one colour illustration, often by a classic artist (Kelly Freas for Orwell’s 1984, Joseph Mugnaini for Fahrenheit 451). They are hefty tomes and it sometimes takes real effort to open one. You could stun a goat with some of these. The quality of the type varies, sometimes it’s nice and clear, sometimes it looks like it’s been lifted straight from the pages of Planet Stories. 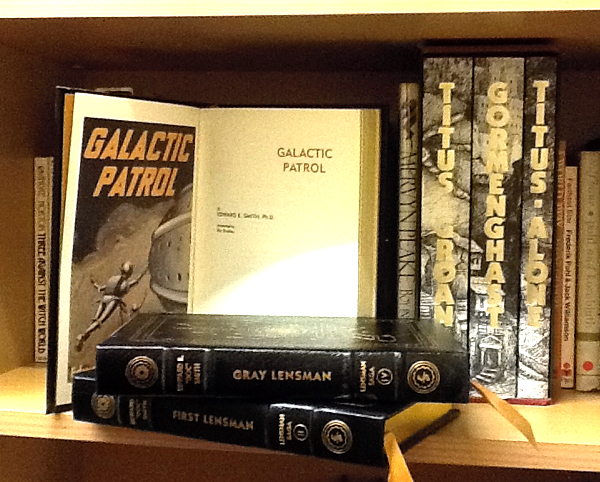 From the Author’s library. Three volumes from The Easton Press Lensman Series rub shoulders with The Folio Society Gormenghast Trilogy.

The nice thing about The Easton Press is that they produced a fantastic Masterpieces of Science Fiction series of about 75 volumes covering most of the major works plus a few unexpected and interesting titles. Frustratingly they printed the first three in Gene Wolfe’s Book of the New Sun series, but not the fourth, so my Citadel of the Autarch is a scrappy paperback stuffed next to cowhide and gold splendour like a poor relation at a wedding. The Masterpiece series is no longer in their catalogue, which is a shame but they also occasionally bring out collections of classic stories (a three volume anthology from Astounding Stories with all the original covers and illustrations, the complete Tom Swift etc.) as well as the aforementioned Lensman books. Although the size of the books varies, overall The Easton Press goes for high-quality uniformity and the kind of construction that means the tomes will last for thousands of years in whatever vault you bury them in. They aren’t cheap, Anne Rice’s The Vampire Chronicles (if you’re into that kind of thing) comes in at an eye-watering $395. Sadly their catalogue seems reduced these days but it’s worth keeping an eye out for their sometimes quirky SF and Fantasy releases. 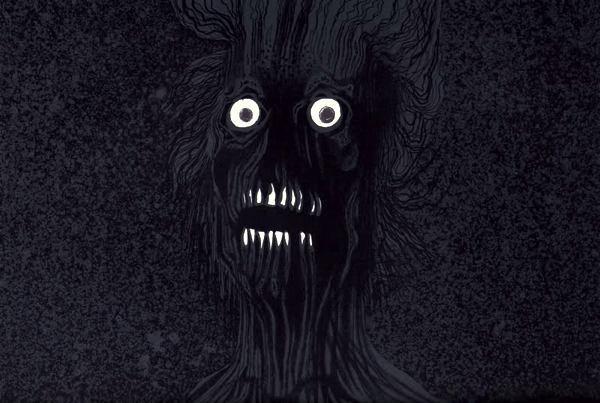 From the Folio Society Ghost Stories of M. R. James. This gave me the heebie-jeebies for years.

The Folio Society, on the other hand, is still going strong and looks like it’s got the largest catalogue it’s ever had. It was forged in the same crucible of snobbery as The Easton Press, appearing in 1947 as a reaction against the rise of the post-war mass market paperback, though its target audience was more the metropolitan intellectual elite (Bloomsbury set or Guardianistas, depending on how old you are). For many years they were happy to advertise themselves with a quote from that grand old dame of reactionary pomposity Malcolm Muggeridge claiming that The Folio Society books were so much better than the tawdry pap bought by commoners in airports on the way to their grubby little holidays in Ibiza or wherever. Thankfully they’ve shed the earlier taint of elitism, mainly by producing books that are real works of art. Unlike The Easton Press, whose conformity of production gets a bit dull after the fortieth cowhide brick thumps onto the mat, The Folio Society designs each volume (or series) from the ground up, making sure that all the elements – binding, illustrations, typography and general look and feel fits in with the book. For example, their Marlowe’s Dr Faustus is a slim evil looking thing in black and red, while the three-volume Steven Runciman History of the Crusades is done in wonderful sand, blue and gold covered boards with fantastic reproductions of medieval art inside.

A nightmare for the obsessively tidy – every Folio book is virtually unique.

I’ve already written about their edition of the Oxford Bestiary elsewhere but it’s worth pointing out the sheer variety of production, though it plays merry hell with any attempt to keep your books tidy. The Folio Society has always faced the dilemma of finding the right balance between printing nice editions of classics that will sell, and bringing out lesser known and therefore less commercially viable works. They’ve managed to find the right balance and sometimes you end up with a completely unusual and rare left-field choice bought purely because the book looked so lovely – in my case Saint Exupéry’s record of his time flying across the Sahara in the 1930s in Wind, Sand and Stars. One of their greatest coups was the Northanger Novels series printed in the 1960s, the once and only reprinting of seven rare Gothic novels mentioned in Jane Austen’s classic tale, including such marvellous titles as Horrid Mysteries and The Castle of Wolfenbach. 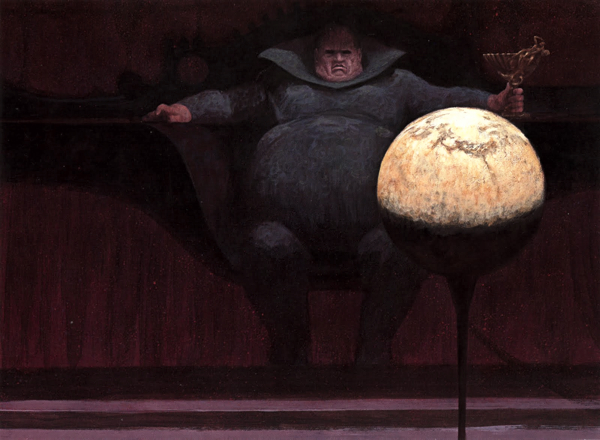 The Folio Society books aren’t always as sturdy as The Easton Press volumes, and sometimes sheer bulk makes them impractical to read in bed. In fact you need a lectern for some. Their Gormenghast Trilogy is beautifully designed but appears to be created to look like three large bricks prised out of the wall of the Tower of Flints. In the past their choice of translations also seemed a bit dodgy – they appeared to favour Victorian translations of writers like Herodotus (possibly because they were out of copyright and therefore cheap) and while they had that tendentious charm of fusty 19th century classics authors there are far better versions available. Having said that they’ve just released the definitive Lattimore and Grene translations of The Complete Greek Tragedies in a five volume set, so all is forgiven. Right now they have more SF and Fantasy in their catalogue than ever before. Without the ghost of Muggeridge to hold them between finger and thumb at arms length with a peg over his nose, Bradbury, Huxley, Ballard, Wyndham and Asimov are all there in their own wonderfully unique editions.

In the end I prefer The Folio Society, even if The Easton Press has produced some brilliant editions of Golden Age SF. It’s exciting getting a Folio Society book because each one is unique. They also are very responsive to their customers – they replaced a couple of flawed copies I received without question. They also listen to feedback. I might be kidding myself but I once sent them a letter suggesting they print Mervyn Peake’s Titus trilogy and a year later there it was. The Folio Society books are marginally cheaper than The Easton Press ones, averaging at around £30 a book. In the past they weren’t that much more than ordinary hardbacks, but the gap seems to have widened. They run sales though, and you have to be quick because all their editions are limited and out of print copies of some books are hard to find.

← Tove Jansson – the Truth about the Moomins
The Grotesque →