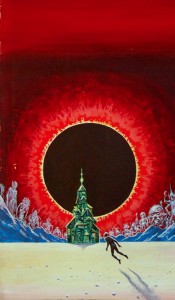 Detail from The House on the Borderland by Ed Emshwiller

Thumb is set at the very end of the Universe when all the stars have vanished and we have entered the phase called the heat death of the universe. Early twentieth century SF writers, overcome with fin-de-siecle angst, often tried out-do each other in constructing visions of the end of the time. H.G. Wells’ time traveller ends up on a lonely beach lit by the rays of our sun in its final Red Giant phase (a scene missing from both films). William Hope Hodgson imitated Wells in a scene in The House on the Borderland (1908) where the hero also speeds through time to the end of the world and beyond. Hodgson went one better with The Night Land (1912) in which the last people live in a huge pyramid, protected by electrical barriers from the creatures that live in the wastelands beyond. In the short story “The Last Days of Earth” by George C Wallis (1901) a husband and wife flop about in robes like a pair of lotus-eaters pondering their dying ice-shrouded world before making a doomed attempt to escape in a special space sphere.

These stories are an interesting combination of Symbolist and Decadent ideas combined with the influence of Charles Lyells’s Principles of Geology (1833). Lyell’s book introduced the idea of deep time, i.e. the earth was billions of years old, not thousands, and so humanity was a tiny part of a vast timeline that stretched far beyond the end of any civilisation we might build. For writers of a Decadent bent, languishing on sofas and drinking absinthe, this was a great source of fatalistic imagery to use in their visions of the future. What’s interesting is that a lot of these books came out before World War One, when civilisation really did seem to collapse, and few appeared after. I think the reason was that self-indulgent Edwardian emo fantasies of humanity fading away from ennui appeared trite in the wake of the sheer political and physical horror of the war. Instead post WWI end of the world books were either assuredly political (as in Olaf Stapledon’s Last and First Men (1930)) or ran back to the comfort of the Pre-Raphaelite Arthurian redemption fantasies of writers like E. R. Eddison.

So what’s really going to happen? Well we know the Earth with get swallowed up by our sun when it turns into a Red Giant in about 5.5 billion years. After that there’s plenty of theories about the end of the universe itself, including the Big Freeze, the Big Rip, the Big Crunch and the Big Bounce. There’s also the Multiverse theory, so it’s good to see Michael Moorcock’s ideas being picked up by Astrophysics. Presumably in that version we all end up wearing top hats, flying ornithopters over some 60s psychedelia landscape and waving demon-possessed weapons at each other.