The Castle of Otranto

There’s one school of thought, kicked off by Brian Aldiss in his book A Billion Year Spree: The History of Science Fiction (1973), that says that Science Fiction and Fantasy as we know it started with Mary Shelley’s Frankenstein. Her novel came at the end of the original Gothic movement in literature, and carried with it a whole bunch of themes and ideas from that genre that still permeate SF. Nowadays the Gothic is used to describe just about anything wearing black lace under a full moon feeling a bit undernourished and hormonal. Between 1765 and the mid 1830s Gothic had a very precise meaning – it referred to the early horror novels (and, on occasion, poems) that flooded the market and were obsessively consumed by the kind of young middle-class ladies that Jane Austen described in her own books (most notably Northanger Abbey). The tome that started it all off was The Castle of Otranto (1765) by Horace Walpole.

The Castle of Otranto had the same effect on the reading public as Fifty Shades of Grey (OK, without the sex). It was overblown, preposterous, badly written and yet it captured the public imagination and spawned an entire movement. To give you an idea of the subtle Hemingway-esque prose here’s the scene when the Princess Hippolita faints after her son is squashed under an enormous helmet that has just fallen from the sky –

The domestics, without observing the singularity of this direction, were guided by their affection to their mistress, to consider it as peculiarly addressed to her situation, and flew to her assistance. They conveyed her to her chamber more dead than alive, and indifferent to all the strange circumstances she heard, except the death of her son.

It doesn’t exactly flow off the page, although readers were more accustomed to this kind of purple prose in the mid-eighteenth century.

Walpole set out to imitate Shakespeare, specifically Hamlet, and to create a new type of novel based on the Jacobean tragedy. Prior to this most literature looked to the Greek and Roman classics for inspiration, emphasising order and decorum. Unfortunately you can only imitate Homer and Virgil so many times and readers were getting bored. The Castle of Otranto was a complete breath of fresh air, and set the model for years to come. The key features of the Gothic as contained in Walpole’s book were as follows:

1) The story was set in a quasi-medieval past dotted with castles and ruins. This was unusual in itself, but the book also claimed to be an original medieval manuscript of an Italian author ‘Onuphrio Muralto’ who Walpole had ‘discovered’. This was partly because the real author didn’t want to be associated with the novel if it bombed. It also set the trend for many Gothic writers to produce ‘authentic’ manuscripts from the past. James Macpherson’s Poems of Ossian (1760) is the most notorious example of this. For years people genuinely thought they were written by ancient Scottish bards. After Otranto the past was no longer filled with polite Romans and Greeks, now it was a romantic wilderness of ruins, wild passions and sexy barbarians.

2) The book had a ghost, in fact it had a whopping huge ghost in armour that stalked about the castle, dropping things on people. You don’t see the whole spectre until the end of the book, prior to that it’s just fleeting glimpses of a hand, a helmet etc. This increased the feeling of unease because it suggested there was some vast Lovecraftian awfulness lurking beyond the darkness, and we petty humans could only ever see fragments. Fragmentation is a huge theme in the Gothic novel and echoes the feeling people had that the old order was collapsing (as it did spectacularly in France in 1787).

3) Helpless heroine and cruel but sexy tyrant. Scratch the surface of any Gothic novel and underneath you find eighteenth century domesticity exaggerated to horrific proportions. At the end of the day most of these tales are about a young girl who is in love with Dopey Hero A and lusted after by Sneering, Sardonic (but dangerously attractive) Villain B, who kidnaps her and carries her off to his castle. Even better if Obstinate Father C is forcing her to marry Villain B against her will. Young Claribel would be reading this while glancing suspiciously across the parlour at her own father who had just brought that nice Parson Simpkins round for tea – and he keeps smiling at her across the cruet set.

4) A vision of the natural world as a place of untamed and terrifying beauty. Restoration society loved ordered gardens in neat rows, modelled on the Italian style. Romantic gardeners dropped fake ruins in their gardens, built secret grottoes and paid ‘hermits’ to live in them and jump out at visitors. Heroines would often pause mid-escape (or in some cases, mid-ravishment) to look up at the storms playing across the Alps and exclaim ‘What a sublime prospect affords itself to the ocular organ!’ (trans. ‘Wow, look at that!’). The word awful is often used to describe scenery – literally meaning that it fills the mind with awe. 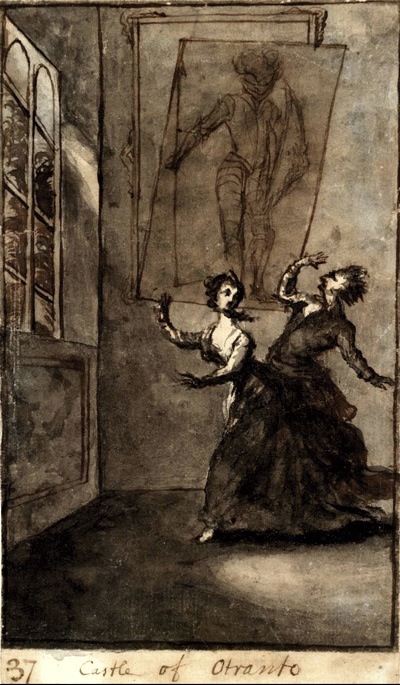 The Castle of Otranto sparked off a flood of imitators, spawned a massively successful commercial genre, and almost single-handedly paved the way for the Horror and Science Fiction novel. The Gothic novel reached maturity with the writings of Ann Radcliffe, whose The Mysteries of Udolpho (1794) is held by many to be the best of the genre. Towards the end there was a move away from Castles and Ghosts towards more introspective studies of human madness (Melmoth the Wanderer (1820) by Charles Maturin and The Private Memoirs and Confessions of a Justified Sinner (1824) by James Hogg being two good examples). Mary Shelley’s Frankenstein is at the tag end of the movement, and lacks many of the standard tropes, but still retains the unsettling ideas of fragmentation, uncontrollable nature and melodramatic themes taken from Jacobean drama and Milton’s universe.