The Art of Peter A. Jones 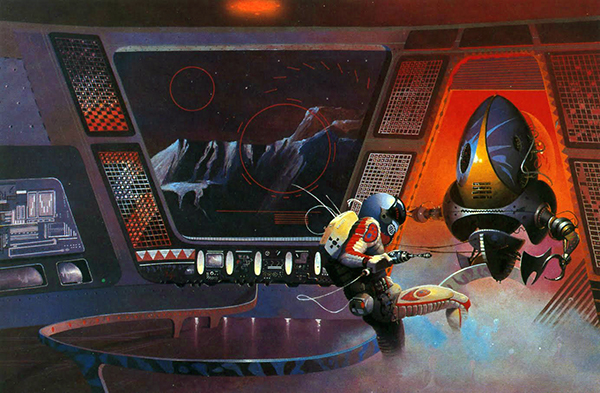 As part of my ad hoc trundle through the greats of 70s and 80s Science Fiction book covers I thought I’d turn my attention this time to the work of Peter A. Jones, or PAJ as he signed himself. Jones came slightly later to the scene than his contemporaries Chris Foss and Bruce Pennington, doing most of his SF work in the mid to late 70s as well as providing some fantastic artwork for Games Workshop and Chaosium. At first glance he appeared to be just another Foss clone dealing in titanic spaceships in tropical fish stripes and dotted with tiny windows and aerials, a false impression that was exacerbated by his signature PAJ which wasn’t a million miles from Foss’s own iconic framed F.

It became clear pretty quickly that Jones was very much a his own artist with a very particular style. He produced a series of striking covers for Panther’s Philip K. Dick novels that showed his greatest strength to be people and aliens, rather than giant lumpy star cruisers. He had the ability to invest the strangest of characters with a dramatic and dynamic energy that few other artists of the era matched, except perhaps Frazetta or Kelly Freas.

His cover to the Panther edition of J. G. Ballard’s Vermillion Sands is a good case in point. Although, like many covers of the era, it bears little resemblance to Ballard’s tales, there’s a cracking sense of drama and narrative in the two figures.

My favorite painting his to be his cover for Larry Niven’s A World out of Time with its wonderful space witch – an inspiration for the characters of Ioam, Nem and Som in The Book of the Colossus.

In general his figure work was more assured than Pennington’s, although on occasion his semi-grotesque depictions of future humans and aliens didn’t quite work. His cover to Larry Niven’s The Long Arm of Gil Hamilton is borderline ridiculous. But at the same time he created some truly memorable characters – such as the alien for Dick’s Clans of the Alphane Moon. His composition emphasised bold curves and bright colours which could sometimes border on abstraction.

Jones worked in oils and acrylics with bold colours, emphasising curves above lines, and giving both his figures and machinery a wonderfully plastic/alloy feel, as if everything was built or woven out of a super tensile futuristic cellophane. His artwork was particularly suited to grand far-future space opera or the baroque science fantasies of writers like Jack Vance.

Peter A. Jones published a book of his paintings, Solar Wind. The original is sadly out of print but a number of high quality enhanced editions are available from his own website, http://www.peterandrewjones.net