The Art of Jack Gaughan 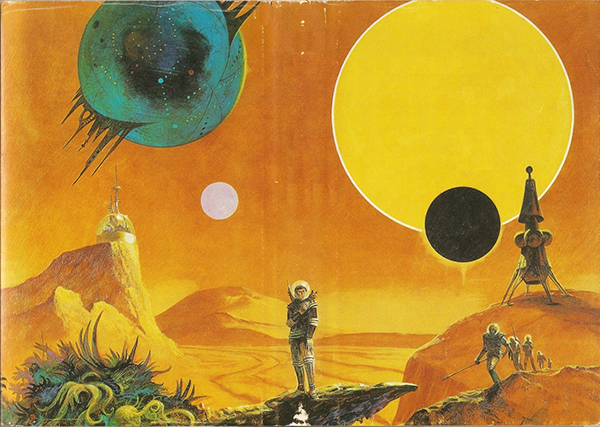 Hot on the heels of Peter A. Jones, here’s my tribute to another great SF artist who, sadly, is no longer with us. The vast majority of science fiction art through the ages has been illustrative, which is not particularly surprising as book and magazine artists have usually either depicted scenes from whatever story they’ve been commissioned for, or tended towards believable depictions of the future, other planets and aliens. Painters, by and large, work solidly in the representational tradition, whether its Frank R. Paul drawing on the science of the day to design his inhabitants of other planets, or Chris Foss with his precisionist machinery and cities, or Jim Burns with his photorealistic portraits of SF and fantasy characters and creatures. 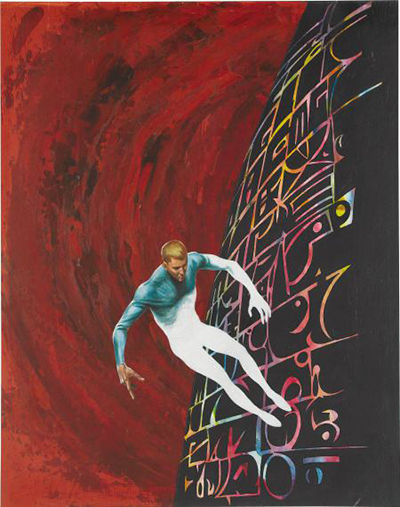 Yet at the same time there are a number of painters who have very successfully bucked the trend towards narrative art and have taken a more non-representational approach. Sometimes this can be because of a publisher’s house style. Penguin SF, for example, set itself apart from the ray guns and spaceships of its rivals with its unique Pop and Op-Art covers of the 1960s and 1970s (wonderfully represented by this postcard collection of covers).

Surrealism was another major influence on some artists, especially Richard M. Powers, who produced a striking series of covers for the Berkley Publishing editions of J. G. Ballard’s books in the 1960s. 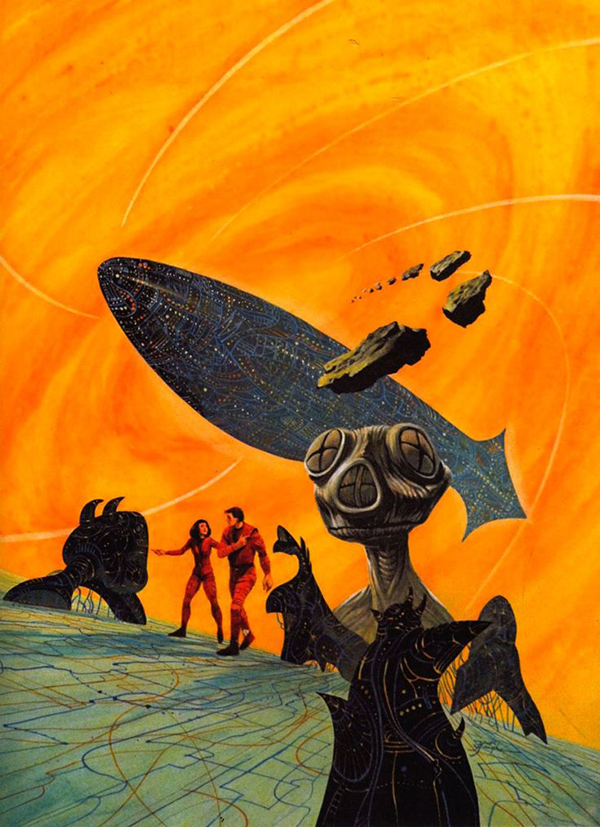 Both surrealism and Pop-Art strongly influenced the work of one of the most successful US SF artists of the 1970s – Jack Gaughan (1930 – 1985). Incredibly prolific, he produced a vast range of instantly recognisable and striking covers for the major magazines of the 1950s – Galaxy, Worlds of If, Analog, as well as books covers for the publishers Ace and DAW. 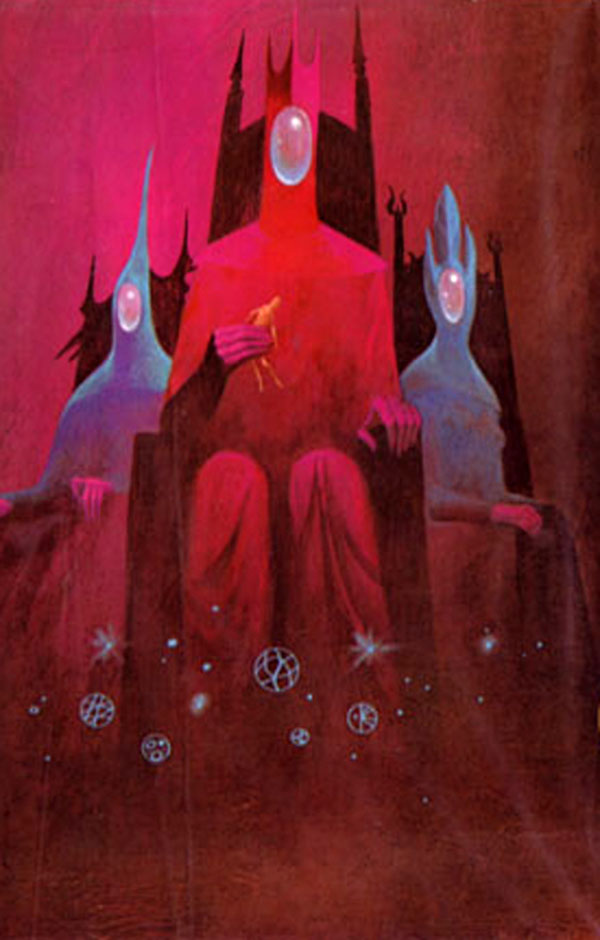 What makes a Gaughan piece instantly recognisable? To begin with he eschewed perspective in favour of a very flat, decorative composition. He would work with a very simple palette, either working in one particular colour scheme or setting up a high contrast of primary colours. This gave his paintings a strong abstract or cubist feel. 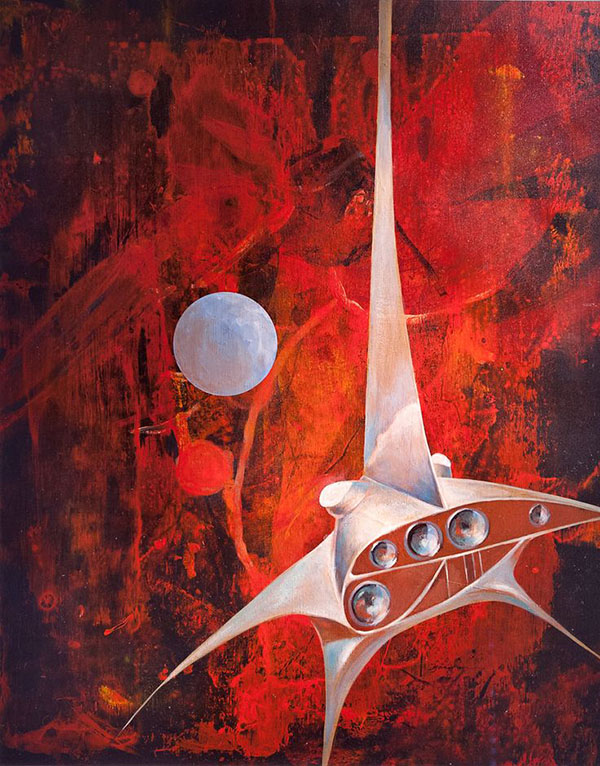 In some cases you can almost see the influence of Jackson Pollock with the random-splatter textures he uses to break up some of the larger background areas. Finally he very rarely uses straight lines. Both his characters and the landscapes they inhabit are built from sweeping curves and dynamic angles, often painted from a low point of view to enhance the feeling of space and energy. 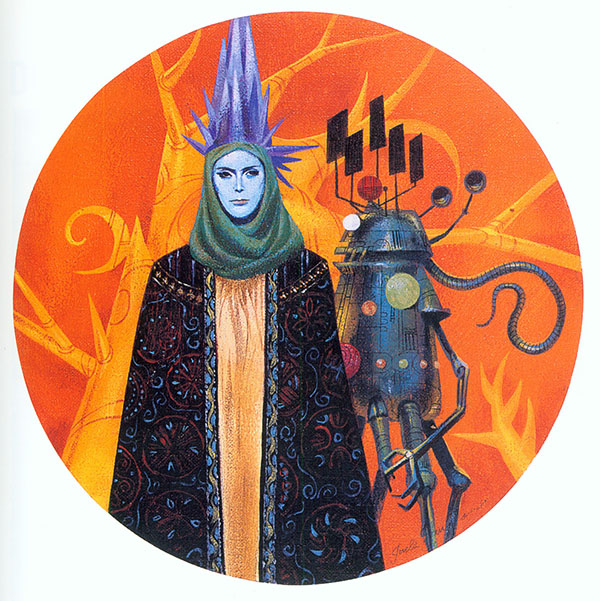 Gaughan produced so much high-quality and iconic art it’s difficult to select favourites. In an age when so much SF book cover illustration is in danger of becoming pedestrian, samey and over-reliant on digital images Jack Gaughan’s work shows how abstraction, a simple palette and dynamic composition could allow one artist to generate a bewildering range of exciting and intriguing images. His Elric of Melnibone is pretty unconventional, and yet manages to capture the weird, baroque intensity of the books to a far greater extent than yet another realistic albino in fantasy armour on a dragon trope. 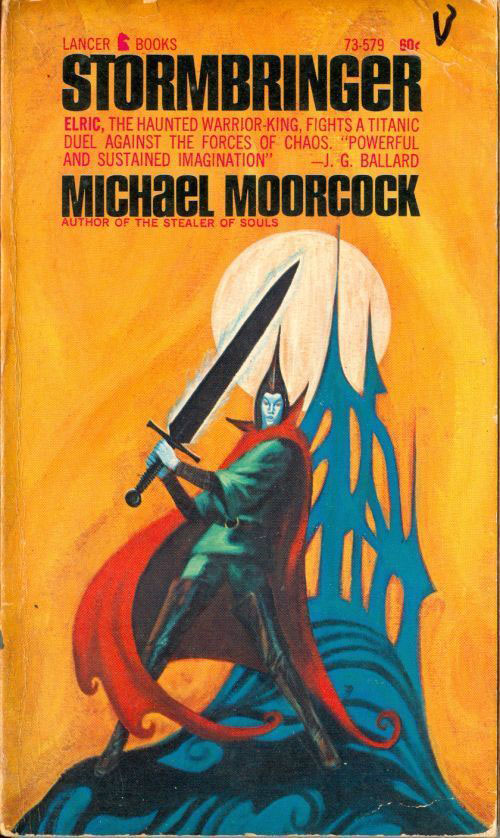 There’s a monograph waiting to be written on Gaughan, or perhaps a book on the whole surrealism/abstraction meets SF Art theme. In the meantime just Google Gaughan to see the stunning range of covers and illustrations he produced.

4 responses to “The Art of Jack Gaughan”