I started reading science fiction round about the same time I got into music, and so being a fairly literal minded so-and-so I immediately embarked on a quest to find albums I could read Asimov, Heinlein, and Moorcock, to. Of course there were a few attempts to write directly SF-inspired music. Who can forget The Carpenter’s Calling Occupants of Interplanetary Craft, which I have on my iPod running playlist at the very end? This is because it always inspires me with a last burst of speed so I don’t have to listen to too much of it.

Science Fiction Monthly helped out with an article on SF-inspired rock in one of its early issues, though in retrospect this was more of a trawl through the writers’ record collection. Jefferson Starship’s Blows Against the Empire left me cold. It just sounded like hippy folk rock and even now I have difficulty separating it in my head from Benson Arizona, the theme song to Dark Star. Pink Floyd’s Saucerful of Secrets was completely ruined by the Kazoo riff in Corporal Clegg despite the vaguely spacey noises in the rest of the album. Hawkwind, on the other hand, became one of my favourite bands of all time (though only up until their Moorcock-inspired album Warriors on the Edge of Time).  I was still several years away from appreciating just how much SF, and particularly New Wave SF, soaked through David Bowie’s work. 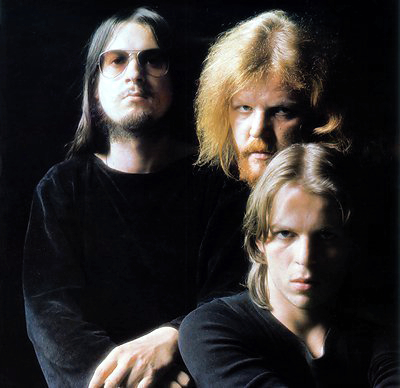 What the article didn’t really touch on was Progressive Rock, and particularly the soundscapes of Mike Oldfield, Yes and Tangerine Dream. I’ll talk about Oldfield another time, but it’s enough to say here that listening to Ommadawn for the first time was my Keats On looking into Chapman’s Homer moment.

This post is about Tangerine Dream, and in particular their album Phaedra which is perhaps their purest work. At this time the band consisted of Edgar Froese, Chris Frank and Peter Baumann. They produced soundscapes by programming enormous analog sequencers and oscillators. They found out that temperature changes caused the music itself to shift, producing what became a characteristic signature of their music.

Peter Baumann at the controls

You get the idea. Yet the music is genuinely hypnotic. Whether you have it on in the background when reading or not, it really does evoke alien, cosmic spaces. Of course the problem nowadays is that anyone with a £199 keyboard from Argos can create an entire Tangerine Dream album by pressing two buttons and leaving them on repeat for twenty minutes. Yet at the time Phaedra was released the musicians performed with temperamental machinery fifteen foot high and spent their time running back and forth between bakelite control panels like the desperate factory workers in Fritz Lang’s Metropolis.

The classic Tangerine Dream albums are, for me, Phaedra (1974), Rubycon (1975), Ricochet (a wonderfully dark live album from the same year),  Stratosfear (1976) and their magnificent live double-album Encore (1977). After that they changed direction, moving away from their abstract sweeping soundscapes to more easy-listening short-track electronic albums with (shock horror) singing. Listening to post Encore stuff is often painful, although to be fair they redeemed themselves with the wonderfully odd Madcap’s Flaming Duty (2007) which includes the German singer Chris Hausl singing the poetry of William Blake and mispronouncing half the words.

By modern standards, and compared to people like Blixa Bargeld and Alva Noto, Phaedra can sound a bit passé, but only because Tangerine Dream have influenced so many people since they started. I would recommend anyone to stick their headphones on, forget all bourgeois notions of melody and harmony, lie down under a starry sky, turn Phaedra up to 11 and let their brain gently sizzle away for forty minutes.