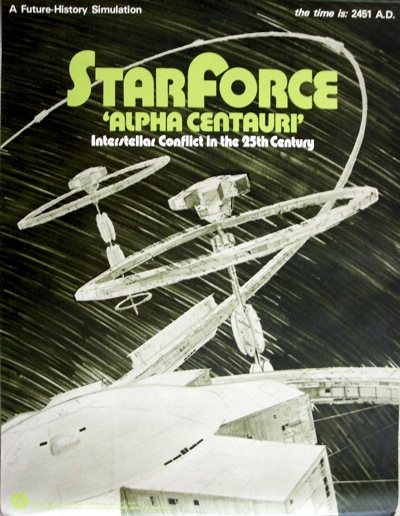 This post is a bit of unashamedly geeky nostalgia. As I’ve mentioned before, in the early 1970s I started collecting the science fiction magazines Galaxy and Worlds of If. Apart from the stories and articles what also fascinated me was the adverts. Flicking back through them now gives a fascinating insight into what people thought SF fans wanted to buy. Apart from the big glossy card inserts selling the healthy advantages of menthol cigarettes there are adverts for the Rosicrucians, futuristic crystal jewellery with LEDS in them (groovy) and head bands that tune your alpha waves to the cosmic vibe with the help of a couple of triple As.

One advert that fascinated me was this one, for the game StarForce – Alpha Centauri. Actually ‘game’ was a misnomer, this was a ‘simulation’ of interstellar struggle in the 25th century, published by the US company Simulations Publications, Incorporated (SPI). It seemed unbelievably cool, not least because the map looked like the control panel of a space ship. I desperately wanted to get my hands on a copy, but had no idea how to go about it. 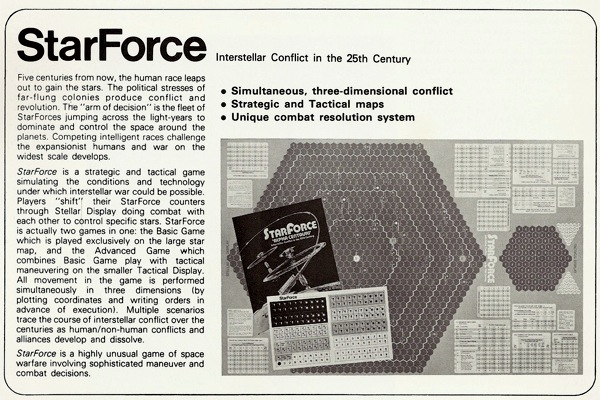 A bit of history is useful here. Science fiction and wargaming have always gone hand in hand (for boys anyway). The British science fiction author H. G. Wells published some of the first sets of rules for miniatures, Floor Games (1911) and Little Wars (1913) (the full title of the latter, rather charmingly, is Little Wars: a game for boys from twelve years of age to one hundred and fifty and for that more intelligent sort of girl who likes boys’ games and books.) In the UK we have a very strong tradition of miniatures gaming, where geeky boys and men in cardigans and pipes spend years of their life painting little lead men and then re-enacting battles on hugely impractical landscapes built in the loft or shed. In the US the military gaming hobby went down the boards and counters route, pioneered by Avalon Hill (AH) in 1954. This allowed for greater flexibility in simulating all sorts of combat, from ancient times to the far future. With counters and a board you could, for example, recreate Waterloo on a two foot by three foot map, instead of needing twenty four trestle tables and an aerodrome. By the early 1970s SPI was AH‘s biggest rival. Their games were cheaper, they had a larger catalogue and published a magazine, Strategy and Tactics, that carried a full game in every issue.

Therefore for a 13 year old boy in the UK in the early 1970s the word ‘game’ meant fighting over who got the boot in Monopoly or, for the more sophisticated, Chess. SPI‘s Starforce – Alpha Centauri was a window onto a whole new realm of sophistication, claiming to recreate the titanic intricacies of interstellar warfare. It just looked so complex and scientific. 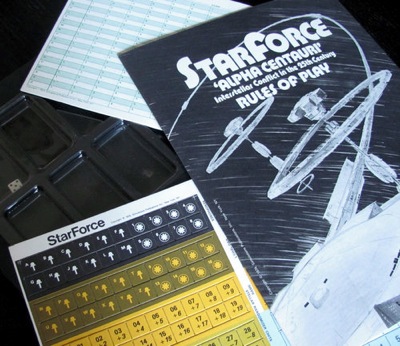 By coincidence I finally stumbled across a copy in a tiny shop run by a mad man in, of all places, Chapeltown, Leeds and promptly bought it. The next thing I had to do was wade through the 24-page rule book which was written in the most hideous legalese. For example – “[13.18] StarForces may never be plotted to a position with a MiniZulu greater than plus or minus five nor a hex number outside the “500” series.” It took a while but finally I got my head round the rules.

Now, StarForce was groundbreaking in many ways. It was the first ‘serious’ attempt to simulate the future, it used a 3 dimensional map (although the astronomically accurate star map is flat, each star has a + or – number next to it to show how far above or below the galactic plane it is) and it used simultaneous movement (you wrote your moves down and then revealed them at the same time as your opponent). Therein lay a problem because I was an only child living in the middle of the Yorkshire countryside. The nearest SF fan, to my knowledge, lived fifty miles away so I had to play the game with Mr Nobody. This made hidden movement a bit of a challenge, but I gamely soldiered on, losing to Mr Nobody with embarrassing regularity.

The game got around the issues of time dilation and faster than light travel by assuming that interstellar flight would be achieved through telekenesis. A StarForce is a cluster of four ships, each with a bunch of genetically enhanced telepaths holding hands in a circle and making the fleet jump around the map. Combat consisted of confusing the enemy’s telepaths by casting mind-frying fields in the right direction. Guessing where to send these, and where to jump your ships, formed the strategy and tactics of the game. In one sense it was highly abstract, and you needed a massive dose of imagination to give life to what could lapse into a fairly repetitive set of cat and mouse moves, a bit like chasing the king round an empty board in some chess endgames. Nevertheless I thought it was huge fun, and it remained one of my favourite games for a long time.

Computer games all but destroyed the board game market. SPI collapsed in 1982, partly due to mismanagement and partly due to the rise of the PC. Avalon Hill struggled gamely on until it was bought out by Hasbro in 1998. There are some very small companies still producing historical simulation games. Desktop publishing has made it cheaper and easier  for one or two-man outfits to produce short runs of titles with high production values (it took SPI years to afford three colour printing so that woods could be green instead of blue on their maps). There is also an increasing number of PC companies producing intelligent high end historical simulations (such as Paradox in Sweden), which allow you to recreate history without worrying about your armies going up the Hoover, for example.

It’s still possible to pick up copies of StarForce from places like eBay, and there are periodic attempts to kickstart a new edition. SPI also published two companion games, StarSoldier, which portrayed tactical man to man combat on alien worlds, and Outreach: The Conquest of the Galaxy, 3000AD – which upped the scale of the original to take in a significant chunk of the galaxy.

The New Romantic band The Human League (“Don’t you want me baby ?” etc.) took their name from one of the forces in the game.