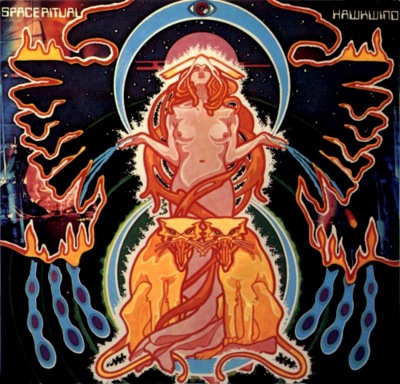 In the mid 1970s New English Library published the magazine Science Fiction Monthly, a huge format magazine which reprinted book covers by the likes of Chris Foss and Bruce Pennington for teenage boys to stick on their bedroom walls. Interspersed with these were short stories and articles, including one about science fiction in music. This was just before punk and the UK music scene was dominated by Glam Rock and the tag end of Progressive Rock, mixed up with some of the most horrendous rubbish that has ever been pressed to vinyl.

Out of all the various bands and singers who occasionally nodded in the direction of SF (David Bowie, Gong, Yes etc..) Hawkwindstood out as a band who, through their links with Michael Moorcock, deliberately set out to write music about their Acid-addled vision of a dystopian future. By this time the personal rot was well embedded and I was consuming anything to do with SF at a rate of knots. The article went on at great length about Hawkwind’s live album Space Ritual so I dutifully saved up the princely sum of £4.00 and toddled off to W.H. Smiths in Harrogate to buy the cassette.

Now up to this point my experience of modern music consisted of mainly Sérgio Mendes & Brasil 66, The Beatles and singing along with my dad to 8-Track cartridges of Sinatra on the way to school. I was too young to be into bands like The Who, and it would be another four years before my brain would be irrevocably fried by the sight of Kate Bush rising vertically out of a bank of mist to screech Wuthering Heights at the nation, and the sound of The Clash hammering out Tommy Gun.

So the first time I put Space Ritual on it seemed like the most unholy din, especially as it begins with what sounds like a cat being forced down a toilet. However, being a persistent little so-and-so, I kept playing it in the background until one day something clicked and I realised just how brilliant the album is.

Space Ritual is essentially one massive heavy metal jamming session combining guitar, drums, synthesizer, saxaphone etc and interspersed with short pieces of poetry describing the experiences of a spaceship crew flying through the universe in a state of suspended animation. I’d heard nothing like it then, and nothing like it since. To my unprofessional ears it sounds like the strangest combination of hard rock and jazz, lacking in all of the stupid posturing that characterises most heavy metal, and without a lot of the pretentious artiness that plagued other Progressive Rock bands like Yes and Genesis. It’s interesting to note that Punk bands like the Sex Pistols, who were openly contemptuous of prog rock, liked Hawkwind, probably for their raw energy and anarchic delivery.

I regret never seeing Space Ritual live. According to the BBC 4 documentary the band were out of their heads most of the time, which helped their music no end, and were often accompanied by the dancer Stacia who one night climbed on stage, took all her clothes off, added her own interpretation of the band’s lyrics to the show, and thereafter became a semi-permanent fixture.

Hawkwind produced two more studio albums: Hall of the Mountain Grill (1974) and Warrior of the Edge of Time (1975) (in which Michael Moorcock reads poetry based on his Eternal Champion novels). In 1975 Lemmy was kicked out because he was wrongly arrested by Canadian border police for drug offences. (a bit of a hypocritical move given that the rest of the band relied on Acid for much of their inspiration). The departure of Lemmy, who later formed Motorhead, was, in my opinion, a musical disaster. Everything after 1975 seems tame compared to the sheer free-form energy of Space Ritual.

I realise that this kind of music’s not to everyone’s taste but for me Space Ritual is one of the very rare albums I’ve never tired of, even after 36 years.