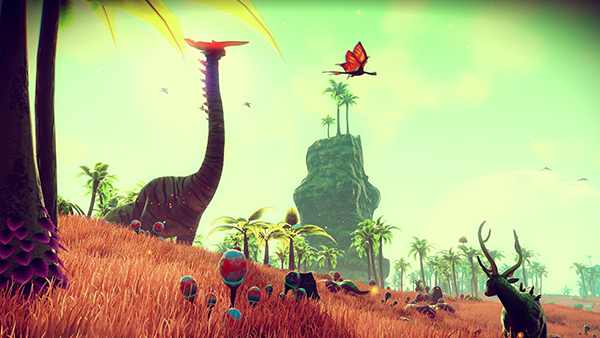 I guess, like many, I fell in love with the visual style of No Man’s Sky. The screenshots posted in the build up to its release looked like the covers of 1960s science fiction magazines – Galaxy, If and Worlds of Tomorrow. That, plus the promise of a vast galaxy of procedurally-generated unique planets, many with their own strange creatures to discover, had me downloading the game on the day it came out. Four weeks later I asked for my money back, which is something I’ve never done before. Usually if I buy a game that turns out to be disappointing I put it down to experience and move on, but like so many of the people let down by Sony and Hello Games, this felt like it went beyond the usual expectation vs reality, and not just because of the £39.99 price tag. The gap between what appeared on the promo video and the actual gameplay was so vast that it was hard not to feel cheated.

The disaster it’s turned out to be (the game lost 88% of its players in the first week) has been minutely analysed from a gaming point of view, but what about from a science fiction fan’s angle? Was it fair to be feel so let down by No Man’s Sky? I think there’s a more important question to be asked – can games ever recreate the experiences we construct in our imagination when we read SF or Space Opera, even if the technology is now able to handle settings as big as a galaxy? I’m talking here about first person pilot games – where you fly a ship through space encountering aliens and exploring worlds as well as taking part in trade and battles. There’s a another genre of Galactic Empire games where you manage an interstellar civilisation as it expands across the stars (Paradox’s Stellaris is one of the latest entries to this group). They, on the whole, have been more successful than the first category. I’m also not talking about story-driven SF role playing games like Mass Effect. No Man’s Sky was intended to be a sandbox exploration game, where you built your own stories out of the rich and random encounters you were supposed to have.

For me the acid test was always going to be the original Elite, which came out in 1984. I played it on a BBC B 32K  with an old mini 1950s black and white TV for a monitor. The picture kept going (usually during battles or when I was about to dock) so I had to thump it hard to kick the valves back into  life. The game was as rich and varied as you’d expect for something crammed into about 16K of machine code – one of the most impressive features was hidden line removal so the spaceships looked like solid objects instead of wire-frames – but what the game lacked was supplied by your imagination, and this is probably where modern games stumble.

In a world used to high-end 3d realism gamers are more used to having the work done for them. The mind could populate the line-drawn ball representing a planet in 1984 Elite with all manner of wonders. In No Man’s Sky players were led to expect to see that same richness procedurally generated by the game itself, and of course it didn’t happen. Fantasy role playing games have it a lot easier – one world or continent, usually with a fairly unsophisticated political, economic and social background, and a handful of monsters and creature races. To create the sheer scope and majesty of, say, Iain Banks’ Culture, or even the Star Trek universe, you’ve got to create world upon world, galaxy-spanning empires and federations, believable astronomy etc. etc., and that is still way beyond the coding capabilities of programmers, and the imagination and creativity of those responsible for designing the experience.

As well as No Man’s Sky I’ve played Eve Online, and the latest version of Elite – Elite Dangerous:Horizons, both massively multiplayer online roleplaying games (or MMORPGs) (you can play Elite solo offline). Eve is generally regarded as one of the best MMORPGs around but it’s scary and confusing as hell. It’s set in an immense galaxy full of rival corporations and federations and for a single player it is daunting to say the least. Despite trying a couple of times it hasn’t hooked me, for the following reasons.

Elite Dangerous: Horizons has clearly set itself up as a rival to Eve, while aiming to recapture the feel of the very first version. It’s first person – you sit in the cabin of your ship – and the interior is instantly recognisable to those who played all those years ago. It therefore has a more immediately visceral feel (there’s a VR option which is very tempting) – and now they’ve added the ability to land on, and trundle round, planets, although the planets themselves at the moment are more or less procedurally generated balls of rock. The other factor that makes Elite Dangerous more compelling is the fact that they’ve modelled our own galaxy on, it’s claimed, a 1:1 scale – although there’s no time dilation effects caused by the distances. So when I look on my map I can see Procyon, Sol and Epsilon Eridani etc, and know that if I survive I can finally reach them and have a look around (you start in a randomly assigned system).

So with Elite Dangerous I’ve found enough familiarity and detail, but also enough blank canvas, to layer my own imagination onto my adventures. But Elite, Eve and No Man’s Sky have all thrown up one of the fundamental issues with galaxy-spanning role playing games – space can be very repetitive and dull. In Eve Dangerous you spend hours flying between systems that are more or less the same, and then once in a while a series of events will throw you into a dangerous, rapidly evolving and unique scenario that gets your heart racing. Imagine a screen saver that occasionally chucks action sequences from Battlestar Galactica in your face. With Elite Dangerous there’s enough of a balance between the two to keep me engaged – so far. No Man’s Sky suffered from trying to do too much and what looks like downright bait and switch. Eve Online often feels like spreadsheet gaming with the occasional jaw-dropping scene to screen-capture. I’d be very interested to hear from people who can recommend other space role-playing sandbox games.