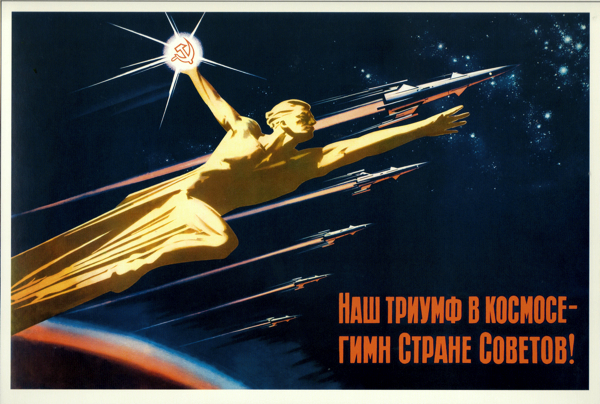 Our triumph in Space is a hymn to the Soviet nation!

Last week I was working in Russia. I attended a conference in Tver, halfway between Moscow and St Petersburg where I was set on fire. I was also asked to be one of the judges for a final graduation film for one of the students at the All Russian Cinematography University (VGIK for short). As a thank-you present I received a set of 25 posters from the Soviet space race, mostly dated from the early 1960s. Funnily enough on the plane there and back I watched the movie Gagarin: First in Space, a Russian biopic of the first spaceman released in 2013. It’s a fascinating yet oddly unsatisfying movie, largely because its an unashamedly hagiographic portrait of the man. Others have commented that it feels like a Soviet Realist propaganda film of the era, where the bold Cosmonauts can do no wrong in their dedication to the cause. Gagarin, who in real life was clearly a complex man frustrated by the fact he wasn’t allowed anywhere near a rocket after his one flight, comes across as so too good to be true you want to punch him. It’s not The Right Stuff, and lacks all that movie’s acerbic portrayal of inter-astronaut rivalry, political shenanigans and down-right ludicrous training scenes (which it clearly tries to copy). It also suffers from Realistic Space Movie syndrome, whereby crises tend to be involve people shouting things like ‘There’s no signal from KP-3’ at which point everyone goes white as a sheet and runs round panicking and pointing at ticker tapes until someone says, ‘There is a signal from KP-3’, everyone breaks down into tears of relief and the audience go ‘Huh?’. 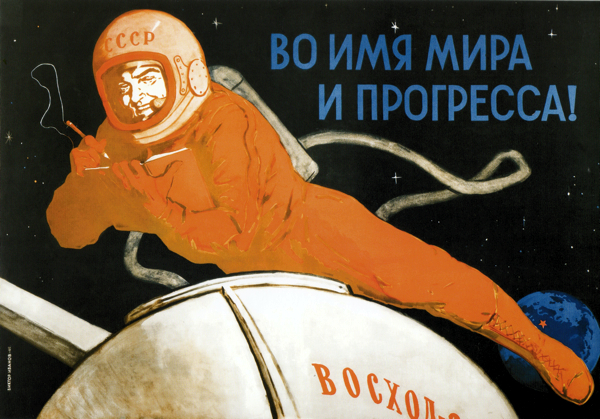 In the name of peace and progress!

Having said that, overall it’s a great slice of Soviet space history with some very cool effects showing the Vostok I capsule whizzing over the earth. It also shows two things that were never mentioned at the time. Firstly Gagarin’s capsule didn’t separate properly before re-entry and they had to rely on atmospheric friction burning off the back half of module before the whole assembly destabilised. Secondly Gagarin ejected from the capsule before it hit the ground. This was planned all along but hushed up because for the flight to be recognised as a proper space flight the astronaut was supposed to accompany the vehicle from point of take off to point of landing.

Anyway – film aside, the posters, produced in the set Space Will Be Ours! by Kontakt Publishers of  Moscow are a wonderful record of the optimism and enthusiasm of the space age seen from the Soviet perspective. I’ve chosen my favourites and here they are for you to enjoy: 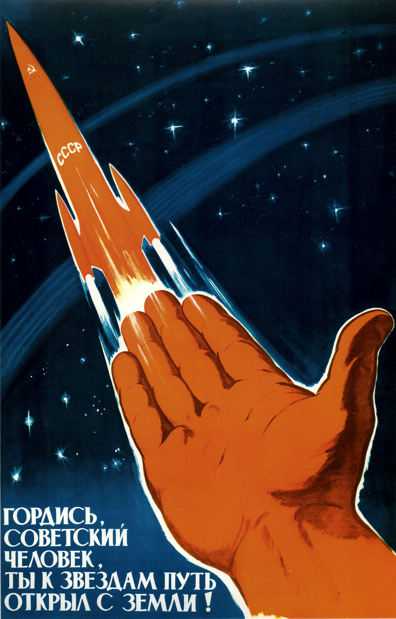 Soviet citizen be proud! The way to the distant stars has been discovered! 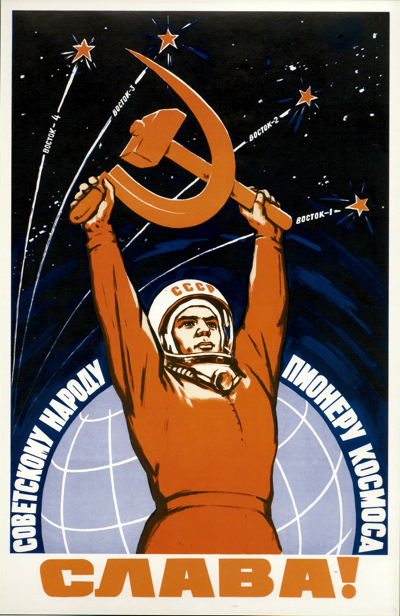 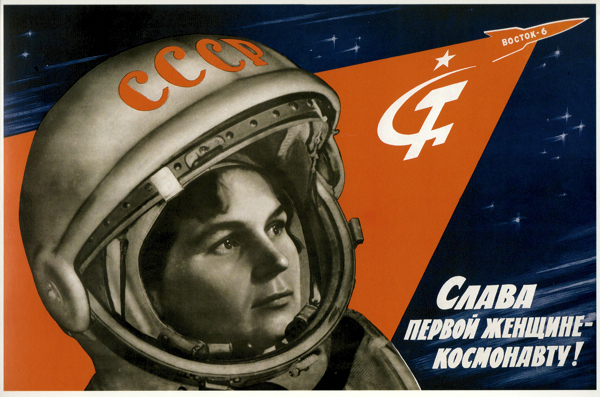 We are born to make dreams come true! 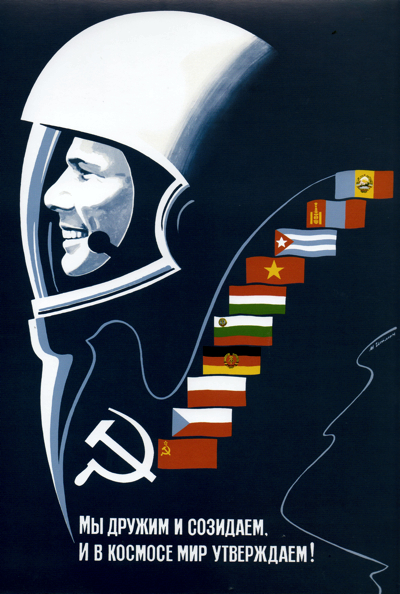 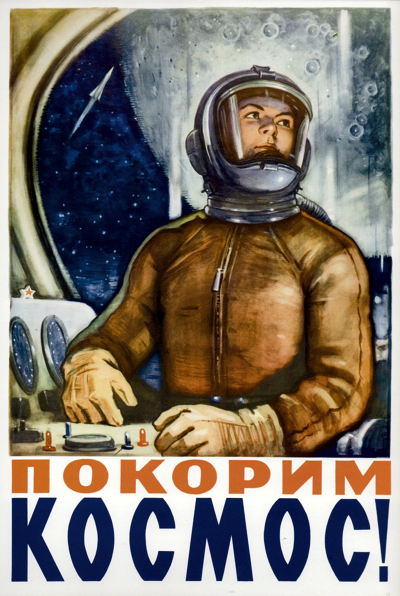 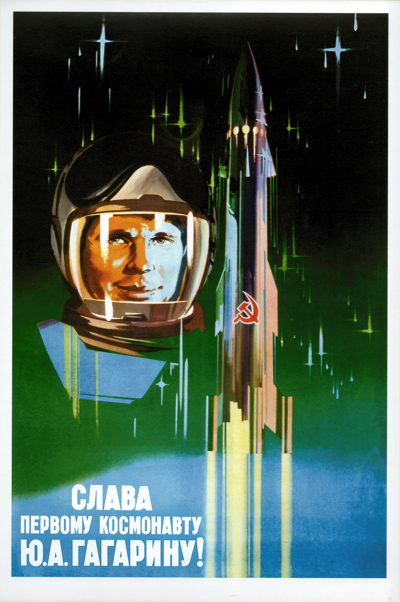 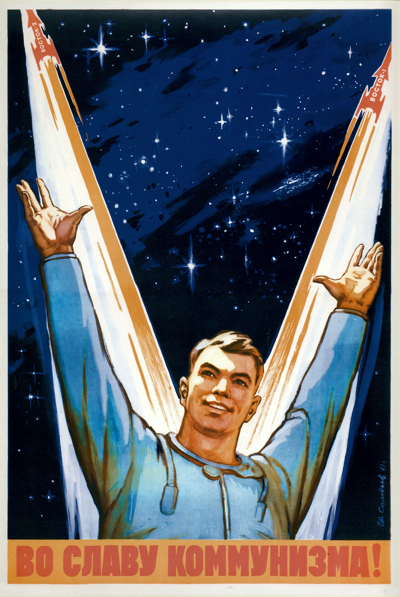 For the glory of Communism! 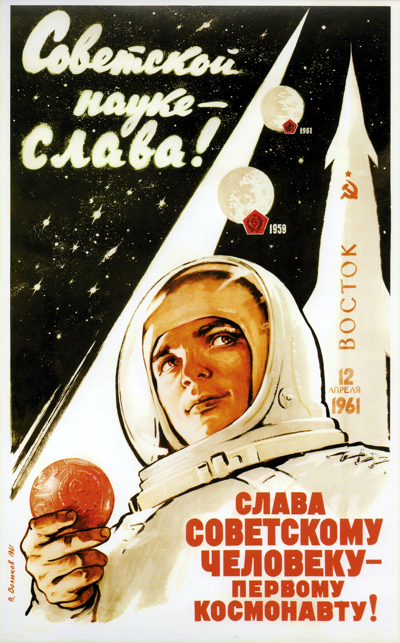 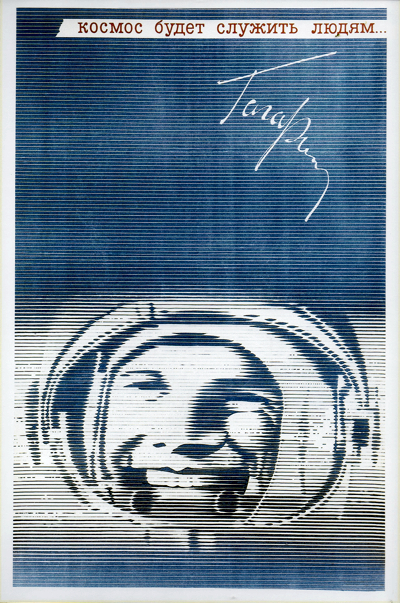 Space is going to serve the people! 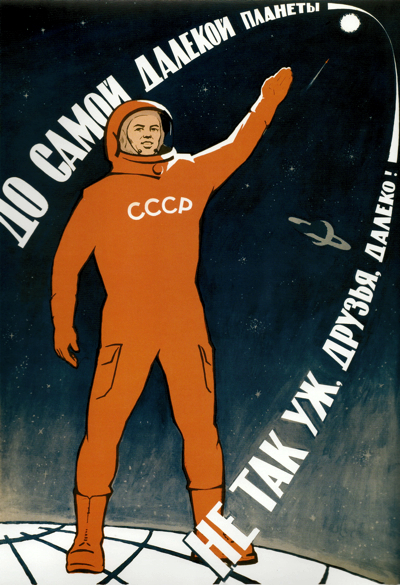 The distance to the furthest planet is not that far!

We’ll pave the way to distant worlds, and solve the mysteries of the Universe!