Sin City 2: A Dame to Kill For 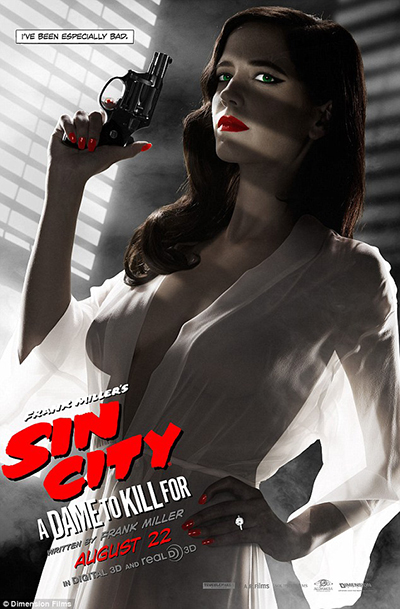 Last night I went to a Sin City double feature where I watched the original followed by the sequel in 3D. Very entertaining and well made, the 3d enhances the unique visual style of the original and yet, and yet… My biggest feeling after seeing the movies, and 300 as well (I haven’t seen 300: Rise of an Empire, but can’t wait after reading this wonderful review) is that of colossally wasted opportunities. Brilliant visuals and great actors are completely thrown away on shallow, ugly-minded content.

The Sin City movies are based on the comics by Frank Miller, a series of hard-boiled cinema-noir tales rendered in striking monochrome. Ground-breaking when they first came out, they followed the interwoven stories of a set of fantastically realised characters including Marv the lunky thug who Miller described as ‘Conan in a trenchcoat’ (Mickey Rourke in the movies), the tormented con trying to go straight Dwight McCarthy (Clive Owen in Sin City, Josh Brolin in Sin City 2) and exotic dancer  Nancy Callahan (based on screen time, played largely by Jessica Alba’s bum in both movies). The films cleverly maintain the intricacies of the comics by weaving together a handful of linked tales in each. Of all the main characters the one you end up gunning for the most is Marv, largely because he’s refreshingly untainted by the self-absorbed wee-small-hours-in-the-morning soul-searching of everyone else and is often downright funny – humour or any sense of irony is in woefully short supply in Frank Miller’s movies.

The most impressive thing about the films is the visual look and feel. Partly taken from the comics themselves, partly channelling the hard-boiled detective films of the 1940s with a massive dose of German Expressionism thrown in, almost every shot is fantastically composed and lit in dramatic monochrome. As a stroke of genius, the comic’s use of spot colour is replicated – a woman’s red dress, eyes glowing green etc. Rendering blood in white most of the time or, in one case, bright yellow, allows for lots of gore without the screen being filled incessantly with red (though in the second film blood reverts to its natural colour more often than not). Clever little touches include rendering props in white outline to add to the comic-book feel. This is particularly well done with glasses, dehumanising the characters at the point when their passions turn them into (usually) raging killing machines. The films back to back add up to a triumph of design and composition that still takes your breath away even after four hours and both films. Little Miho’s attack on the Roark Mansion at the end of Sin City 2 is particularly impressive, even in its silliest moments.

The problem with the Sin City movies, and 300, lies in the script. Part of the issue is that a certain type of comic dialogue doesn’t translate into film. Miller’s writing is an odd mix of film-noir internal monologue and the kind of portentous exchanges that used to dog Marvel Comics in the 1970s, where characters just made grandiose pronouncements at each other, instead of having conversations (“Now you two will be next to freeze and burn in the grip of Equinox the Thermodynamic Man!”). As every tale is ultimately one of vengeance against an utter, unredeemable villain set in the run-down foulness of Sin City’s slums then all the internal monologues follow the same pattern – a) Struggling to keep a grip/go straight, b) Her beauty hooked me in c) They beat me up d) We killed everyone in a murderous yet satisfying rage – rinse and repeat. Compared to the wit and intelligence of Howard Hawk’s The Big Sleep or The Maltese Falcon, whose wise-cracking scripts the movies are clearly referencing, this is like being hit over the head repeatedly with the sledgehammer used on Marv during one interrogation scene. On top of this the relentless violence and misogyny are extremely wearing. There’s been an interesting debate going on over here in Jane Dougherty’s blog about what makes a true ‘kick-ass heroine’. In Sin City it’s clear – prostitutes in thongs and fishnets with their tits hanging out and a machine gun in each hand. It’s essentially Chicks with Guns (I refuse to add a link, you can look it up yourself) meets the South Park episode Major Boobage – a 14-year old boy’s idea of what a ‘strong woman’ should be. 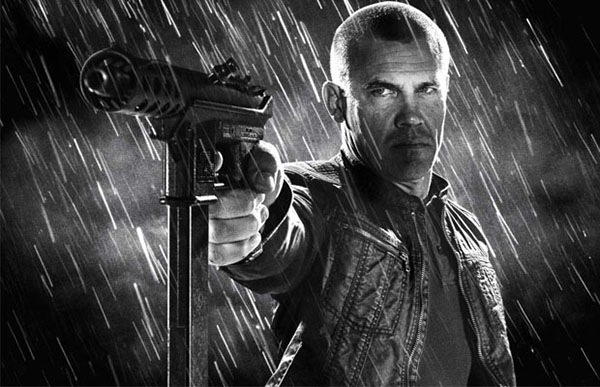 Enough has been written on Frank Miller’s politics so I won’t re-tread old ground here. 300 nailed his beliefs to the mast in lurid primary colours when it recast the brutal and cruel slave-based Spartan state as champions  of some warped Tea-Party view of the American Constitution, as did his comments on the Occupy Movement. His comics are clearly capable of ground-breaking design and intelligence, yet none of that comes through in the films which end up being sub-Tarantino grindcore without any humour or wit. What I’d really like to see, for example, is the same stunning 300 bravura style being applied to the Oresteia of Aeschylus – that would be something worth seeing – or a Sin City with a script that captured all the smartness and sophistication of a Bogart/Bacall movie. At the moment all we seem to have is a tedious parade of boobs, bums and blood narrated by a crowd of self-absorbed bores. Except Marv. Marv is cool – he should have his own TV series.

One response to “Sin City 2: A Dame to Kill For”