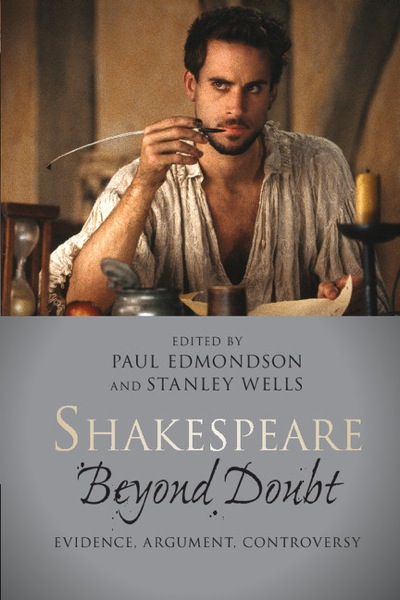 I’ve just finished reading the collection of essays Shakespeare Beyond Doubt, edited by Paul Edmondson and Stanley Wells. The book is designed to counter the increasing number of what it politely refers to as ‘anti-Stratfordians’ – those who believe that Shakespeare wasn’t the author of the plays attributed to him. A couple of years ago James Shapiro wrote Contested Will, a history of the Shakespeare deniers from Delia Bacon and her hunch that the real author was Francis Bacon (there’s a surprise), through the appositely named John Looney to people like Derek Jacobi, who really should know better. This new book is a more academic refutation of the varied conspiracy theories out there, linked to explanations of how a dramatist like Shakespeare would have actually crafted his plays, and explanations as to why the Shakespeare deniers exist. The tone of the book is that of a group of baffled professors peering out of the literature faculty window at a bunch of nutters jumping up and down waving banners and shouting in the car park. While the essays are short, they are carefully rigorous and at times a little bit laboured.  My experience is that conspiracy theorists tend not to respond to the subtle investigation of evidence as their own beliefs paint over reality in broad lurid colours. Having said that this collection does a very comprehensive job of exposing the fallacies behind their ideas. The key points are summarised below, please feel free to print off and keep in your back pocket in case you meet a wild-eyed Baconite or Oxfordian at a party:

1) Shakespeare-deniers believe in the Romantic notion that an author can only write about what he or she knows (their theories date from the mid-Victorian era, no-one before that questioned the authorship of the plays). Shakespeare’s plays talk about kings and queens, and foreign lands. Therefore only someone posh and widely travelled could have written the plays. This is bollocks. As far as I know Kim Stanley Robinson has never been to Mars and George R. R. Martin has never visited Westeros, yet they have managed to do a perfectly good job of describing both. Assume that writers can only describe what they themselves have experienced and in one fell swoop you have wiped out Science Fiction and Fantasy.

2) There is hardly any evidence of Shakespeare’s life. Huge gaps exist in the timeline. Well, you can say this about all his contemporaries. We know more about Shakespeare than Christopher Marlowe or John Fletcher, and no-one doubts the authorship of their plays. In this period in history people didn’t write down the day to day ephemera of people’s lives, they didn’t think it important. It’s only with the rise of journalism and the novel at the end of the 17th century that people’s lives become serious objects of interest. Having said that Stanley Wells painstakingly lists all the references to ‘Will Shakspear Wot Wrote Thyse Playes’ and there are loads.

3) Shakespeare-deniers misunderstand the way in which plays were written in this period. They subscribe to the Romantic notion of a single author in a garret penning Great Works and then handing them over to the actors (as in Shakespeare in Love or that steaming heap of dung Anonymous). This, again, is nonsense. Plays were written collaboratively by teams, often including the actors themselves. Shakespeare worked with others on many plays, and we can see the hand of Christopher Marlowe and John Fletcher in plays like Timon of Athens and Macbeth, to take two examples. The best analogy is of a team of script writers working on a film or TV series. Shakespeare, Marlowe and an actor (for example, Will Kemp) would get together down the tavern and thrash out a scene, testing lines of verse, entrances and exits, working out blocking with coins on the tavern table. They might say to Shakespeare ‘I need a stonking good speech for my entrance in Act III but make it short because I’ll be knackered after the duel’ and Will would sit in a corner and come up with something, but the idea that Shakespeare sat in a room on his own or under a tree penning Great Art is a Victorian fantasy.

4) Conspiracy theorists love a conspiracy, and each one tries to out-do the others with their own pet theories. Hence there are now about 80 contenders for the ‘real author’ of the plays, including Queen Elizabeth herself. The law of diminishing returns kicks in here, because every new addition to the cast list undermines the case for all the others. It reminds me of the wonderful comment by a Beefeater Tour Guide at the Tower of London – ‘If you think you are Anne Boleyn reincarnated you are certifiably insane, I meet four of you every year and you can’t all be right.’

The last point throws an interesting light on conspiracy theorists in general. I’ve met enough Shakespeare-deniers and Moon-hoax advocates to spot a constant note of underlying smug triumphalism – along the lines of ‘I know the real truth, unlike you deluded saps’. Latching onto a wild-eyed theory that flies into the face of established knowledge has the dual effect of making you feel smarter than the unenlightened and somehow a rebel. The rise of the internet has given amateur ‘scholars’ a free platform for all sorts of theories without the inconvenience of careful peer review. Conspiracy theories are also sexier and more mysterious than reality. We have yet to see a decent film of Shakespeare’s life with the same apparent high-mindedness and production values of Anonymous.

Shakespeare Beyond Doubt is a great collection of essays, and a small calm voice of reason amid the shouty nonsense. I doubt most Shakespeare-deniers will read it though. In the end I always think that the best response to conspiracy theorists is that of Buzz Aldrin when challenged by Moon-Hoax advocate Bart Sibrel.

12 responses to “Shakespeare Beyond Doubt”