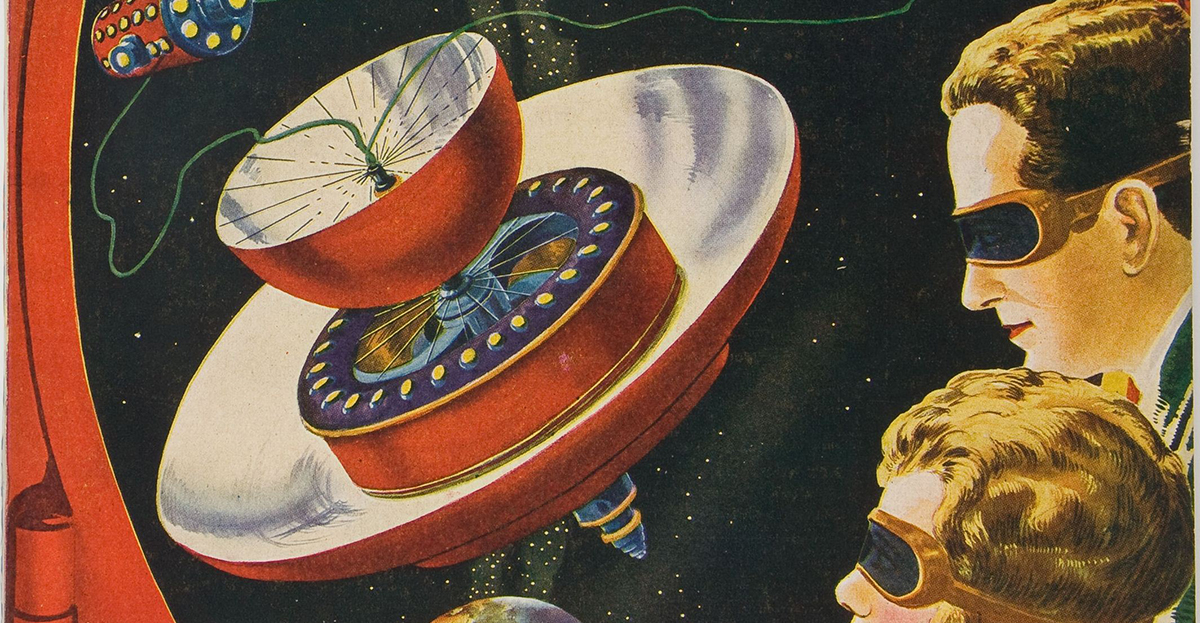 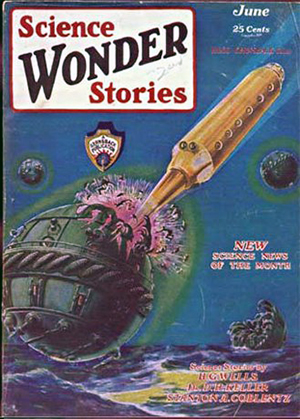 The first science fiction magazine, Amazing Stories, is forever linked to Hugo Gernsback. In reality he was only in charge for three years. By April 1929 the Experimenter Publishing Company was bankrupt and Gernsback sold all his titles, including Amazing. Yet two months later he bounced back with three new magazines – Science Wonder Stories, Air Wonder Stories and Science Wonder Quarterly. This gave him the opportunity to nail his colours to the mast and, more or less, claim Science Fiction for his own (including the new genre name which replaced the clumsier Scientifiction).

I thought it would be interesting to publish his editorial from that very first issue, not only because it reveals the man’s thinking, but also because it shows how close American SF was linked to notions of self-betterment through scientific progress, and Gernsback’s vision of the genre as essentially an educational motivator designed to stir up ordinary people’s passion for science. Ninety years later his idea, and much of the SF of the period, appears naive and one-dimensional, and a far cry from the rich and complex literature loosely collected under the name Science Fiction. But working as an education consultant talking to ministers from all over the world who struggle to get their kids to take the slightest interest in science, I think that there’s still an important role for SF in giving people that sense of wonder that may drive them to engage a little more thoughtfully with science and technology.

Anyway – here’s the Science Wonder Stories manifesto from the very first issue in the words of the man himself: 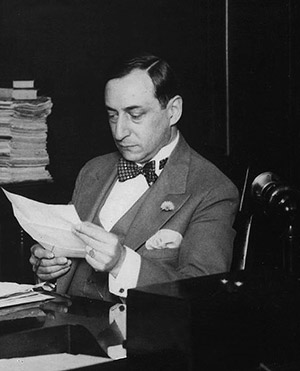 Taste in reading matter changes with each generation. What was acceptable to your grandparents was hopelessly out of style for your parents. The literature of your parents – the Laura Jean Libby type of story and the dime novels, Buffalo Bill and Deadwood Dick are laughed at by the present generation.

The past decade has seen the rise of “sexy” literature, of the self confession type as well as the avalanche of modern detective stories.

But they are transient things, founded on the whims of the moment. For the world moves swiftly these days and with it moves literature also.

Science-Mechanics-the Technical Arts – they surround us on every hand, nay, enter deeply into our very lives. The telephone, radio, talking motion pictures, television, X-Rays, Radium, super-aircraft and dozens of others claim our constant attention. We live and breathe day to day in a Science saturated atmosphere.

The wonders of modern science no longer amaze us – we accept each new discovery as a matter of course. We even question why it had not come about sooner. 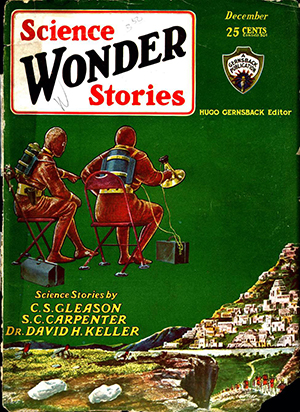 The man in the street no longer recognizes in science the word impossible; “What man wills, man can do,” is his belief.

Interplanetarian trips, space flyers, talking to Mars, transplanting heads of humans, death-rays, gravity-nullifiers, transmutation of elements – why not? If not today, well, then, tomorrow. Are they surprises? Not to him; the modern man expects them.

No wonder, then, that anybody who has any imagination at all clamors for fiction of the Jules Verne and H. G. Wells type, made immortal by them; the story that has a scientific background, and is read by an ever growing multitude of intelligent people.

SCIENCE WONDER STORIES supplies this need for scientific fiction and supplies it better than any other magazine.

I started the movement of science fiction in America in 1908 through my first magazine “MODERN ELECTRICS.” At that time it was an experiment. Science fiction authors were scarce. There were not a dozen worth mentioning in the entire world.

I wrote a number of such stories and novels myself and gradually grouped about me a circle of authors who turned out better and better work as the years went by. I still have the best of these authors with me and practically all of them are writing and will continue to write for this magazine. 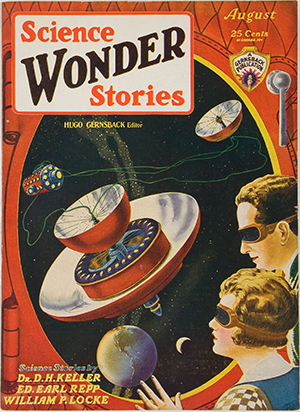 Who are the readers of SCIENCE WONDER STORIES? Everbody. Bankers, ministers, students, housewives, bricklayers, postal clerks, farmers, mechanics, dentists – every class you can think of –  but only those who have imagination. And as a rule, only those with intelligence and curiosity.

When the idea of the new magazine first formulated itself, naturally the name was of importance, and I put that into the hands of the future readers. The publishers had no hand in it.

Many thousands of prospective readers were circularized by means of a single letter. They were asked to subscribe to a new and unknown, as well as un-named magazine. The result was truly amazing. I never experienced the like in my twenty-five years of publishing experience.

And as the result of the popular vote, SCIENCE WONDER STORIES is the name of the new magazine. I asked for a vote, too, for the TYPE of story wanted most. And the type that carried the majority of votes I herewith pledge myself to publish.

The new readers voted for other things too, most notable for “Science News of the Month” – a few pages of short paragraphs giving the latest scientific achievements of the entire world written in plain English, so that “he, who runs, may read and profit.” That department begins in this issue. 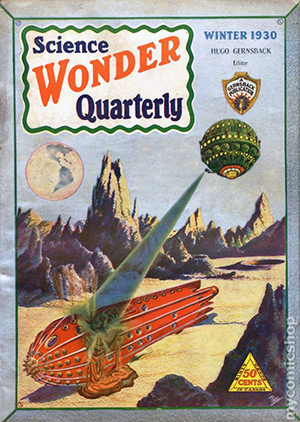 Science fiction, as published in SCIENCE WONDER STORIES, is a tremendous new force in America. They are the stories that are discussed by inventors, by scientists, and in the classroom. Teachers insist that pupils read them, because they widen  the young man’s horizon as nothing else can. Wise parents, too, let their children read this type of story, because they know it keeps them abreast of the times, educates them and supplants the vicious and debasing sex story.

SCIENCE WONDER STORIES are clean. CLEAN from beginning to end. They stimulate only one thing – IMAGINATION. Where is the reader who can remain phelgmatic  when you take him to distant planets, into the far flung future 10,000 years hence, or on a trip into the fourth dimension?

No wonder these readers or fans, if you please, look upon science fiction with a sort of reverence.

I consider it a particularly fortunate occasion to welcome to our editorial and advisory board, an imposing array of scientific authorities and educators.

It has long been my feeling that having an authority in the various sciences who would pass upon the scientific correctness if such stories, would be of the greatest aid in mapping the future course of science fiction. 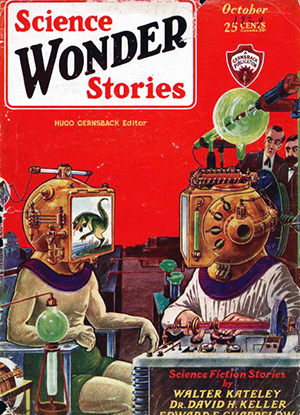 There has been altogether too much pseudo-science fiction of a questionable quality in the past.  Over-enthusiastic authors with little scientific training have rushed into print and unconsciously misled the reader by the distortion of scientific facts to achieve results that are clearly impossible.

It is the policy of SCIENCE WONDER STORIES to publish only such stories that have their basis in scientific laws as we know them, or in the logical deduction of new laws from what we know. And that is the reason why ALL stories published in this magazine must pass muster before an authority. It is a guarantee to our readers that they will not get a false scientific education thru the perusal of these stories.

I believe that this innovation will make new history in magazine publishing. I know of no other fiction magazine that can muster such an array of authorities and educators to pass upon the quality of its stories.

It augurs well for the future of science fiction in America.