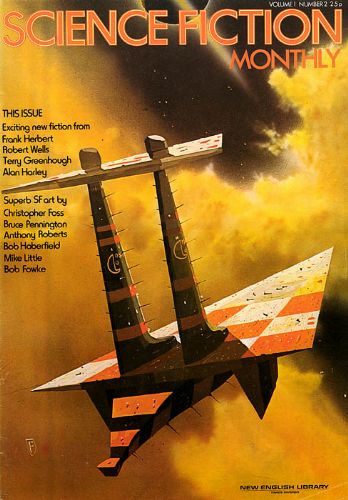 I’ve chosen the second issue of the 70s British SF magazine Science Fiction Monthly because that’s the one that started it all off for me in 1974. I was on holiday in Filey with my parents, on the North Yorkshire coast. There’s a great song by Morrisey called ‘Every day is like Sunday’, which pretty well sums up off-season destinations like this, especially for 13 year boys on vacation with their parents. There was the grey beach and Jimmy Corrigan’s Amusement Arcade, and that was it.

Science Fiction Monthly No. 2 was in a newsagents on the Promenade and it stuck out like a sore thumb. It was a bright mustard yellow with a thunderingly huge Chris Foss spaceship on the cover. It spoke of distant, wondrous realms and other worlds about as far removed as you could get from a rainy day in Filey. So instead of pushing 25p into the Penny Falls, I handed it over and walked off with the magazine. It was one of those epiphany’s that James Joyce writes about, marking a rite of passage from the world of Marvel Comics and plastic model kits into a very strange adulthood.

Science Fiction Monthly was published by New English Library, a spin-off from New American Library. They produced cheap paperback series about Hells Angels and Skinheads (and, to ensure completeness in their catalogue of hair length, Suedeheads), Horror, Westerns and Science Fiction and Fantasy. Most of their catalogue was hack work sex and violence for teenagers, apart from the SF  line-up which included works by (among others) A.E. Van Vogt, Asimov and Frank Herbert. I’ve already written about one of their main artists, Bruce Pennington, who featured in issue 1 of the mag. NEL hit on the idea of printing the artwork from their books in a bedsheet format magazine (the same size as a newspaper like The Times) so teenage boys could pull it apart and stick the pictures on their walls. Not wanting to do that, I obsessively kept mine pristine and flat in my sock drawer. As a result I have that issue and the 27 others next to me on my study desk in great big Potassium Permanganate coloured binders.

As a science fiction magazine SFM wasn’t so great, but it was the only one on offer in 70s Britain. The editors didn’t have much of a clue about the genre and the magazine catered neither for teenage boys (too many words) or science fiction fans, who sneered at its often juvenile contents (Vol 2 saw the advent of one of the most godawful comic strips ever drawn, The Size of Things to Come, which is best described as the Eye of Argon in lurid crayon). To be fair SFM was following in the wake of New Worlds, a sophisticated, ground-breaking magazine that was the focus for the New Wave movement and published experimental works of genius by J. G. Ballard and Michael Moorcock (among others). In comparison SFM was a bit of a mess.

So what’s in issue 2? Well, it’s pretty representative of the magazine as a whole. Apart from a poem by John Brunner, and an extract from Frank Herbert’s The Godmakers  (which NEL had just released) the stories are forgettable. The artist feature looks at Chris Foss, and his jaw-dropping paintings are scattered throughout the magazine. The article on Science Fiction cinema is interesting for the films it holds up as representative of the best in the genre. It’s hard to remember the celluloid wilderness before Star Wars and Alien made the studios realise they could make money out of the future. The three films covered in the article are Westworld, the embarrasing The Final Programme, and Tarkovksy’s Solaris. Later on the magazine would do a feature on that famous Science Fiction film director Jack Arnold (yes, I know, if you’re scratching your head, think Tarantula and The Incredible Shrinking Man). Issue 2 also mentioned fanzines, prompting me to start my own. I cadged an original short story from the writer Brain Stableford for the inaugural copy of Procyon, and duly illustrated it in crayon and felt pen. There was also an advert for the Leeds bookshop Books, which had a massive SF collection on the first floor. What it didn’t say was that it shared the room with a huge collection of 1970s Danish porn, and the guy who ran the shop looked like the mad brother of the one with the eyepatch out of Dr Hook.

Science Fiction Monthly carried on for 28 issues. As circulation dropped and money grew tight the editors hit on the brilliant idea of running art competitions, which kept them stocked with free paintings to put on the pages when they could no longer afford to fill the magazine with commercial work. The second editor, Julie Davis, had a slightly better understanding of SF and towards the end the quality of the writing picked up. High spots included the serialisation of Mike Ashley’s History of the Science Fiction Magazine and the article on SF in Rock that introduced me to Hawkwind and Space Ritual. The magazine folded in 1976, to be replaced by one issue of a magazine called SF Digest. This kept the mediocre writing and none of the big cool posters. They probably sold about three copies.

And that was that until the supremely weird Vortex arrived on the scene in 1977 (I’ll talk about Vortex at a later date), followed by Penthouse’s Omni (less interesting than Penthouse). For a few months our newsagents in Bishop Monkton (population 1300) took it upon himself to stock the American edition of Analog between Farmers Weekly and The Dalesman, until he tragically saw sense and stopped. It wasn’t until I went to university that I got access to SF magazines again, and started subscribing to the wonderful Magazine of Fantasy and Science Fiction.

As an after note, NEL brought out a single issue of a magazine called Edgar Rice Burroughs in the same format as SFM. I probably did buy the only copy, but it was worth it for the huge reproductions of Bruce Pennington’s covers for NEL’s editions of his Mars and Venus series.