Road to the Stars 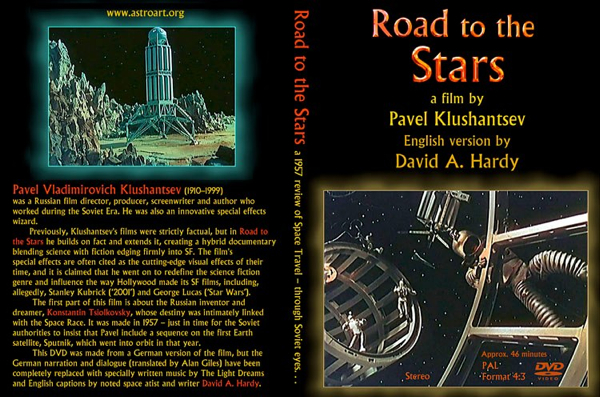 The British Space artist David A. Hardy has just re-released, on DVD, the rare Soviet 1957 film Road to the Stars, directed by Pavel Klushantsev. It’s available from his website, The Astroart of David Hardy for £9.50. The documentary begins with the work of the Russian scientist Konstantin Tsiolovsky, credited as the Russian father of rocketry, who proposed that orbital velocity could be achieved through the development of multi-stage rockets. In the second half it shows a 1950s Soviet vision of the future including life aboard a Space Station and a manned landing on the moon.

This version is taken from a German print of the film. David Hardy has removed the narration and replaced it with subtitles. He’s also added a soundtrack by The Light Dreams. Personally I’d have preferred something by these guys, who I saw in performance as a kid many years ago, but you can always turn down the ambient electronic score and stick on your own copy of The Orthodox Singers: Basso Profundo, who are just as wonderful, and a bit more in keeping with the spirit of the film.

It’s a great documentary. One thing that is striking is the undercurrent of Russian Romanticism that runs through the movie. This first comes out in the portrayal of Tsiolkovsky. Russia has a long tradition of the itinerant wise man, and the literature and culture of the country is shot through with images of saintly yet profound thinkers, often in traditional Russian clothes, sitting in their dachas far away from the corruption of city life and thinking Great Thoughts. Leo Tolstoy (who was a contemporary of Tsiolkovksy) is perhaps the most famous example when, in later life, he formulated his own version of anarchism. In Road to the Stars the father of rocketry is portrayed in a similar way, musing in a cabin in the woods, not tinkering with big machines in a lab, which is how we usually think of space scientists. Similarly the first astronauts and the guys involved in the moon landing seem quite emotionally engaged with their experiences, waving their arms about and oohing and aahing as they step off the ladder, or float weightless in their cabin for the first time. It reminds me of one of the Russian scientists who worked on the Lunokhod Rover who said, in an interview for the BBC series The Planets, that he wanted the buggy to ‘die in beauty’ when it finally stopped working on the moon. 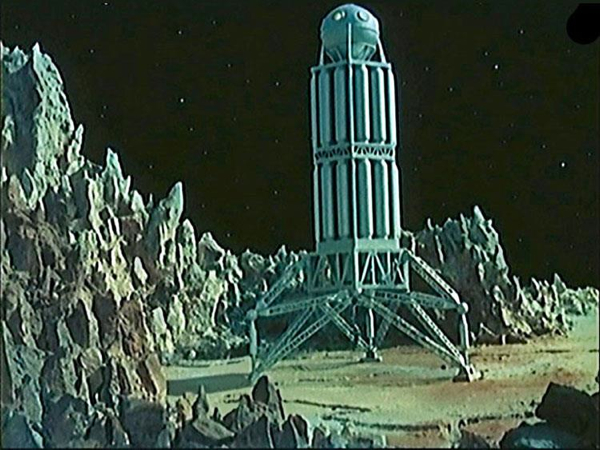 In the second half of Road to the Stars we see the Soviet roadmap of space exploration circa 1957, from the first men in space to a space station and, ultimately, a landing on the moon. David Hardy intersperses this with shots of paintings by Western space artists which the matte painters ‘borrowed’ for the film. There are also scenes that appear to have been directly lifted from the George Pal’s film Destination Moon (for example, a space walk scene is virtually identical), although the huge difference between the US movie and the Russian documentary is the presence of women doing jobs of equal responsibility to men in the latter. It’s no secret that Soviet Russia was not adverse to copying the West when it suited them (remember Konkordski). I think it would have been better to stick these comparisons at the end of the DVD in an extra. Although it’s interesting to see the similarities it comes across as a little bit gratuitous and breaks the flow of the original film. The imagery at the end is wonderful, plagiarised or not, and belongs to the tradition of great space artists like Chesley Bonestell and Hardy himself. The moon landscape is what have should have been, huge pointy mountains and cracked crater floors, rather than the dull grey hills of reality. 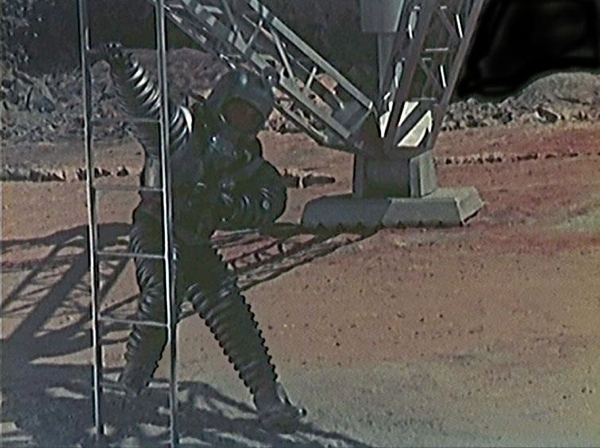 Road to the Stars is a fascinating piece of history. It’s available in PAL and NTSC DVDs from The Astroart of David Hardy.

UPDATE: The Light Dreams’ soundtrack to the film is now available for purchase separately from here.