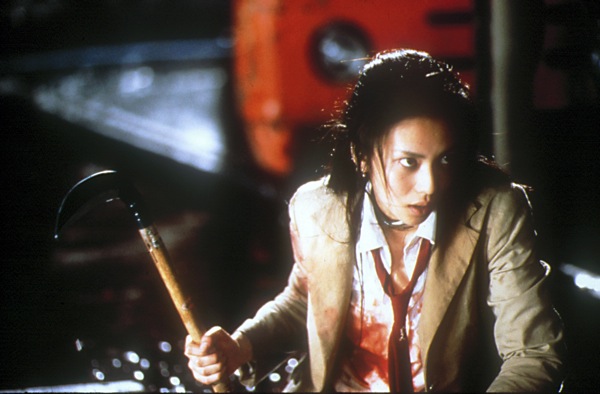 In last week’s post Jane Dougherty raised the interesting question as to whether modern Young Adult fantasy sanitises the world for its readers, serving them the illusory comfort of simplistic ideas of good and evil over which teens can triumph, as opposed to the more complex banal institutional horrors that characterise the 20th and 21st centuries. She mentioned The Hunger Games as one example of an illusory and reassuringly anodyne view of the world concealed under superficial grittiness, and that got me thinking of the Japanese movie Battle Royale (2000).

There’s already been plenty of debate about whether The Hunger Games is a copy of the Japanese movie, (and novel by Koushun Takami) and I don’t want to get sucked into that argument here. What is interesting about the first film is not so much the blood and gore, but its fascinating portrayal of the social and cultural issues that Japan faced after its economic bubble burst in the 1990s, and the impact the economic crisis had on the relationship between the young and the old. For those of you unfamiliar with the film, in an unspecified near future Japan, classes of high school kids are kidnapped and forced to fight each other on a zoned island. Each child is given a back pack with survival rations and a random weapon, which could anything from a submachine gun to a frying pan. They also wear exploding collars to prevent them straying into forbidden zones or trying to escape the island. They fight it out amongst themselves, overseen by Takeshi Kitano‘s tragically world weary teacher. 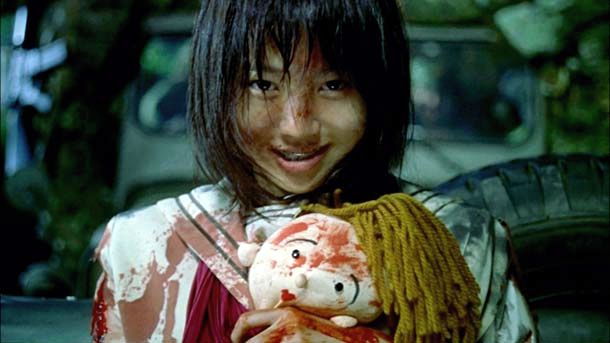 Winner of the previous game of Battle Royale

The film caused ructions when it first came out, and questions were raised in the Japanese parliament about the levels of violence in the movie. By Japanese film standards it’s no worse than, say, the Lone Wolf and Child series, but the fact that it was high school kids seeing each other off with machine guns, crossbows and sickles touched a nerve for reasons that went beyond the copious amounts of ketchup sprayed around the sets. A number of high profile cases of kids killing each other in real life pointed to a deep malaise in society’s treatment of youngsters, and the pressures it subjected them to. Battle Royale seemed to be rubbing politicians’ faces into an issue they didn’t want to face.

Japan possesses a very rigid hierarchical society which stood it in pretty good stead until the 1990s. The life path for a kid was mapped out to the nth degree – reasonably pleasant elementary education, sheer hell at high school (and at cram schools in the evening) swotting for university entrance exams, four years holiday at university itself, then a job for life in a giant corporate. Stifling conformity and obeisance to one’s superiors was worth it for the security and overwhelming sense of belonging to what can feel, at times, like a family of 120 million relatives. But then it all fell apart. Bad loans based on ludicrously inflated property prices came home to roost in the 1990s and the delicate framework of deals, complicity and back-scratching erected by the government, business and Yakuza (Japanese mafia) came tumbling down on top of the heads of the ordinary citizens.

Middle aged corporate workers started losing their jobs, the economy drifted into nearly two decades of stagflation and many young people began to realise the dream they’d been sold (study and get into a good university to secure your future) was a mendacious nightmare they couldn’t escape from. In the film the hero’s father loses his job and commits suicide, leaving his body draped in toilet roll covered in the word ganbaru (used all the time in Japan, it means ‘try hard’, ‘good luck’ and ‘please put up with it’). Another symptom of youngsters collapsing under societal pressure was the rise of the Hikikomori (literally ‘hiding away’), young men who locked themselves in their rooms for years, refusing to engage with society at all, while long-suffering mum pushed their meals under the door. Reports of children murdering their parents, and each other, in extreme violent rages suggested that the combination of intense social pressure to conform but with no guaranteed reward was creating a highly toxic situation. 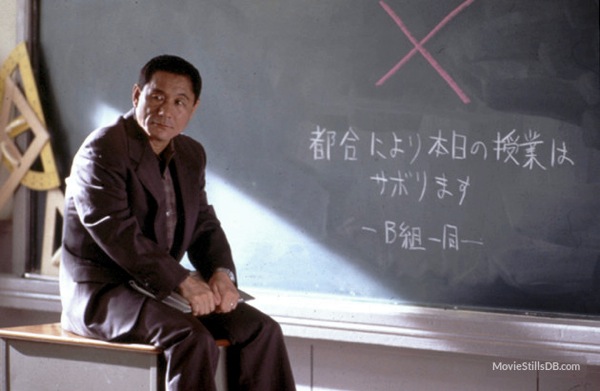 Battle Royale shows a society in denial hysterically clinging onto the very institutions that cause the problems in the first place, by shifting the blame onto its main victims – the kids. The most interesting parts of the film are the scenes that play out the dynamics of a typical Japanese school room to a grotesque degree. The ‘lesson’ at the start of the game, when the kids are forced to watch a childishly patronising video describing what’s going to happen to them, is spot-on in its recreation of the relationship between fractious kids and a teacher on autopilot. Having spent twenty years working in and with the Japanese education system I can vouch for the authenticity of the scene (apart from the knife-throwing and exploding necks). 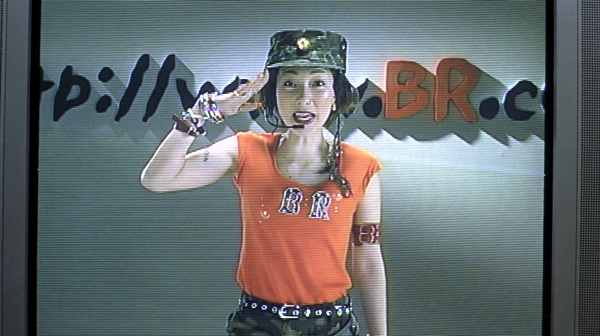 Hilarious send up of NHK TV for kids as hysterically cute ‘older sister’ explains how to kill your schoolmates.

Takeshi Kitano specialises in playing middle-aged men trapped in the system with stunning poignancy, whether it’s a detective plagued with bad luck in Hana-bi, or a petty gangster turned child minder in Kikujiro. In Battle Royale half the time he’s either consigning kids to their deaths, reading out the butcher’s bill in the matter-of-fact tones of a teacher making an announcement about wet playtime, or handing out umbrellas to stop them getting rained on, sharing ice lollies in a bizarre dream sequence or fielding abusive phone calls from his own daughter. At one point the heroine comments that in her dream he always seems sad and lonely. At the end of the film he exercises by himself to a tape in an overgrown playground – a perfect image of the passing of traditional, secure, corporate Japan.

Not the best translation of the original Japanese

Behind the spraying blood and high-octane ultra violence Battle Royale is a highly intelligent movie that perfectly captures the sense of unease at a society facing an economic and social crisis that the establishment (largely consisting of old men) refuses to confront, deflecting blame, instead, onto the young, or women or indeed, anyone and everyone else. In the end all are victims, the kids, the parents, Takeshi Kitano’s ultimately lost and desolate teacher, and the drone-like military who go into hilarious and spectacular meltdown when the students briefly manage to hack into the system.

Lack of context, and poor subtitle translation meant that Battle Royale ended up on the shelf marked ‘ultra violent and weird Asian shit’, next to Ichi the Killer and the Korean movie Old Boy (another brilliant satire), waiting to be picked up by ‘edgy’ dilettantes like Quentin Tarantino who were happy to reproduce the stylish mayhem while discarding any message as irrelevant next to the need to be cool. In the wake of The Hunger Games it’s worth watching again as a mordant commentary on an establishment increasingly baffled by the refusal of the young to do what it’s told and ganbaru.

← Dark Fantasy: is it suitable for the servants?
Corporate Samurai →