I grew up in the Swinging Sixties, and as my parents were an architect and an artist our house was full of the latest trendy examples of art and furniture. As I mentioned before, the interior of Kubrick’s space wheel in 2001 was our lounge, without the curving floor. My mother went to Leeds College of Art and in Yorkshire at that time there was a thriving Modern Art movement in the area. David Hockney was just starting out and his early pictures were shown at the Goosewell Gallery near Bradford. In 1977 my parents bought the gallery and we ran it as such until the early 1980s, though by that time Hockney had moved on to bigger things.

Pop Art was the big movement of the 60s. Although it’s associated with major American artists like Andy Warhol and Roy Lichtenstein, it actually began in the UK where it continued to flourish in parallel with the US version. The first Pop Art work is generally held to be Richard Hamilton’s 1956 collage Just what is it that makes today’s homes so different, so appealing?

Pop Art focused on the concept of the Media Landscape; a world of advertising, popular icons and mass-produced commodities that increasingly defined the world we lived in, and which was rapidly becoming as significant to us as the ‘real’ world. In consumerist 60s more and more people identified themselves by what they bought and wore. Pop Art took images from this world and turned them into bold, colourful art. It’s great to look at, but it also works as a critique of a civilisation obsessed with shallow consumerism and imagery for its own sake. You can find the science fiction equivalent of Pop Art in J. G. Ballard’s middle period novels – Crash, Concrete Island, High Rise and the magnificently weird The Atrocity Exhibition. 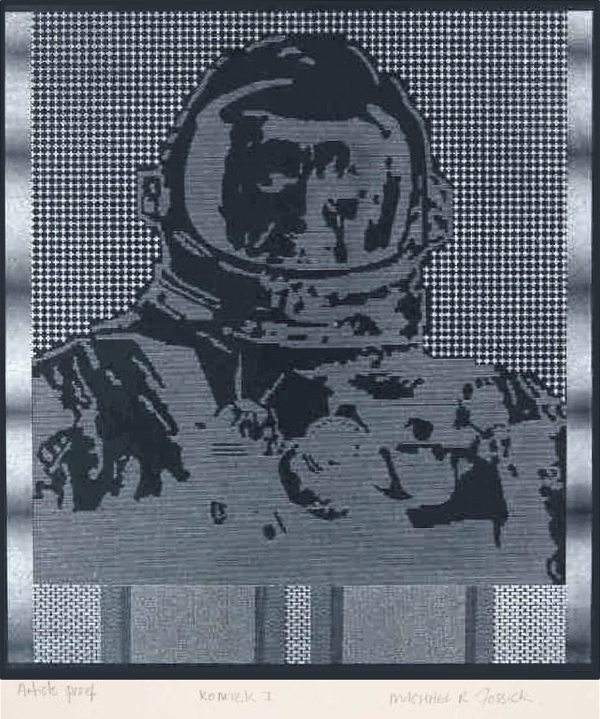 Since I was six years old this print hung on the wall of our lounge. It’s now above my desk in my study. It’s called Komtek I and is by the Bradford Pop artist Michael Fossick, who was a friend of my mother’s. It was a limited edition of 15 prints. What is interesting is that the master print is in the Smithsonian Institute, where it incorrectly states that its origin is the US (and that it was transferred from NASA). Fossick was from Bradford in Yorkshire. The blurb on the website describes how in the 1960s NASA and the US National Gallery of Art sent artists to NASA’s facilities to record what they saw, and to capture the great project that would eventually lead to man walking on the moon.

What many don’t know is that art and US politics were closely intertwined during the Cold War, to the extent that the CIA funded modern artists like Jackson Pollock and Mark Rothko. Abstract Expressionism, long derided as meaningless modern art at its worst, was, to the spooks, a perfect example of the American Dream. It was big, bold, romantic and passionate, and the guy who did it dressed like a cowboy. By the time Pop Art came around the CIA had lost interest, the new movements were a bit too cynical and anti-establishment. Nevertheless the Pop Art print Komtek I is a fascinating example of Modern Art meeting NASA at a time when the Gemini and Apollo programs symbolised all that was great in American civilisation. The fact that it was created by a bloke from Bradford in Yorkshire makes it all the more intriguing, and Komtek I has a decided Russian feel to it. 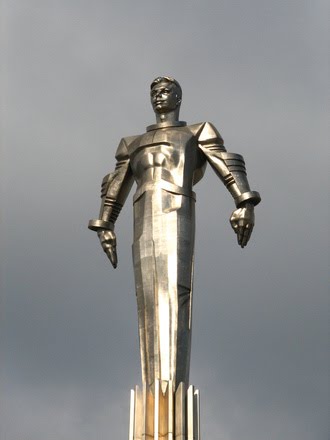 When I was in Moscow I spotted this statue of Yuri Gagarin. It dates from the 1980s and so it’s not quite Soviet Realist, rules had relaxed a bit. I think it’s great and I wish I could get a copy to put on my desk under Komtek I. I also would like to find out who the astronaut is in Komtek I so if anyone recognises him let me know.