Recently I’ve started playing a handful of point and click horror games, mainly because I do a lot of travelling and at the end of the day I often want to unwind with something simple I can put down and pick up whenever. Mainstream PC games can demand a lot of time and thought, and, if you’re playing one of the recent first person games like Outlast or Resident Evil 7, a powerful gaming rig. Point and click games are the essence of simplicity – you are presented with a scene to guide your character around and tapping on hotspots will bring up information or puzzles for you to solve. Myst was one of the earliest and most famous examples. Last year I reviewed the wonderful H. R. Giger – inspired Tormentum: Dark Sorrow which is a more recent member of the genre. Games like this rarely make significant demands on the technology and a lot of them have been ported to tablets or smartphones. 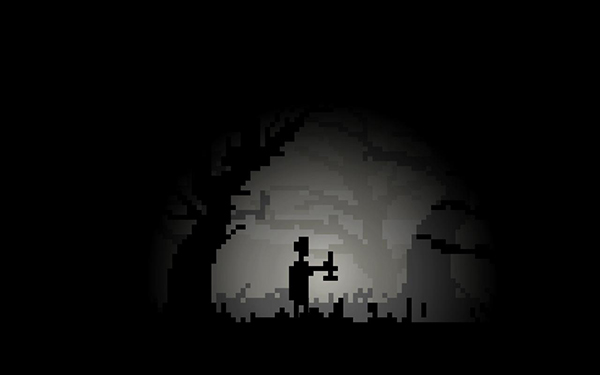 Point and click horror adds another wrinkle to the challenges of making a good horror game – specifically how do you create a game full of atmosphere and scares that echoes the best tales of Lovecraft, James, Stephen King etc? Game programmers are limited in the effects they can use – you can frighten people through a growing sense of dread, a feeling of trapped panic, a weird and dislocated atmosphere and jump scares. The best games combine all of these. Realistic first person 3d games have the easiest job (especially VR – just putting the headset on and finding yourself in a scary environment is enough to get the heart racing). Sound is also important – a creepy soundscape can make or break a game. In fact one sadly defunct game, Papa Sangre, relied on sound alone.

The Last Door Season 1 and Season 2 (available together in the Collector’s Edition) takes Point and Click to back to its absolute basics with simple pixel-art graphics that make it look like the game was made in the early 1980s. Interestingly enough this actually enhances the atmosphere of the game, because it forces the player back onto their imagination. The downside is that it looks too crude and blocky to be played on anything other than a phone or tablet screen, and in many cases it’s actually difficult to tell what you’re looking at, especially when you try and interact with the details of your environment. Fortunately you can highlight all the points of interest in a scene. It’s a bit of a cheat but it’s better than trying to figure out whether that smudge is something important (a document, the cat, a boulder?).

The story is an intriguing tale set in Victorian England and Scotland. The player goes in search of a missing friend who was a member of a cult seeking to break beyond ‘The Veil’ into a dimension of sinister horror. It’s filled with very obvious references to Lovecraft, Ashton Smith and similar writers – with a massive nod to Robert W. Chambers The King in Yellow (and in the Scottish episode – The Wicker Man) To be fair it avoids the standard plotline of mystery investigation leading to a final sanity-blasting cosmic horror. Instead it evokes a more elegiac sense of visionary madness throughout the entire story, as characters hop in and out of strange dream-realms more akin to the worlds of Clark Ashton Smith or Arthur Machen, than Lovecraft himself. With primitive graphics the game also relies more on building up atmosphere through text, although it does drop in a few jump scares, which are surprisingly effective despite the crude artwork. To be homest the plot became so convoluted at times that I lost the thread – but it was still a remarkably effective game and very creepy. On occasion the puzzles seemed a bit arbitrary (picking up a discarded feather to apply bitumen to repair an artefact is not an obvious solution) and this underlines an issue with Point and Click games when frustration and boredom with a particularly obtuse puzzle can kill atmosphere. On the whole it gets the balance right – and it’s a hugely enjoyable game for weird horror fans looking for something a bit more atmospheric and elegaic.

A while back I wrote an article for Weird Tales about eldritch gaming and the tension between evoking the fairly linear horror journey of a Lovecraftian tale to its final denoument, and the need for a player to have the sense of control and potential for exploration that makes games fun. The Last Door is pretty linear, as are all Point and Click games, but with the right balance of challenge and atmosphere they can evoke some very creepy moments without needing spectacular 3d graphics or Hollywood production values.