Peter Bradshaw – I spurn you as I would a Calot! 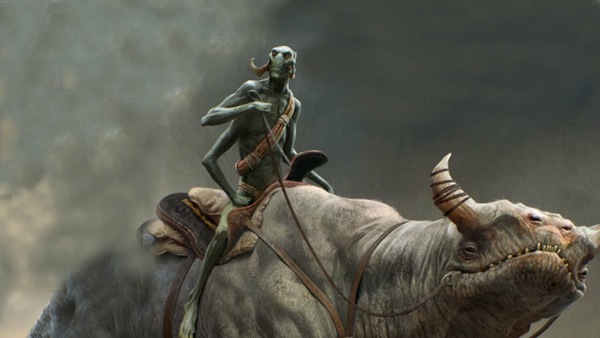 OK – ticket’s booked for tomorrow at the Odeon in 3D IMAX. Peter Bradshaw in The Guardian gave it 1 out of 5 and called it a ‘giant, suffocating doughy feast of boredom’. I’m giving him the benefit of the doubt even though it read like a typical self-serving ‘let’s sneer at Science Fiction because it’s not proper literature like what I read’ bit of pomposity.

So – arguments so far why John Carter is pants:

This is a little unfair as A Princess of Mars came out in 1917. Edgar Rice Burroughs pretty well invented the Swords and Planets romances single handedly, spawning countless imitators ever since. It’s a bit like saying Baz Lurhmann’s Romeo + Juliet was derivative of West Side Story and all the other two-enemy-kids-fall-in-love stories that preceded it. Well, not exactly but you know what I mean.

ERB was a proponent of the ‘make it up as you go along’ school of plotting, dictating multiple tales at once for his secretaries to type up and send off to meet deadlines. Whenever he hit a wall he’d just toss in the old ‘in one bound he was free’ card (literally as the ability to jump to ridiculous heights is John Carter’s chief skill on the Red Planet). He’d also conjure up sub-plots, monsters and villains on the spot when things started to flag. By the tenth book in the series even he was poking fun at his own often ludicrous storylines. He was also getting a bit confused as the famous 6-legged Mars rat turns up with only 3 in John Carter and the Giant of Mars (1940)! Finally, John Carter is a lot like Lord of the Rings. If you haven’t read any of the books it’s just a load of silly names and British actors in ridiculous costumes speaking portentously.

All films set on Mars are rubbish. Not strictly true. Flash Gordon’s Trip to Mars (1938) wasn’t bad. Neither was Total Recall, though it suffered from being directed by Paul Verhoeven and starring Arnold Schwarzenegger. That’s like getting a class of 8 year old boys to do The Importance of Being Earnest. Half way through they get bored, skip the intelligent bits and go straight for the ‘attacking the enemy base’ scene which ends in them all rolling around on the floor hitting each other.

Mars itself is hampered by the fact that it went from interesting (Canals, Ancient Civilisations, Giant Brains on Stilts) to dull (like the moon but red) to slightly more interesting (ancient sea beds and snow). The problem is that now the interest lies in its resemblance to a boring desert on Earth. Great if you’re looking for life, but as a backdrop to thrilling drama there’s not a lot to work with. The moon is still creepy, mysterious and different. Mars is identical to the gravel pit the BBC used for every alien planet in Doctor Who in the 1960s.  John Carter’s Mars is the old version, but because we now know there’s no canals or ruined cities we are all post-modern and sniffy about it.

It may well turn out to be disappointing. I’m determined to watch it with my 13 year old hat on, and also judge it by how I think Edgar Rice Burroughs himself might have reacted. Just seeing John Carter, Dejah Thoris and Tars Tarkas riding Thoats over the jewelled plains of Barsoom will realise a 40 year old dream. Having said that, if you didn’t understand that last sentence, it’s probably not for you.

Oh – and the TV mini-series of The Martian Chronicles was actually pretty good, despite being shot on a budget of around £9.50.