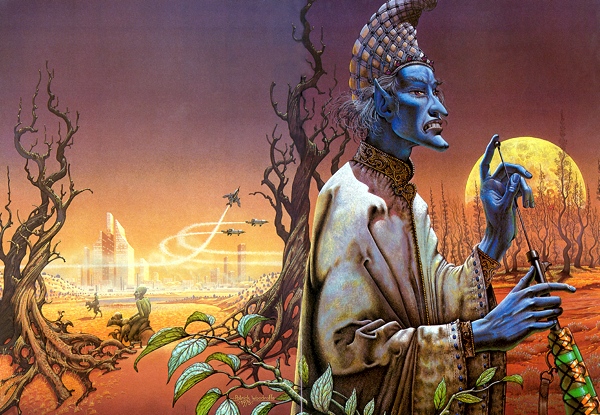 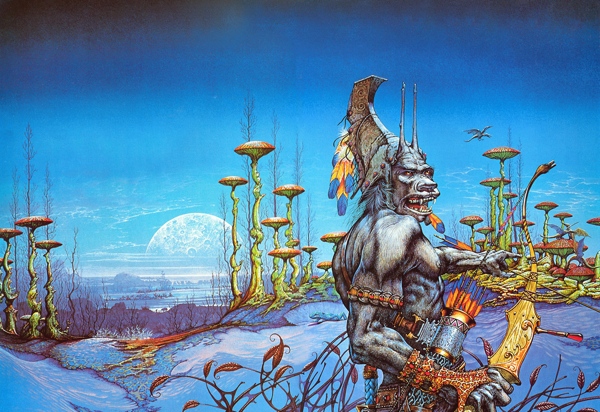 I’d already planned on doing an article on the fantasy artist Patrick Woodroffe when the news came in that he’d passed away and so, sadly, this has become my personal tribute to his powerful and often frightening imagination. Patrick Woodroffe was one of a small group of painters and sculptors working in the 1970s whose book covers stood out in a genre increasingly dominated by the Precisionist realism of Chris Foss and his many imitators. Woodroffe, like his contemporaries Ian Miller and Rodney Matthews, produced canvases that were an intriguing, and often disturbing, combination of fairy tale whimsey and twisted dream imagery. In his book Mythopeikon, published by Dragon’s World in 1976, he cited both Salvador Dali and the Dutch and Flemish Renaissance artists (Hieronymous Bosch and Peter Breughel the Elder) as among his main sources of inspiration. He was also working very much in the tradition of the Bohemian artisan creative of the 60s and 70s – local painters and sculptors scattered throughout the English countryside producing work that cleverly mixed together ideas from nature, folk lore, fairy-tale images and nursery rhyme nonsense shot through with doses of Freud and LSD. The narrative accompanying his early watercolour Masked Ball sums up this zeitgeist pretty accurately and could easily have been the sleeve notes from a Gong or Amon Düül album: 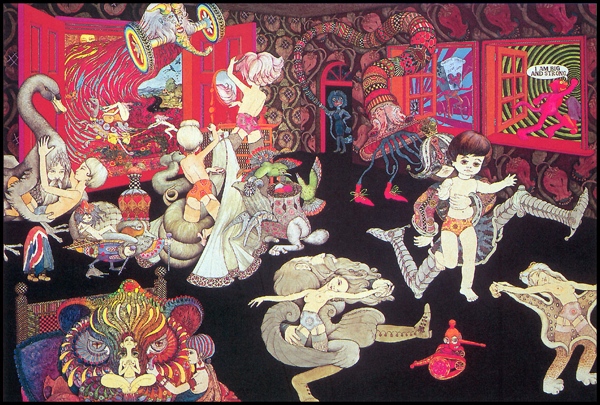 “I’m a tiger!” says the girl with the platinum hair. Her borrowed pelt invites caresses. The Rainbow Man, meteordynamic, spirit of the storm, spins in at the double doors.”

The grim realities of the late industrial Victorian age gave rise to a peculiarly English type of fantastic nonsense, epitomised by the writing of Edward Lear and Lewis Carroll. It’s little wonder that the collapse of the wartime social consensus in the 1960s, and a Cold War marked by the long shadow of the Bomb, encouraged the same. Like the Pre-Raphaelites they identified with, 60s and 70s art ‘rebels’ in England turned back to the imagery of child-like carnivals mixed up with a large dose of Freud and the odd tab of Acid.  At its worst it could be self-indulgent and narcissistic, but at its best, as in the paintings of Patrick Woodroffe, it had a wonderfully lunatic vibrancy that cheerfully stuck two fingers up at The Man, and the harsh media landscapes of American Pop Art. Filled with imagery from nurseries and picture books (especially smiling sun and moon faces) his non commercial works manage to tread the very fine line between infantile fantasy and full-blown freaky nightmare that characterises grotesque art. 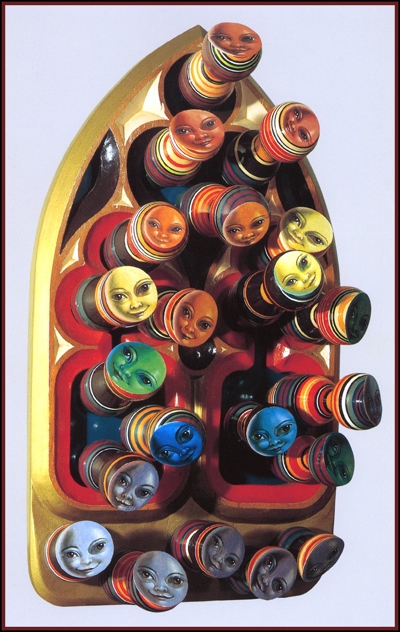 His 3D painting I’m Coming to Get You is a perfect example. With its benign sun and field of chirpy faces it looks like it belongs next to someone’s cot, but I wouldn’t want it in the house because I know it would give me nightmares for weeks. The fact that a lot of his work was in 3D doesn’t help – all it means is that it looks like all those strange creatures are emerging into our world where they really don’t belong. The Everlasting Covenant is just as bad, and the fact that it’s from a quote from Genesis doesn’t help much.

Patrick Woodroffe’s commercial cover art for publishers like Corgi stood out from the rest because of its sheer vibrancy, and the fact that he could give a book cover an incredible sense of place and character, even the images that don’t have strong single figure. The monstrous blue harlequin he created in 1975 for the cover of the Avon edition of Jack Vance’s The Gray Prince is a perfect example. Clearly influenced by Italian Renaissance portraiture the creature gives off a fantastic vibe of sinister, opulent evil combined with real tragedy. His triptych for Piers Anthony’ s Battle Circle trilogy (Sos the Rope, Var the Stick and Neq the Sword) has the same wonderful sense of both place and person.

Patrick Woodroffe’s figure work was often exaggerated or distorted, not from lack of skill but rather from the overall fantastic aesthetic he brought to the image. His covers were characterised by bright, vivid colours, a meticulous attention to textural detail and the desire to fill each painting with a wealth of information which rarely overloaded the picture. His covers for the Quartet Corum: The Prince with the Silver Hand series, which he acknowledged were influenced by the fruit and veg portraits of the Milanese painter Arcimboldo, match the baroque intensity of the books themselves and act almost as an emblematic index to the tales of the Eternal Champion. 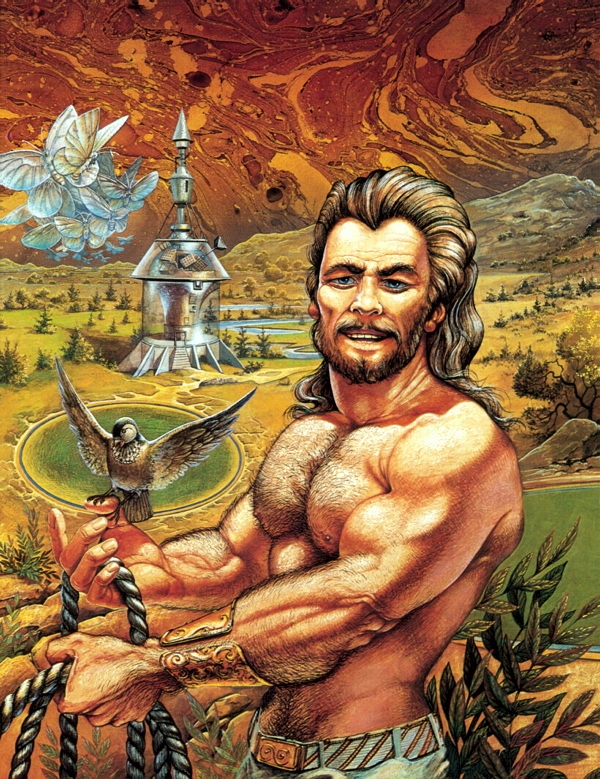 Inevitably given his interests and background, his spaceships were less assured. He also painted covers for such classic hard-boiled detective novels as Dashiell Hammett’s The Big Knockover and Red Harvest which, while unusual, look completely out of place in the context of the stories themselves. 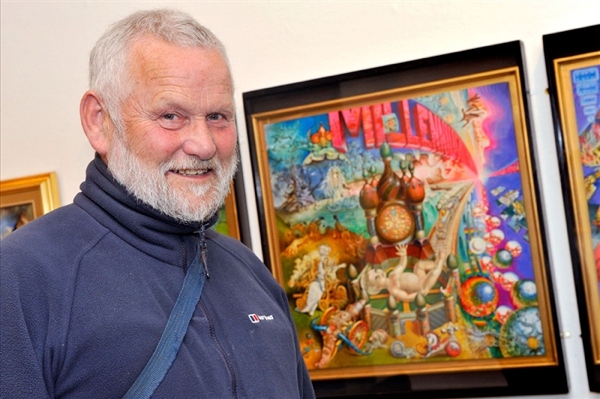 Patrick Woodroffe’s website is as quirky and original as the artist. His recent work saw a return to Flemish inspired wooden box triptychs filled with smiling suns and brightly coloured surreal iconography mainly inspired, it seems, by his own naturalist folk art take on Christianity. The dark scary edge has gone from most of the works and even to a grumpy old atheist like myself they represent a joyful and quite beautiful portfolio of works. It’s a real tragedy that Patrick Woodroffe passed away as his art would often lighten up a tired and derivative shelf of covers in W. H. Smiths in the 1970s and he rarely failed to do justice the fantasy books he illustrated.