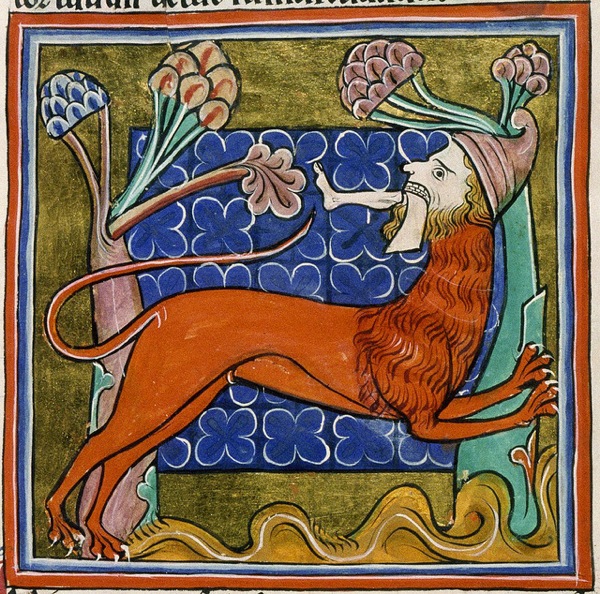 Pards and Manticores – A Medieval Bestiary

Herodotus the father of history divided knowledge into three types. Things he saw with his own eyes, information people told him which he could verify as true, and things he couldn’t verify and might easily be completely made up. He visited Egypt, and so when he writes about its manners and customs we can be assured that his descriptions are more or less accurate, if a bit quirky. Gold-hoarding giant furry ants living in India were clearly the deranged invention of someone he met in a pub

Medieval monks faced the same problems but magnified. Herodotus got about a bit. Your average Brother in 13th century Lindisfarne rarely ventured further than the monastery herb garden, and so their understanding of nature follows the same pattern as Herodotus’s writings. They can confidently talk about dogs, cats, mice and jackdaws but once they’re asked to describe creatures a bit further away they struggle. Lions, camels and elephants they can just about manage – after all Biblical tradition is full of those – but they rapidly come unstuck with Rhinocerii, Chameleons, Manticores and other fabulous creatures. This didn’t stop them having a go, especially in England where we have a unique tradition of beautiful illustrated catalogues of medieval creatures. One of my favourite books is the Folio edition of a Medieval Bestiary from the Bodlean Library in Oxford. It dates from round about the thirteenth century (the time of King Edward I) and is full of wonderful illuminated miniatures of the animals it describes. Bestiaries are a fantastic window onto the medieval mind.

To understand why they came up with stuff that seems ludicrous to us now, it’s useful to know some of the basic principles of medieval alchemy. To begin with everything had a secret name that concealed its true nature. When Adam named the animals he used the original language of Eden, which monks thought to be the language of God. This was lost when God destroyed the Tower of Babel and mixed all the languages up. If an alchemist could rediscover the true names of things he would have power over them. Bestiaries go to great lengths to determine the etymology of animal names – even if they’re clearly making stuff up again (“The name mule comes from the Greek, because the beast is yoked by the miller to the heavy millstone”).

Secondly medieval learning was founded on reasoning through association. If objects appeared similar in the great scheme of things, it was because they had real relationships that could be manipulated. To give a simple example – the sun is the greatest celestial object, the king is the most powerful man, the lion the strongest animal and gold the noblest metal. Therefore these four items are linked through mystical relationships that, if discovered, can allow them to be controlled. It’s all complete nonsense of course, but it was central to the medieval mindset.

Finally knowledge came from ancient books, not from reality. Plato and Aristotle received their wisdom more or less from God, even if they were pagans and it came to them in a slightly roundabout way (involving the Egyptian God Thoth, and Moses). So what they said was divine truth. If a monk looked out of the window and saw something different (e.g. a bear giving birth to something obviously a little bear, instead of an amorphous lump that it subsequently licked into shape) then nature had probably got it wrong, which was understandable because it was corrupt, sinful and messy, whereas God’s wisdom as described by Aristotle was eternal and true.

Bestiaries were essentially religious books. Medieval scholars would often misread animal behaviour by awarding it moral qualities. Thus if an ape “bears twins, she will love one and hate the other. If she happens to be pursued by hunters she will clasp the one she loves in front of her and carry the one she hates on her back.” Nearly every animal echoes a lesson from Scripture. The basilisk, which can kill a man by looking at him “signifies the devil, who openly kills the heedless sinner with his venom”. Often the desire to force an analogy leads to the good brothers dispensing misleading, if not fatal, advice. The lion, we are told, represents Jesus and is therefore filled with mercy and kindness. This is “confirmed by numerous examples: they will spare men lying on the ground, and will lead captives whom they meet to their home.” They also have sex face to face, as do the lynx, camel, elephant and rhinoceros – so perhaps the Can You Feel The Love Tonight bit in Disney’s The Lion King wasn’t so wide of the mark.

The Bodleian Library Bestiary cheerfully wanders all over the known world in a fairly random fashion. Ethiopia gets mentioned a lot, probably because it hosted one of the earliest Christian churches and so there were well-established lines of communication between it and rest of Christendom (by medieval standards anyway). The common language of Latin united religious communities in a wide-ranging network of information exchange, even if the information itself was often muddle-headed, apocryphal or just plain wrong. Outside the known world we are firmly in the realm of Bored Monks Making Stuff Up. The chameleon looks like a one-eyed multicoloured deer. The amphisbaena “is so called because it has two heads, one in the right place, the other on its tail. It goes in the direction of both heads, and its body forms a circle” and the manticore is bright red with a human face and three rows of teeth.

You have to admire the imagination of the monks, not least for the stunning illustrations, and we have them to thank for considerable chunks of the D&D Monster Manual. It’s a shame that manticores don’t exist, and that lions are a slightly less accommodating than their cuddly medieval counterparts. On the other hand there’s less chance of an unwary traveller being eaten because he lay down in front of a enormous hungry African carnivore hoping it would be all meek and mild like Jesus