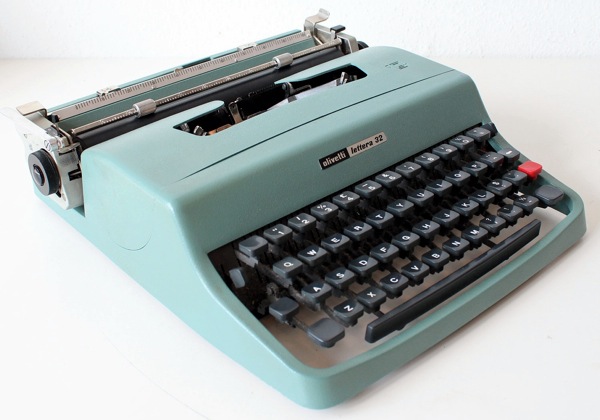 A Happy New Year to everyone! This is my one hundredth post and I thought I’d follow tradition by talking about what Santa brought me for Christmas.

When I was eight years old, and a precocious little sod,  I filled a couple of reporter’s notebooks from W. H. Smiths with a ‘novel’. My dad was impressed enough to buy me my first typewriter. He later regretted this because it meant that the noise of the office now followed him home as I banged out an endless litany of juvenilia – three novels rejected by Puffin (bastards), a short story read out on Radio Leeds and finally, seven issues of various SF fanzines – ending with 101 Ballooning Adventures That Thrilled the World (don’t ask). What I didn’t realise at the time was that the typewriter was an Olivetti Lettera 32, an Italian thing of beauty designed by Marcello Nizzoli that was later to become a style icon and emblematic of a new generation of roving gonzo journalists and counter-culture writers. It was the kind of machine Michael Herr would balance on his knee when sending reports from Khe Sanh. Leonard Cohen used the earlier version to write ‘Suzanne’ and other light-hearted masterpieces. Cormac McArthy’s Olivetti sold for $254,500 in 2009, and he treated himself to a replacement for $20.

My Olivetti eventually gave up the ghost before I went to University. I replaced it with an Olympia (if I remember, Olivetti’s were no longer available in North Yorkshire) before graduating onto an electric typewriter that had a kick like a mule and one of those strange death star rotating balls instead of type bars. In 1984 I bought a BBC Micro 32 and discovered word processing, so my typing days were over.

I was delighted, therefore, to get a genuine Olivetti Lettera 32 for Christmas from my kids, in full working order with a spare ribbon. It came completely out of the blue, I wasn’t expecting it at all. Opening the box resulted in a feeling of instant familiarity, combined with the bizarre sense of stepping back forty years in time to an era when every single manuscript document on the planet was thrashed out on a mechanical typewriter. I’ve been playing around with it over the last couple of weeks and it’s fascinating to drop back into the mind-set of writing with a portable, while getting to grips with having all the advantages of a word processor whipped away. Here’s some of the conclusions I’ve come to:

1. The Olivetti Lettera 32 was a piece of compact engineering genius. As you’d expect with Italian design it combines attention to detail with a really cool vibe. There are loads of little levers and widgets to adjust tab stops, page ends, margins, lock the carriage etc. Bits of the insides look as delicate as a clock. It’s also very light, though the turquoise body is aluminium and feels pretty tough. It would probably stop a couple of stray bullets through the window of the Saigon embassy.

2. We’re spoilt in the range of letters and typographical tricks word processors give us. There’s no number 1 for a start, you had to use the letter ‘l’ instead. You would also need to add accents with a biro afterwards (bearing in mind this is an Italian typewriter), and yet it has a bunch of fraction keys. You’re stuck with Courier, and you can underline for emphasis – and that’s it. It means you are closer to the words themselves, undistracted by any visuals, which is why editors and publishers prefer manuscripts to look like they’ve been bashed out on one of these machines.

3. Typing is physically hard work. You have to belt the keys all the way down to get an impression. By the end of the first paragraph my fingers started to hurt and the mistakes increased. How people learned to touch type on these machines I don’t know, they must have had digits like Arnie’s thighs after a few months. After typing for ten minutes I went back to my Mac keyboard and nearly broke the thing, I was belting it so hard.

4. Writing is like carving on marble, or doing a tattoo – there’s no room for error, no cut and paste or spell checking. It feels like you are following a one-way street with no room for manoeuvre. Of course if you did bodge things up you could put a line through it, or overtype (or get out the Tippex), but the whole process forced you to think more carefully about the words you committed to paper. If I remember, the rule of thumb was no more than two mistakes per page, so if you got to the bottom of your A4 sheet and made your third because your fingers ached you had to start all over again. A complete page of error-free typescript from an Olivetti Lettera 32 represents a real piece of hard work and craftsmanship. 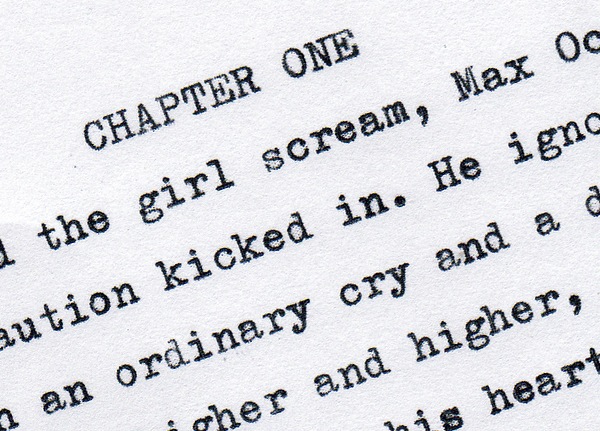 My kids inform me that mechanical typewriters, and especially Olivetti Letteras, are style icons with hipsters who sit in parks with them on their knees and no doubt type out homages to The Smiths, or lyrics for their own band Chlorine Shadows Fall Across My Soul’s Daisies. I couldn’t in all honesty return to composing on a typewriter, it’s too constraining and my workflow has changed from the ‘make it up as I go along’ process of that eight-year old me. But it’s a fascinating piece of history to have in the house, and a few minutes belting the keys takes me right back to the feeling of living in the late 60s and early 70s, especially if I put Tubular Bells on the Stereo Record Player.