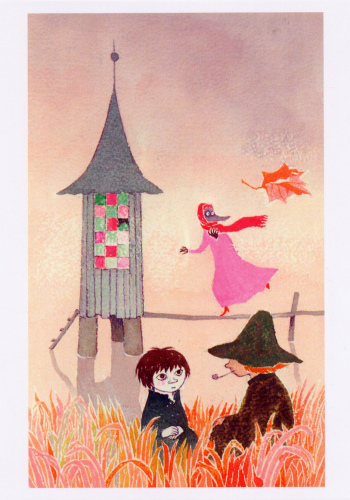 The cover artwork for Moominvalley in November

I’m a huge fan of Nordic crime thrillers at the moment. I’ve been reading Henning Mankell’s Wallander books, and watching the Swedish TV version. I’m also slowly working my way through the three series of The Killing. They are all about taciturn detectives struggling to make sense of the darkest reaches of the human soul, set against elegiac wind-swept shores and rainy night-time building sites. Very existential, although occasionally they throw up unintentional moments of comedy for those who don’t understand Danish or Swedish. Swedish has a slight sing-song quality to the ignorant English ear, so when someone says ‘He’d already been disembowelled before he died’, and sounds like the chef from the Muppets it’s disorienting to say the least. I could also swear that Wallander called someone a ‘pømpërse førking ërshøle’ the other day, but I might be wrong.

Which brings me onto the Finnish author Tove Jansson (1914 – 2001) and her books about the Moomins, and the wonderful news that The Moomins and the Great Flood is available in English in hardback for the first time since 1945. It’s one of her earliest books, though many of the characters are there in one form or another. The essential canon in English consists of nine books: Comet in Moominland (1946); Finn Family Moomintroll (1948); The Exploits of Moominpappa (1950); Moominsummer Madness (1954); Moominland Midwinter (1957); Tales from Moominvalley (1962); Moominpappa at Sea (1965) and Moominvalley in November (1970). The author, Tove Jannson, also wrote a comic strip version published in the London newspaper The Evening News from 1954 to 1975. In addition there have been innumerable spin-offs and TV series. The Moomins are particularly big in Japan . My daughter, currently studying at Kobe University, proudly showed me her pack of Moomin-shaped biscuits last week, and we played ‘Who the hell is that supposed to be?’ via Skype. 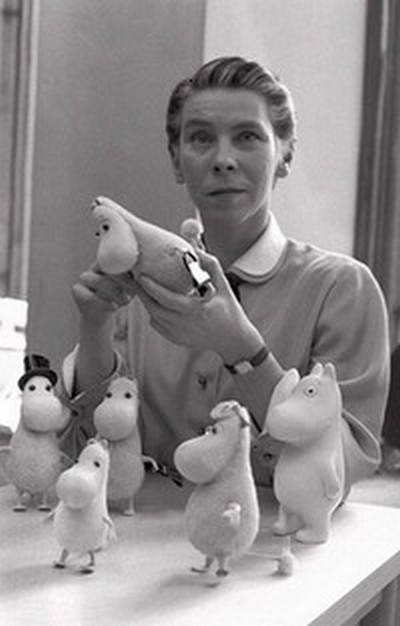 On the surface the Moomin books are a collection of tales about a variety of cute creatures that live in or near Moominvalley. Years of cartoons, fluffy dolls and comics have reinforced this idea. Tove Jansson had a wonderful imagination and an uncanny knack of creating just the right combination of the familiar and the dangerously creepy. The Groke, for example, is the darkest creature in the books, a monster that represents the negation of everything, and she wears a dress. The Hattifatteners sail the seas in little boats on an eternal quest for something, giving electric shocks to anyone who crosses their path. For dangerous, yet exciting villains, the Hobgoblin who lives on the moon and rides a black panther is hard to beat.

Yet underneath the cute, quirky characters and their adventures there lurks a sombre undertone of anxiety and loss that grows as you make your way through the books. The first four are jolly enough, but from Moominland Midwinter onwards the sense of worried bafflement at an incomprehensible universe, and even at the characters’ own states of mind, gets harder to ignore. Essentially most Moomin stories involve a disaster or massive disruption of one kind or another; a Comet, a Flood, dangerous magic Hat etc. The Moomins respond by having an adventure at the end of which they return to the safety of their little blue house. However, with Midwinter, the disruptions are no longer out of the ordinary. They are either natural (Moomintroll wakes up from his hibernation in the middle of winter by mistake) or proceed from the character’s own obsessions. In Moominpappa at Sea father has a mid-life crisis and drags the family off in search of a lighthouse. Fewer things  happen and more and more the Moomins and their friends wander round feeling lonely or baffled, pretty similar, in fact, to Kurt Wallander when he stands on his beach after solving yet another motiveless and depressing murder. 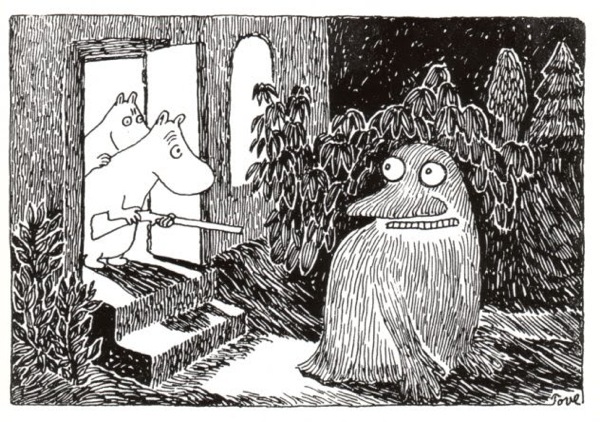 The Groke – the utter negation of everything

Which brings me on to Moominvalley in November where the Nordic existentialism-ometer goes off the scale. Tove Jansson’s mother died the year it was written, which probably explains the overwhelming sense of loss in the book. Basically it’s a Moomin book without the Moomins, as the family has gone away. Other characters from the series, Toft the orphan, the neurotic Fillyjonk, Grandpa-Grumble, the Hemulen and Snufkin all develop their own obsessions and, in doing so, become increasingly isolated from the others. Toft conjures up an imaginary monster called the Creature, finally confronting it in the forest and persuading it of the futility of railing against the world; “‘It’s no good,’ said Toft, ‘We can’t hit back. Neither of us will ever learn to hit back'”, and then the orphan banishes his equivalent of the little black dog to a blue sparkly void. The Fillyjonk tries to behave like Moominmamma so that others will like her. The creatures have a picnic where, as in the disastrous Box Hill picnic in Jane Austen’s Emma, everyone argues. The Hemulen builds a tree-house which collapses. All the characters in the book seem to be trying to recreate their ideal version of life with the Moomins, and they all fail, so the book reads like a long elegy on the subject of lonely disappointment. At the very end of the book Toft sees the light from the Moomin’s returning boat and goes down to the jetty wait for them. 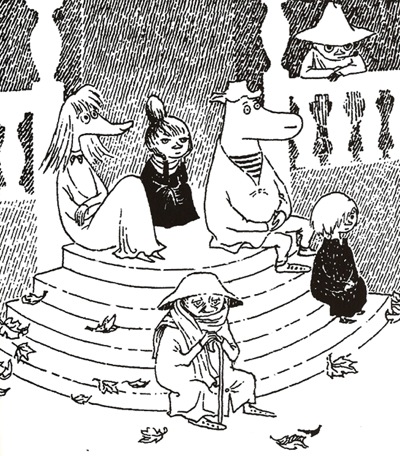 Basically Moominvalley in November is Waiting for Godot for Finnish 10-year olds, and there is a worrying sense that, despite Toft seeing the boat, it might all be just a figment of his lonely imagination and they will never return. The blurb on the back of the Puffin edition of 1971 reinforces this feeling of irrecoverable absence – the creatures are waiting for the Moomins “Yet how is it, they wonder, that the Moomins are so hazy in their minds, though they so badly want to see them?” Those of us who have lost people close to us know how hard it is to remember them, memory only gives us so much detail, but not enough for us to really see the people we want to recall. Jansson never wrote another Moomin book, Wikipedia claims that she couldn’t find the happy Moominvalley again. For those of us who still associate the Moomins with fluffy toys on sale in Helsinki airport or cute Japanese biscuits, this last book is a shock, and feels a lot closer to the dark world of Sarah Lund and Kurt Wallander. 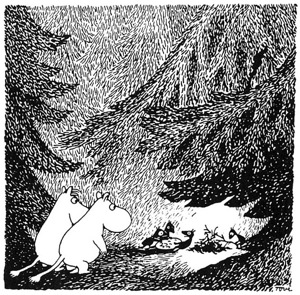 Sarah Lund and her colleague stumble across another gruesome crime.