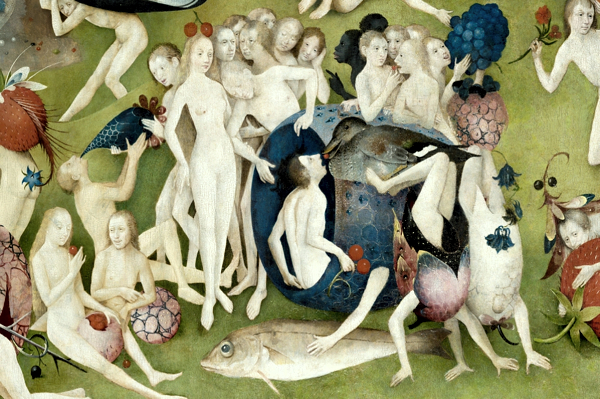 More Grotesque – the world of Bosch and Bruegel

This is the second post in a short series about the Grotesque, that sub-genre of Horror and Fantasy that’s characterised by physical distortion, dream imagery and the ordinary made monstrous. In this article I’m going to talk about the Grotesque during the Renaissance, specifically in the works of artists like Hieronymous Bosch and Pieter Bruegel the Elder. The history of the Grotesque is really odd because during this early period it was positive, whereas in the 19th and 20th century, in the hands of writers like Dickens and Kafka, and artists like Goya, it became relentlessly negative, dark and horrific. So why the change, and how can the Grotesque, which we associate with revulsion, be seen as the imagery of fun and playfulness?

Part of the problem is one of definition, and the difficulties of imposing modern ideas on the past. Language changes for a start, in Jane Austen’s day nice meant precise, rather than the modern meaning of blandly pleasant. Similarly grotesque has shifted in meaning, from a reference to amorphous decorative arts to the ugly and distorted. Secondly people often make simple value judgements, calling things grotesque because they don’t understand what they’re looking at. In the past grotesque was a lazy response to things that didn’t fit in with Western ideas of art and beauty. Nazi art critic Robert Scholz  typically referred to Modern Art as degenerate and ‘grotesque’.

We run up against this problem time and time again with the paintings of the 15th century Dutch artist Hieronymous Bosch, who was ‘rediscovered’ in the 1960s and 70s after being largely dismissed as a crude oik compared to contemporaries like Botticelli. In the Psychedelia age, swimming in LSD and suffused with ideas poached from Freud, Bosch’s paintings seemed the work of a visionary genius who’d somehow tapped directly into the world of dreams, especially his famous triptych The Garden of Earthly Delights, painted between 1490 and 1510. The middle panel, in which naked hedonists frolic on piles of enormous fruit and crawl in and out of strange alchemical vessels, is Woodstock as it Should Have Been, while the famous hell scene on the right (with its Portrait of the Artist as Weird Boat-Shoed Tree Trunk Thing) is the ultimate Bad Trip. Again, this is imposing modern Freudian theories on the past, twisting the original to fit a modern template of Nightmares from the Id instead of trying to put the artwork into its historical context.

Bosch’s imagery still has plenty of people scratching their heads because he was drawing on images and symbols from Dutch proverbs, Renaissance alchemy and the ideas of the mystical sect he belonged to, which had its own esoteric symbolism. We might look at a fish devil with an iron cauldron hat eating sinners and then pooing them out of a glass bottom, and wonder what this guy was on. Members of the Brotherhood of Our Lady in ’s-Hertogenbosch (the town where Bosch lived and worked) probably nodded sagely because they got the references and appreciated the moral lesson behind the image. Bosch’s paintings were also part of a wider, popular response to an increasingly ossified and corrupt Church of Rome and this is where the link between the Grotesque and the Carnival in Renaissance culture appears.

In the late Medieval and early Renaissance world established Christianity was a pretty unforgiving, ascetic and heavy-handed political tool run by a Church more or less in cahoots with the State. For the peasant it was all about putting up with misery and knowing your place in the Great Chain of Being (God and the angels at the top, King and Nobles in the middle, then you at the bottom, somewhere between Rats and Turds). The spiritual man denied the flesh and sought to achieve grace through a purity of soul and heart. The loutish villein wallowed in filth, understandably obsessed with the sinful cravings of the body – such as hunger, thirst and lust. Pieter Bruegel the Elder’s delightful painting The Land of Cockayne shows the peasant idea of heaven – a place of endless food and booze where cooked chickens run round in easy reach and one poor guy has passed out, spoon in hand, after eating through a hill made of pudding. So the lower orders fixated on everything below the navel, while the Church and the Spiritual focussed on everything above. For most of the year the aristocratic Head ruled the peasant Stomach, Privates and Bum, except on the day of Carnival. 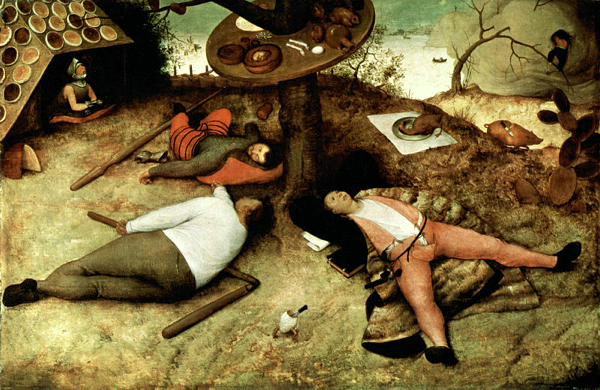 The tradition of Carnival that Bosch and Bruegel knew stemmed from the Roman Saturnalia. Part of the festivities involved the inversion of the natural order. For one day the roles of slave and master were reversed (to a degree) and a King of Fools elected. This later turned into the festivals before Lent, where everyone feasted before giving up chocolate or the medieval equivalent in the run-up to Easter. For a brief period of time the world was turned upside down, and all the gross physicality of peasant life was celebrated at the expense of the ascetic. The glorification of eating, drinking, fornicating and passing out on the toilet was an 24-hour raspberry aimed at the Church, who were reasonably happy to tolerate a brief orgy of vice because it allowed people to let off steam before the chains went back on. Bruegel’s painting The Fight Between Carnival and Lent (1559) sums this up perfectly. At the bottom of a panorama of village life filled with people playing, eating and boozing two figures are having a joust. The guy on the right, gaunt and miserable with a bucket on his head, represents the Pope armed with what looks like a flagellant’s bat (for a bit of flesh-mortifying). His opponent, fat and jolly, rides a wine barrel, has a pie for a helmet, is armed with a BBQ skewer and has an eye-watering cod piece.

So in this context the Grotesque, with it association with exaggerated bodily functions, the destruction of the natural order and pagan amorphism, is an exuberant (albeit short lived) revolt against the asceticism of the Church and all its self-controlled pieties. Medieval religion would keep us all neatly compartmentalised in a chilling framework in which the soul and spirit triumphed over our nethers. Bosch and Breugel’s grotesque and funny depictions of daily life were part of a resistance to this grim world-view rooted in, and valorising, all those aspects of popular peasant life that the Bishops sneered at. 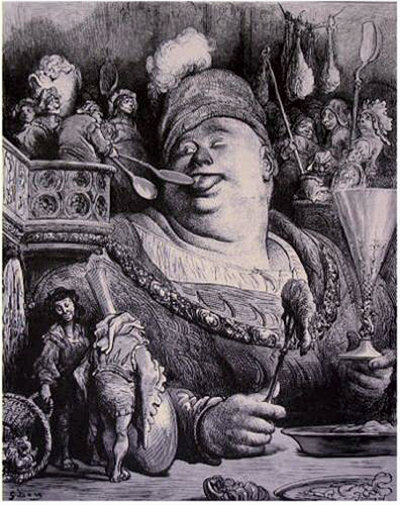 The Carnival Grotesque of Bosch and Breugel reached its apotheosis with the publication of Françoise Rabelais’s book Gargantua and Pantagruel, a five-book epic tale of absurd gluttony, excess and toilet humour first published (and then banned) in the early 16th century. Despite (or perhaps because) he was a monk Rabelais turned the crude nonsense knob all the way up to eleven. Here’s a representative quote:

The occasion and manner how Gargamelle was brought to bed, and delivered of her child, was thus: and, if you do not believe it, I wish your bum-gut fall out and make an escapade. Her bum-gut, indeed, or fundament escaped her in an afternoon, on the third day of February, with having eaten at dinner too many godebillios.

And on it goes, and on and on, like a not very funny edition of the UK comic Viz. After reading the first joke once it soon gets unbelievably repetitive – with endless grotesque absurdities liberally spattered in manure, vomit and fart humour. As a great work of humanist literature it’s perhaps not on a par with, say, Don Quixote, but it’s a perfect example of the Carnival Grotesque, where the earthy peasant world gets a brief chance to laugh in the face of sour-mouthed spiritualism, and fling a few choice turds at the vestments.

In the next article in the series I’ll have a go at explaining why this exuberant and comical grotesque culture switched into a far darker genre of madness, nightmares and monsters as the centuries progressed. In the meantime if you want to find out more about the Carnival Grotesque the definitive book on the subject is Mikhail Bakhtin’s brilliant study Rabelais and His World.