I’ve been a fan of memory systems for years, especially the Memory Palace method of the ancient Greeks and Romans. Known as the ‘System of Locii’ this is based on the principle of using places to remember things. This is how it works – you think of somewhere you know (such as your house) and in your imagination you divide it into specific locations (bathroom, bedroom etc.). When you want to memorise things you create exaggerated images or symbols and, in your imagination, place them in the locations you’ve chosen. When the time comes to recall the information you mentally walk through your chosen place and as you enter each room you will ‘see’ the images of the things you want to remember. To give a really pedestrian example – let’s say you need to buy oranges, chicken and milk. In your imagination you might fill your bath with oranges, have a giant chicken sitting on your bed and a cow being milked on the landing. When you visit the shops you imagine you’re back at home and when you see the images in your mind you remember what you wanted to buy.

The system is incredibly powerful, and was developed and used for thousands of years. The advent of print meant that people no longer had to commit huge amounts of information to memory and the ‘art’ went underground (it was also associated with Alchemy, and therefore regarded with suspicion by the Church). It became a trade secret among stage magicians and others who continued to tap into its amazing ability to fix information in our heads. Most card counters use a variation of the Memory Palace system to make huge amounts of money in the casinos, before they get found out and their photos circulated on the banned lists. Recent discoveries in neuroscience suggests that it taps into fundamental structures of the human mind, our ability to navigate space combined with our imagination, which is why it works so well.

The example of a shopping list I gave above is not particularly interesting, but the Memory Palace can be used to remember incredible amounts of data. At the moment I’m using it to memorise European history on a year by year basis from 0 AD (I’m up to 1500). To give another example, in my imagination I can see a Mafia boss eating an ant pie in Ilkley Station in Yorkshire. This tells me that the Roman Emperor Antoninus Pius ascended the throne in 138AD (I’ve introduced a second memory system here which is used for numbers, the Mafia boss represents the number 38). Now, when I get bored with long train journeys, I can ‘walk’ through history in my head.

Creating a Memory Palace takes time and practice and there are disadvantages to using real places. Typically you will associate a whole range of extraneous information with a location in the actual world. I can’t think of my home without including my family and the cats, and they can get in the way of the things I want to remember. The problem is exacerbated in public spaces. I have to make the mental effort of emptying Ilkley Station of people before I stick my image on the platform. The alternative is to create imaginary locations – palaces and villas of the mind – but these can often be difficult to visualise as accurately as a real place, and so the associated imagery is weaker. These were two things I struggled with until I came across Minecraft.

For anyone who’s been living in a cave for the last few years, Minecraft is a sandbox game that allows you to build anything you like in an infinite world using simple blocks. It’s essentially a virtual version of Lego, though you are limited entirely to cubes. It has two modes – Survival and Creative. In Survival mode you have to mine for materials to make things to defend yourself against randomly spawned monsters. In Creative mode you have access to all the building blocks, and don’t have to struggle against enemies. I’m using Creative Mode to build memory palaces and the results are fantastic. It gets round the problems of random association you get with real places, and gives concrete form to imaginary buildings, making them more ‘real’. Right now I’m using it to learn the periodic table of elements – here’s a quick tour of a section of my Minecraft Memory Palace:

This is part of the palace devoted to Transitional Metals on the periodic table (hence the big TM on the wall). 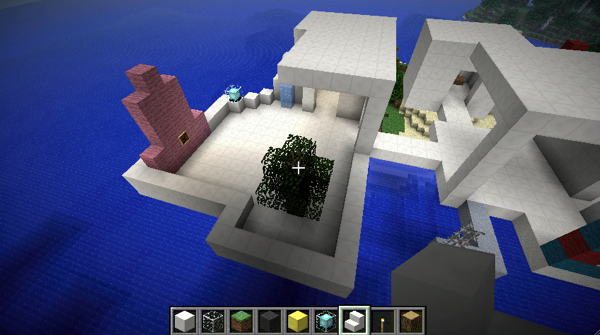 This room contains images for four elements. The tree represents Tantalum, it’s the tree from Hades that held the fruit that blew out of reach whenever Tantalus reached up to eat it. The big pink tongue is Tungsten, and the blue box is a box of Rennies indigestion tablets (Rhenium). Through the archway is Osmium.

Below is the cave of the Sybil, deep underground where I have built a complex of rooms for the Alkaline Earth Metals. In here is Beryllium. 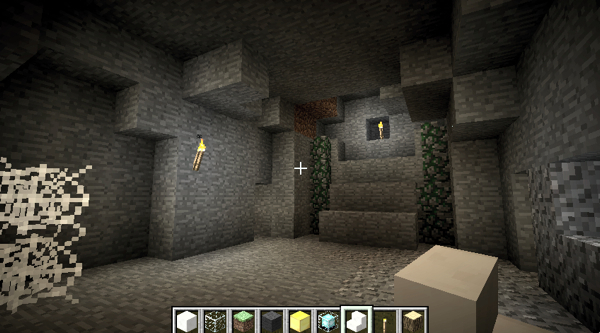 Minecraft is crude and blocky, and you have to use your imagination to fill in the details. This is actually a good thing because, in the end, the information sits in your brain. That means I can review my knowledge of the periodic table by ‘walking’ through my Memory Palace in Minecraft, or in my head when I have nothing else to do. Each walkthrough reinforces the information, embedding it in my long-term memory. This is only the beginning, Minecraft is such fun to play with I’m adding rooms for all sorts of things I need to remember for work, my writing and my own learning. You could use this system to build entire plots for novels, for example. You can also add information as you come across it. I’m using a memory system for remembering numbers that uses famous people. For example, King Arthur is the number 74. By having him stick Excalibur in the big pink tongue I remember that the Atomic Number of Tungsten is 74.

The classic book on Memory Palaces is Francis Yates’ The Art of Memory. The best contemporary guide I’ve come across on how to build such a palace is Dominic O’Brien’s How to Pass Exams. Minecraft can be downloaded from here.