I’ve  just been to see the play Mary Shelley by Helen Edmundson, performed by the Shared Experience theatre company at Winchester Royal Theatre. It was fantastic and I recommend anyone to grab tickets while they can and go and watch it.

The play deals with Mary Shelley’s relationship with her father, the anarchist philosopher William Godwin, and her love for Percy Bysse Shelley, which resulted in Godwin cutting off all communication with her for two years. In her introduction to the play, Helen Edmundson says that one of the things she wanted to explore was Mary’s dysfunctional family which, patched together from the remnants of other relationships, was itself monstrous. The action takes place on a single set dominated by huge bookshelves and filled with a constant mist which blurs the border between the domestic drama and the dream-sequences. The performance style is a mix of perfectly timed textual, and physical theatre, occasionally reminiscent of Stephen Berkoff’s early interpretations of Kafka. 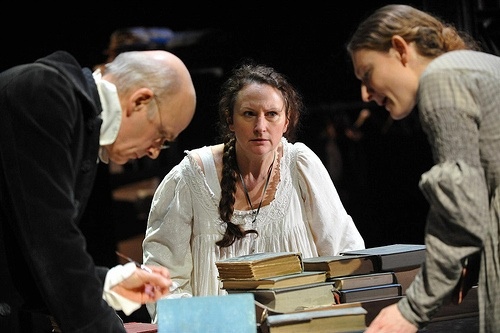 There are only six actors, playing William Godwin, his three daughters, Godwin’s second wife and the poet Percy Bysse Shelley. Normally this scenario lends itself to caricature. Of the sisters we have the wild Romantic (Mary), the quiet intense one (Fanny) and the ditsy airhead (Jane). William Godwin is the academic struggling to apply his radical philosophy to a world he doesn’t quite understand, and then there’s Mrs Godwin the fussy harridan. What prevents the play from descending into cliche is the brilliance of the acting. No matter how archetypal the character, the actor invested them with a complex humanity that was utterly gripping. Kristin Atherton was wonderful as Mary Shelley. Shannon Tarbet did an excellent job of rescuing Jane from being just an irritating foil and made her as tragic as Mary and William Godwin themselves. When Flora Nicholson, wonderfully understated as Fanny, stood at a coach stop with real tears streaming down her face you knew you were in the presence of world-class performers. Being a cynical old Yorkshire git it’s not often I get choked up at the theatre but this play definitely succeeded.

The only character that remained problematic was Percy Bysse Shelley. This wasn’t the fault of Ben Lamb who did a great job of portraying the poet. Unfortunately the legend himself hasn’t worn well. In this cynical age it’s hard to understand the impact Shelley and Byron had on women in the early 19th century. The play compounds this by setting him up as a demigod, “quite the most vibrant human being I’ve ever met”, and irresistible to every woman. What rolls up is a dilettante serial-shagger who would send even the thickest 20th century woman running in the opposite direction. Shelley was perhaps the weakest of the six main Romantic poets, but the play doesn’t even give him the benefit of quoting a few passionate lines to stir up the heart. Helen Edmundson’s Percy belongs to that class of men who, like H. G. Wells, (and Austin Powers for that matter), used the ‘let’s defy convention and embrace free love, and maybe your pretty friend could join us tonight as well, baby’ line to ruin a string of hopelessly infatuated women, often simultaneously, in the same bed. This makes it difficult for modern audiences to accept why someone as intelligent, vibrant and strong-willed as Atherton’s Mary Shelley would fall for such a ‘dirty dog’ (as one spectacularly pissed member of the audience shouted out while Percy groped Jane). What was a novelty in 1814 is a cliche in 2012 (though given that Mary tells her father she’s just read Samuel Richardson’s Clarissa she should have spotted the twenty-foot high ‘love rat’ sign floating over Shelley’s head the instant he walked through the door). 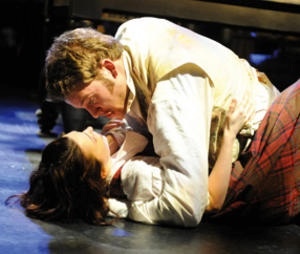 The play sets out to explain the writing of Frankenstein, though the novel is only alluded to until the last scene. None of the usual myths surrounding the books’s genesis are in the play (the ghost story competition, contemporary experiments in Galvanism etc.) though Mary’s dream of her baby daughter coming back to life in front of the fire is re-enacted to great effect. Instead the whole play works towards the thesis, revealed in the last scene, that Mary herself is the Creature and her father, Godwin, is Victor Frankenstein. In the context of the play this makes sense. Frankenstein has always been a tricky one to interpret, partly because the book itself has disappeared beneath the mythology of the story and partly because Mary herself lay down quite an effective smokescreen in the preface to the 1831 edition. The traditional interpretation based on this, and which the 1930s film supported, is that Frankenstein dares to play God and is punished for his blasphemy. Given that Mary was the daughter of William Godwin and Mary Wollstonecraft, and married to the biggest atheist on the planet at the time, this seems a bit odd. It’s likely that Mary herself threw this out in later editions to divert critics incensed that a girl of 18 could write such a horrific and blasphemous book. Her support for the ‘man punished for doing things only God should do’ thesis is reminiscent of the Beatles saying that their claim that they were ‘bigger than Jesus’ was not just another sarky comment from John Lennon, but a ‘sad reflection on the loss of faith in the 20th century’. If anything Frankenstein is an extended attack on God. Frankenstein makes a creature, abandons him in disgust and then seeks to judge him. The creature openly identifies himself with Milton’s Satan, one of the greatest Romantic rebel heroes, and in the book hurls accusations at his creator:

Remember that I am thy creature; I ought to be thy Adam, but I am rather the fallen angel, whom thou drivest from joy for no misdeed. Everywhere I see bliss, from which I alone am irrevocably excluded. I was benevolent and good; misery made me a fiend. Make me happy, and I shall again be virtuous.

It’s the God as an indifferent tyrant argument, which fits in with Mary’s subtitle of the book ‘the Modern Prometheus’, a reference to Shelley’s play Prometheus Unbound, itself a re-working of Aeschylus’s original Prometheus in which Zeus is portrayed as a cruel autocrat and the titan as the hero attempting to liberate mankind.

In the play Mary Shelley the monster/creator relationship is between Mary herself and William Godwin. The summary of Mary’s accusation to her father is that he (and her mother) fashioned her and yet when she lives out their beliefs and philosophy Godwin, victim of incessant compromises, rejects her in horror. It’s a thoughtful interpretation and the final scene of reconciliation between the two (“And I am the monstrous creator, I suppose,” says Godwin) packs a massive punch. My only slight worry is that you need to have read the original Frankenstein to get the connection between Mary’s comments and the Creature’s eloquent pleas to Frankenstein. For those who only know the films the Creature is just an inarticulate monster with bolts in his neck.

Shared Experience have had their funding cut, which has left them with an annual shortfall of about £83,000. After seeing Mary Shelley bring a literary subject alive with such power I think they definitely should be supported. Please email them on supportus@sharedexperience.org.uk to find out how you can help them produce more great theatre, hopefully with a Gothicky/Science Fictiony slant.