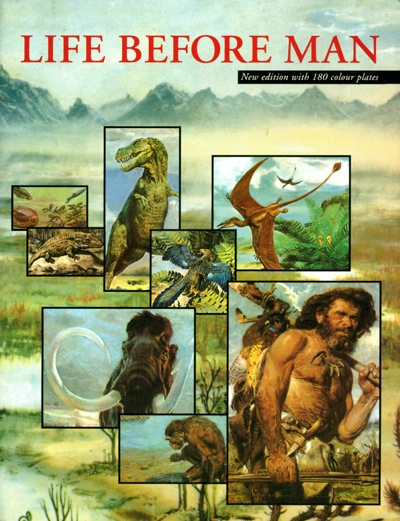 On my last trip up to Yorkshire I found one of my favourite childhood books, Life Before Man, by Zdenek Burian (pictures) and Zdenek V. Spinar (text), published in 1972 by Thames and Hudson. I bought this when it first came out and it entranced me for years.

Nowadays photorealistic dinosaurs are de rigueur, thanks to Jurassic Park (1993) and TV series like Walking with Dinosaurs (1999) but in the 60s and 70s making prehistoric beasts come to life was a real challenge. Films went for two approaches to the problem – either using stop motion rubber models (Valley of the Gwangi (1969) and A Million Years BC (1966)) or gluing fins onto real lizards, poking them with a stick and filming them in slow motion (The Lost World (1960) and Journey to the Centre of the Earth (1959)). They also tended to mess things up historically by introducing women who ran about screaming and spraining their ankles mid-flight, as was required by the artistic sensibilities of the time. Only the Stravinsky sequence in Fantasia (1940) came anywhere near a decent attempt at scientific accuracy.

Artists had been trying to recreate the beasts since Victorians fell in love with the monsters in the middle of the 19th century, though first attempts came up with some spectacular errors. Most famous of these was the sculpture of the Iguanadon intended for Crystal Palace gardens. The artist knew the monster had a spiky bit but was at a loss where to put it, so he stuck it on the end of the creature’s nose (it belongs on its thumb). He also made it four-legged, not bipedal, though this did help when a gala dinner was held inside the mould in 1853.

Zdenek Burian’s paintings were revolutionary because of their obsessive attention to detail, and the almost near-photographic execution. Many of them are also ‘action shots’ rather than the rather dull static images of the day. Scientific discoveries have rendered some of the images inaccurate, his biped dinosaurs appear to walk like humans dragging big tails, rather than like birds with their rear ends stuck out for balance. Yet both his dinosaurs and their surroundings appeared completely believable, so much so that one foil-hatted UFO-hoaxer used Burian’s picture of Pteranadon as a ‘photograph’ proving he’d journeyed back in time with the help of his alien chums.

Life Before Man is also remarkable for the sheer number and scope of the pictures. The book is chronological and spans prehistory from the cratered volcanic wilderness of 4600 million years ago, through the Precambrian all the way through to the Quaternary era and the New Stone Age. Not only does it show prehistoric monsters in all their glory but also the rise of the mammals, and eventually the different stages of man’s evolution.

After the dinosaurs the mammals are a bit dull; big cats, hairy elephants and odd looking rinoceri, but Burian comes into his own again with wonderfully evocative images of early people engaged in various prehistoric pursuits such as Chipping Flints or Pointing at Things and Grunting in Alarm. Here the quality of the images is patchy, but when he’s at his best you could believe you are looking at portraits of living beings. Here’s his rendition of Homo Erectus from half a million years ago.

Sadly Life Before Man is currently out of print but stray copies occasionally appear on Amazon.

Here’s a link to Billy Meier’s website in which he answers accusations that the photo of a Pteranodon he took while time travelling was simply a copy of Burian’s painting. He backs up his argument with a letter from Ptaah the Plejaran of the Andromeda Council who blames it on Quetzal, another alien, for going off on one and stealing all the original negatives.