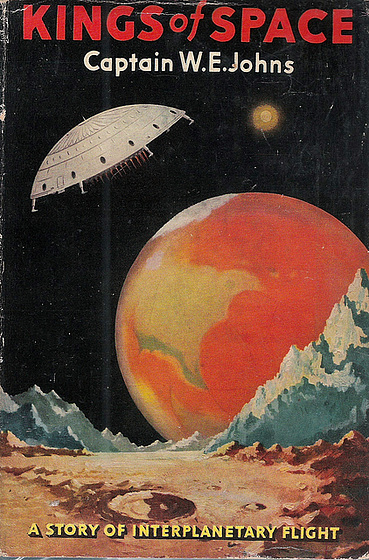 Captain W. E. Johns is best known as the author of nearly a hundred books about Biggles, the pilot who started his career flying Sopwith Camels against the Hun over the trenches in World War I and who, by 1968 was foiling the nefarious deeds of British Post Office heroin smugglers when his author died of a heart attack mid-sentence. I was a massive fan of the early Biggles books. They are resolutely ripping yarns for boys, full of details of biplane warfare that only someone who’d actually flown in the first World War would know (Johns was a bomber pilot at the end of the war, and was shot down and imprisoned by the Germans). The early editions of the books are unusual for their occasional grimness, with references to booze, fags and shell shock that were removed from later, more kid-friendly editions. Biggles had a grip on multiple generations. I vividly remember being on holiday at a Whitby hotel when I was eight and an old gentleman in his 70s ( another veteran of the War to End All Wars) kept stealing my Biggles books to read until his wife shouted at him to stop.

Johns was on less firm ground when he turned his attention to space. I’ve just picked up a first edition of his book Kings of Space (1954) from my local Oxfam. This was the first of ten science fiction novels he wrote between 1954 and 1963, and describes trips to the Moon, Venus and Mars in the company of Group Captain Timothy Clinton, R.A.F., his son Rex and Professor Brane aboard the Spacemaster, a flying saucer the mad boffin has built in his shed at a remote castle in Scotland. It’s very much in the tradition of Grand Tours of the Solar System, with a handful of cardboard characters flying from planet to planet and going oooh and aaah amid long passages of scientific exposition designed to inform the young reader. In fact the book gets most of the science wrong. It’s not simply a case of astronomy being less accurate in 1954, Johns seems to make science up as he goes along and I suspect that his research came from hazy recollections of stuff he’d heard or read, rather than actual hard facts. The illustration of the solar system at the start of the book bears this out. The artist has made it look like a spiral galaxy with planets dropped in at random. The inner planets are in approximate order, on the other hand the gas giants appear to be stuck in as an afterthought by an artist who doesn’t have much of a grasp of their orbits.

The book follows the convention whereby the nearer a planet is to the sun the younger it is. Therefore Venus is identical to Earth during the Jurassic era, with a few cavemen thrown in to liven things up. Johns’ invention deserts him here. Instead of coming up with any new monsters he merely drops in a bunch of terrestrial dinosaurs. “Pterodactyls!” exclaimed the Professor. “I have never studied paleontology closely,”, a statement that pretty well sums up the science in the whole book. The Moon has a thin atmosphere with plants and creatures “so grotesque, so uncouth” that the artist can only fall back on a painting of an armadillo to represent their utterly alien appearance. Mars is also disappointingly pedestrian. The adventurers find dying Martians who are described as tall thin chaps in Roman togas, and whose ancient civilisation (hence the togas) has succumbed to mosquitoes.

The dialogue is wonderful, “What do you think of my welding?” is one opening conversational gambit. “Please remain seated while I make preliminary tests of the external conditions.” says the Professor when the Spacemaster lands on the Moon, “While you are waiting it might be a good moment to have a sandwich.”

This sums up the whole atmosphere of the books. Like They Came from Mars, Johns’ novel reduces interplanetary travel to the same level as a Sunday afternoon stroll round the perimeter of a small English village. Local eccentrics build flying saucers, eat sandwiches on the Moon and confront interplanetary horrors with the responses of a slightly alarmed vicar. “Bless my soul!” is about as passionate as it gets. In one brilliantly Pythonesque scene in a later book, The Man Who Vanished Into Space (1963) the adventurers find the body of a Scotsman floating in the void, wearing a kilt. In my earlier post on Cockcroft’s short tale I suggested that writers like this were desperately trying to assert a comforting vision of parochial English life in a world where the British Empire no longer held sway. In Johns’ book wherever the travellers go they find the reassuringly familiar – dinosaurs on Venus, Romans on Mars, Scotsmen floating in outer space. Yet Johns was not as much of a Little Englander as he’s been painted. Like many who fought in both wars, he had enough experience of a world beyond English village life to understand that British chaps weren’t the only heroes on the planet. There are enough positive characters from other lands in his Biggles books to refute crude accusations of racism (though the extent of Johnny Foreigner’s moral worth does seem to be measured by how like a decent Englishman he is). Unfortunately in space both Johns’ imagination and his grasp of science fail him, and we are left with an odd version of The Famous Five Do Something Thrilling in Orbit.

Johns was up against it. When he penned Kings of Space, writers like Robert Heinlein, A.E. van Vogt, Ray Bradbury and Isaac Asimov were writing books of staggering imagination. By the time his last novel in the series appeared, New Worlds was in full swing, with British science fiction and fantasy writers tackling themes of politics, sexual identity and urban psychology that would have severely alarmed Professor Brane and his chums, to say the least. Nevertheless, as an essay in nostalgia with Monty Python undertones, Kings of Space and its sequels are hard to beat.