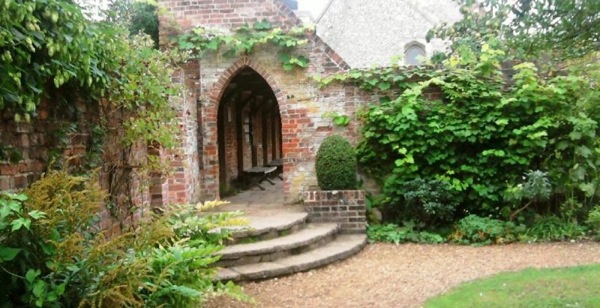 I live in Romsey which is a little market town on the eastern edge of the New Forest in the UK. It’s an ancient place. William II’s body was carried through here in 1100AD after his hunting ‘accident’ and we’re close to Winchester, capital of King Alfred the Great (871 – 899). The problem is people don’t notice the history. It’s so easy, when going about your day to day business, to ignore what’s around you. For example, my daughter’s Orthodontist is in a 14th century house (from the time of Henry V). All the floors and ceilings are wonky and you bang you head on low beams all the time. It’s a listed building so if they break a window, by law they have to get a craftsman skilled in 14th century glazing to fix it, using original materials and techniques. It’s not cheap. 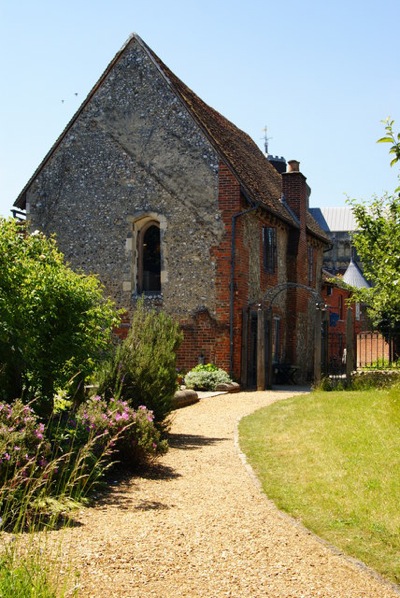 One of the highlights of Romsey is King John’s House, a lodge built in the early 13th century for the King to stay with his knights when they came down to the forest to hunt. I have a lot of sympathy for King John. My mother gave me my middle name, Guy, from Guy of Gisborne, the villain in Robin Hood, who was a friend of King John, so I feel a certain misplaced loyalty. Like Richard III he gets unfair bad press. John inherited the kingdom from his idiot brother Richard the Lionheart who squandered the country’s finances funding Crusades in the Holy Land. Almost immediately he was excommunicated for refusing to accept the pope’s nominee for the post of Archbishop of Canterbury. Next John lost Normandy (and became known as John Lackland) and then tried to raise more money from the barons to get it back. He merely succeeded in pissing off the nobles so that they forced him to sign the Magna Carta. This is hailed as A Good Thing because it supposedly marks the triumph of the British People over tyranny. It doesn’t. All it did was protect the interests of the Very Rich from the Very Very Rich. 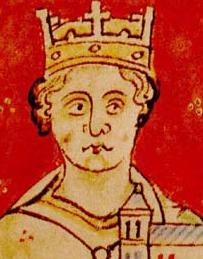 Anyway, King John’s House is an amazing building and it is literally a ten minute walk from my house. It sits in a little medieval walled garden. The plants grown here are all species that were cultivated in days of yore. You can just imagine Eleanor of Aquitaine, John’s mother, holding her famous Court of Love here if she hadn’t stomped off to Provence in a big huff in 1168 before attacking her husband, Henry II, with her armies. Family spats were quite dramatic in those days.

The house itself was extended in Tudor times. In the photo above you can see the line of the original roof. Inside it’s a typical old building with bulging walls held together with iron pins, undulating floors and beams to smack your head against.

There’s a tea shop, a little museum and you can actually hire the top floor for events. The two most amazing things about the house, to my mind, are the deer bone floor and the medieval graffiti. John and his knights hunted deer and boar in the New Forest. The original floor of the house was made from the bones and antlers of the creatures they killed and it’s still there to this day. The medieval graffiti is upstairs. After hunting the knights would spend the evening in jolly revels, part of which included defacing the furnishings with the points of their daggers. They were an illiterate lot so there’s no ‘Hugh de Montfort thynkes Rupert of Toulouse bee ye Grayte Nobbe’. Instead they scratched their own heraldic arms, or the portrait of someone they weren’t overly fond of, or just generically rude symbols. It’s astounding to stand in front of a wall and look at a bit of vandalism created by a knight in armour 800 years ago. 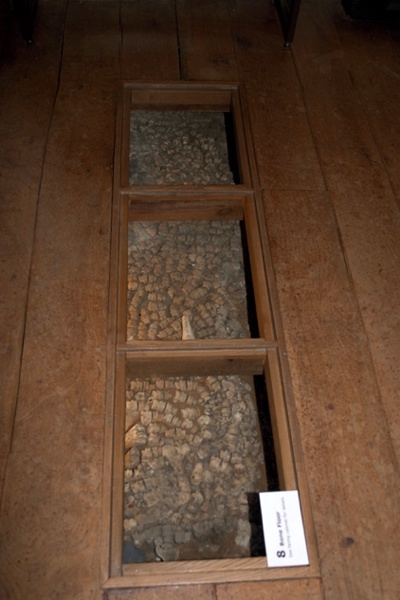