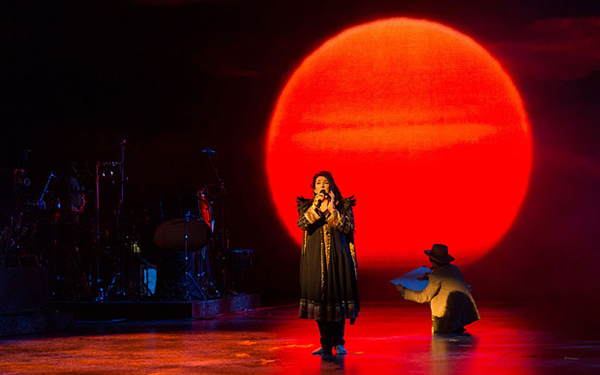 Kate Bush: Before the Dawn.

Spoiler and bad language alert: If you are planning on seeing the concert and you don’t want any of it revealed then read no further.  Also Kate Bush swears like a trooper.

I planned on writing this straight after seeing the concert but it’s taken me about five days for my thoughts to marshal themselves into any form of coherent sense. There was a point in the evening where I realised I’d paid a couple of hundred pounds to watch a 56-year old woman whirl around in circles on a stage doing bird impersonations – and that it was one of the best things I’d ever experienced in my life and well worth every penny. I’m not going to spend the next few paragraphs gushing about how brilliant the entire performance was – plenty of other people have done a better job and I realise not everyone reading this is a dyed in the wool addict like myself. Even Kate Bush herself clearly still doesn’t understand the effect she has on people. The opening line of the program explains that one of the reasons she wanted to go on stage was ‘to have contact with the audience that still liked my work’ (my italics) as if her fan base was about the same size as the two dozen losers who turn up to see Spinal Tap play second fiddle to a puppet show, and not the 80,000 who bought her tickets within the first 15 minutes of them going on sale.

A good point to start is probably comparing it to her concert The Tour of Life 35 years ago, which I saw at the Manchester Apollo. At that time she had only two albums to her name, The Kick Inside and Lionheart so the two-hour set saw her go through her entire catalogue. She sang every song as a unique piece, changing costume for most, accompanied by a couple of dancers and the illusionist Simon Drake. As with Before the Dawn it was designed as a theatre piece in three acts, and everyone was supposed to sit down instead of leap out of their seats and pogo in the mosh pit like they did at all the other concerts. Kate Bush herself was 21 and by her own admission terrified, and didn’t interact with the audience at all, something which Charles Shaar Murray picked up in his damning review in the New Musical Express (his was a lone voice amid universal praise but then the resolutely pro-punk NME was a pretentiously grim slog at the time).

In Before the Dawn she happily chatted with the audience, which on occasion was a bit surreal because she has a charmingly sweet, occasionally girly, voice, which contrasted alarmingly with (for example) scenes in which a puppet apparently batters a bird to death with a rock or she got chased round the set by fish skeletons. The two programs also make for an interesting contrast. The Tour of Life had very little in it and smacks of winsome theatre school artiness in its alternating poetry and stream of consciousness description of scampering through ‘rush-hour London, with … dancing clothes under my arm’. Before the Dawn, goes into fascinating detail about the concept, planning and execution of the two main dramatic pieces based on the The Ninth Wave sequence from the Hounds of Love album and A Sky of Honey from Aerial. It’s a wonderfully down to earth and often funny account of the herculean effort and massive attention to detail that made the evening such an incredible experience. In this prissy age I’d forgotten how sweary we all used to be in the 70s. Kate Bush clearly hasn’t (though to be fair she’d been submerged in a tank for 6 hours by this time and was suffering from mild hypothermia):

“You can’t have bigger fucking waves.” I said. “They go all over the fucking live vocal and they sound like a fucking bathroom, not the fucking ocean!”

The concert was divided into three parts. For the first twenty minutes or so she sang half a dozen songs from Hounds of Love,  The Red Shoes and Aerial. It’s clear she’s put a dividing line between the first four albums, and the rest, and that she sees the core of her musical development in longer concept pieces from The Ninth Wave onwards – so no Wuthering Heights or Babooshka. To be honest if she’d just carried on working her way through a set at the front of the stage with the band behind her it still would have been a stunning concert, but then she switched into the first of the two theatrical pieces and the genius knob went all the way up to eleven. The Ninth Wave is a thirty minute journey through the mind of a woman floating in the sea after falling overboard, oscillating between fear, desperate loneliness, hope and finally a glorious reaffirmation of life. The piece combined film, TV, music, dance, lighting, creepy sets and costumes and a big helicopter-style machine that lowered over the audience.

The second piece, after the interval, was taken from Aerial. It’s less of a narrative and more a linked mood-piece centred around images of a sunset, birdsong and painting. This part of the staging used the motif of a painter’s dummy come to life to wander through the scenes evoked by the songs. This is when it struck me that Kate Bush’s vision is often a lot more sinister than I’d previously thought. Like the best fairy tales her music, and the visions she constructs around them, have a very dark side that on occasion took me by surprise. I’d always listened to A Sky of Honey (one of my favourites) as a beautiful elegiac sequence evoking long summer evenings and love. As the puppet wandered around the stage, and birds flew across the projection screen, it constantly felt as if the whole piece teetered on the edge of a nightmare (it takes a lot to make an enormous slow motion blue tit look threatening). The fact that the band wore bird skulls for this part didn’t lighten the mood. In fact the whole concert peeled away layers from the songs so that even though I know them all inside out and backwards, I now look at most of them in a new light. 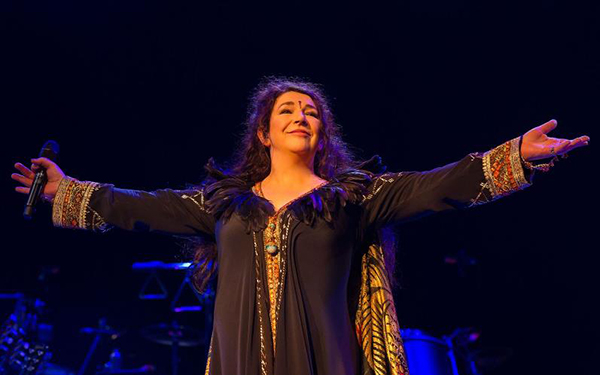 It was clear from the very beginning that Kate Bush was having huge fun throughout the entire three hours. When she sang the penultimate song, the achingly beautiful  Among Angels from 50 Words for Snow, her voice was just as rich and pitch-perfect as at the beginning. As someone said she’s set the bar impossibly high now and shown everybody else up big time. Interestingly I saw the gig the same week U2 dumped their tired going-through-the-motions stadium-rock on the world’s iPhones and the contrast was just embarrassing.

So it was as expected – certifiably insane and meticulously beautiful. Five days later I’ve still got all her songs running on an eternal loop through my head in that voice, to the point where I can’t listen to anything other artist right now because she drowns them all out.