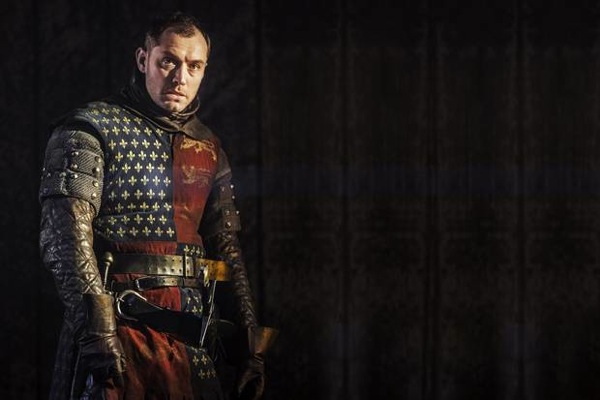 Yesterday I went to see Jude Law in Henry V at the Noël Coward Theatre in London. We were right up in the gods, sitting on what was to all intents and purposes a shelf glued to the wall among the lights. This was a bit nerve wracking after the collapse of the Apollo Theatre ceiling this week, but we survived. The play itself was superb, a high-speed minimalist interpretation with a cracking performance from Jude Law. One of the advantages of living near London is the chance to see big name actors on stage, whether it’s Patrick Stewart in The Tempest, Kristin Scott Thomas in The Cherry Orchard or, in this case, an older, slightly fatter Gigolo Joe from A.I. chewing up the scenery in one of Shakespeare’s histories. For those who think pretty boy leads from Hollywood are chosen primarily for their looks and charm, Jude Law can definitely act and he turned in a brilliant interpretation. 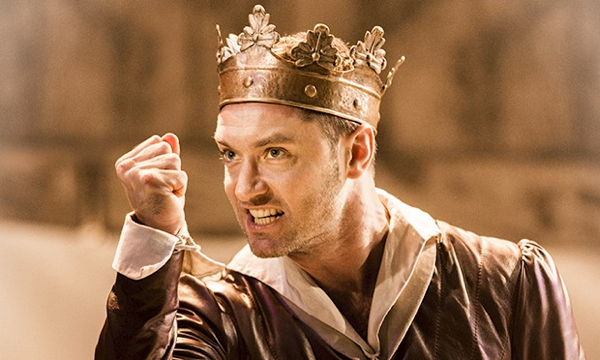 Henry V is a very odd play. On the outside it looks like a rabble-rousing jingoistic piece with little plot and no real villain. Henry V and his raggedy army of plucky yeomen defeat the arrogant French at Agincourt – that’s it. This image of the play largely stems from the long shadow cast by Laurence Olivier’s 1944 film. During the early days of the war Olivier began a series of radio broadcasts in which he read excerpts from Shakespeare. The idea for a film of Henry V developed from these and the movie began production in 1942. It’s a beautiful piece of cinema, with sets based on medieval miniatures, and a suitably Thespian performance from Olivier. Anything that might detract from the image of an outnumbered ‘band of brothers’ defeating a massively superior and arrogant foe was edited out, while the stirring speeches before Harfleur (‘Once more unto the breach’) and Agincourt (‘We band of brothers’) were given the all-stops-out treatment as glorious set pieces.

In reality the play’s morality and jingoism is far more ambiguous. Once we put aside the inevitable pleasure any stout hearted Englishman feels at seeing the French getting a kicking, the war is entirely a cynical exercise in power-grabbing and propaganda. First Henry IV tells Henry V to go and have a foreign war to distract people from problems at home (Henry IV Part 2). Then, at the start of Henry V, the church concocts a specious claim for the king to bribe him so he doesn’t pass a law against them. Henry V’s invasion of France is therefore nothing more than a speculative land-grab based on a dubious interpretation of ancient inheritance law. The worst thing the French do is be a bit rude by sending King Harry a box of tennis balls and telling him (understandably) to sod off. To be fair they also bribe three nobles to do him in, but that’s an act of desperation after he’s already mustered his army and is preparing to sail for the continent.

Kenneth Branagh’s film of the play (1989) tackled this head on. Instead of the bombastic speechifying of the earlier film’s opening scenes, the decision to go to war becomes a muttered conspiracy in the shadows between the bishops, egged on by Henry’s uncle, played by Brian Blessed. Branagh’s film was made when the Falkland’s War was still fresh in people’s minds – a cynically engineered piece of adventurism that saved Margaret Thatcher’s political career. The battle scenes in Branagh’s Henry V are grim, bloody and soaked in mud, a far cry from the Medieval Day Out of Olivier’s Agincourt. 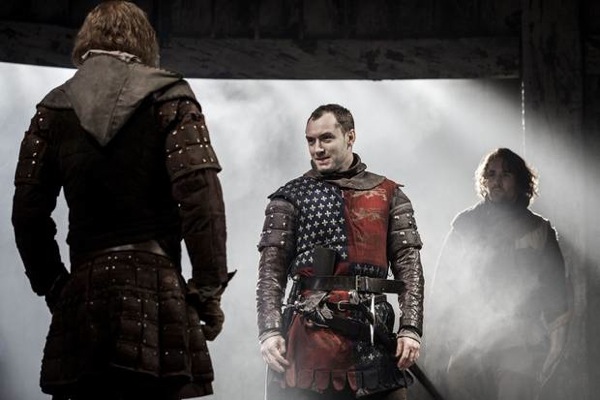 Jude Law takes Branagh’s Henry one step further into the realms of Machiavellian power-broking. Branagh’s King mused a bit, felt sad and slightly guilty amid the carnage. Jude Law’s king is a hyperactive psychotic yuppie who prances around the stage verbally and physically bullying friends and enemies alike into compliance. It’s a fantastic performance, restless impatience and brutal energy constantly jostling in his delivery. The physicality of Henry, constantly waving his hands around to emphasise points, plans, or jabbing them like weapons at the people he’s talking to, is wonderfully counterpointed by the largely static performances of the supporting cast. At times he reminded me of Begbie from Trainspotting – matey impatience waiting to snap into thuggery at the drop of a hat. He carried all of the big speeches, injecting them with enough energy to rescue them from over-familiarity, and his wooing of Katharine at the end of the play was, for me, the highlight of the evening – funny and creepy in equal measure. 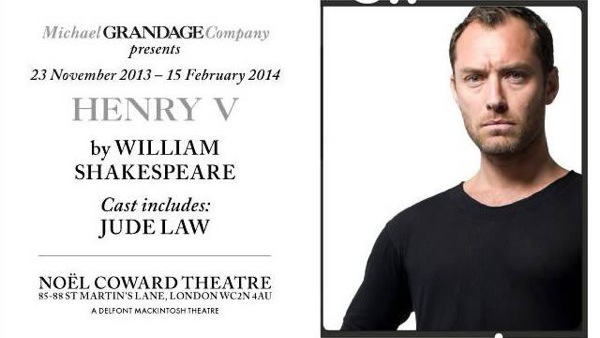 The production overall was tackled at high speed on a minimal stage – cramming the play into roughly three hours (in Shakespeare’s time this would also have been the case – it’s only from the Victorian era that pompous enunciation of every syllable slowed the plays down). Once in a while some of the performers sounded like they were gabbling, and briefly lost the meaning of the text, but on the whole delivery was clear. Ron Cook’s Pistol avoided the buffoonery many actors attempt when trying to render Elizabethan jokes funny for modern audiences, and instead managed to create a stripped-down version of Simon Beale’s magnificently tragic Falstaff in The Hollow Crown. Noma Dumezweni was equally impressive as both an understated and thoughtful Mistress Quickly and as Alice, the maid who attempts to teach Katherine some English. The only bum note to my mind was the Chorus. Although Ashley Zhangazha’s performance was top notch I question the decision to put him in jeans and a union jack t-shirt and cast him, as far as I could tell, as a fifth former studying the play for his GCSEs.

Henry V is a play that superficially offers limited scope for interpretation and can degenerate into uninspired battle heroics punctuated by bombastic speeches, as witnessed in the sadly disappointing version that ended The Hollow Crown. To give it a new and sinister twist that opens up the darker implications of the play is a real achievement, and Jude Law does a great job.

If you want to find out what really happened at Agincourt and how the over-lusty and arrogant French were trounced by the stout-hearted men of England, read Julie Barker’s brilliant account.