A belated Happy New Year to everyone. This post is a bit later than I anticipated because I’ve spent the weeks after Xmas finishing the second draft of Thumb. It’s now been put into a drawer for a month to ferment before I give it another going over and then send it to my editor. In the meantime I thought I’d kick off 2013 with a look at one of my favourite artists, John Martin (1789 – 1854). Martin was a hugely influential painter who specialised in spectacular renditions of cataclysmic biblical scenes. Here’s one of his most famous, The Great Day of His Wrath (1853) which shows the end of the world. 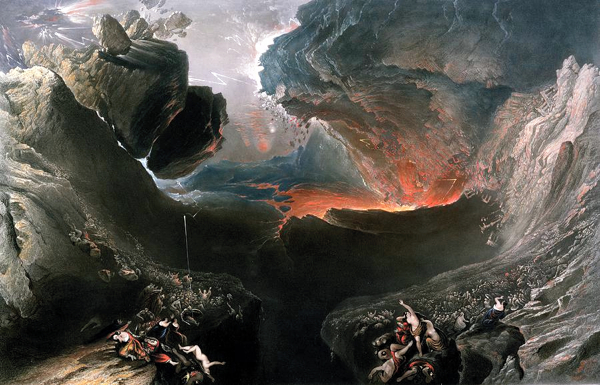 Martin’s religious works were revolutionary. Before him paintings from the Bible tended to be of people (i.e. Jesus, the Apostles, Abraham etc.) and covered a very specific range of limited subjects (The Annunciation, The Deposition, Doubting Thomas and so on). People in Martin’s paintings tend to be very small, down in a corner somewhere and usually falling into crevasses while the landscape is hurled about around them.  His work follows the Romantic creed of the Sublime, a vision of the natural world that is so vast and powerful that it humbles and awes those who look upon it. At the same time he was influenced by the early Geological schools of the Vulcanists and the Neptunists.

The Vulcanists and Neptunists, known collectively as ‘Catastrophic Geologists’ tried to explain how the surface of the Earth had reached its current form. Following the dictates of Platonism, which sees God’s creation as perfect, the world should be a uniform sphere. In reality it has random bits sticking out all over the place. The Vulcanists claimed that the surface of the Earth had been formed by sudden bursts of violent volcanic activity. The Neptunists stated that mighty floods had carved out the mountains and the valleys. The latter had scripture on their side, but in both cases these geologists were postulating a planet that was no more than 6000 years old. Rivalry between the two groups was intense. Neptunists used to waylay Vulcanists and beat them up, Vulcanists would mob Neptunist lectures and throw rotten fruit and horse manure.

Martin’s paintings belong to this vision of a world subject to massive violent turmoil, with mountains being hurled about and mighty waves thundering over the landscape while cities and people disappear into immense chasms. Interestingly, Immanuel Velikovsky‘s equally bonkers theories of the formation of the solar system (Worlds in Collision, 1950) belong to the same tradition.

The Vulcanists and Neptunists were superseded in the early 1830s by an altogether more sensible paradigm when Charles Lyell published Principles of Geology. This argued that the surface of the Earth had been created by forces still in existence, i.e. erosion. Though seemingly a bit prosaic compared to previous ideas, it was incredibly revolutionary, not least because its claims necessitated an Earth that was millions of years old, not thousands. Lyell, and the idea of ‘Deep Geological Time’, paved the way for Darwin, giving him a timescale in which his concept of evolution could properly operate.

None of this deterred Martin from his apocalyptic visions (or having a crack at some rather cuddly dinosaurs as in his frontispiece to Gideon Mantell‘s The Wonders of Geology (1838)). He carried on painting huge, dramatic canvases that have influenced artists and film makers ever since. My Great Uncle Archie used to come over all peculiar when standing in front of a painting by John Martin. I can see why, they are often so large that if you stand close enough they fill your field of vision, and you get the same feeling of slight dizziness you get with IMAX. 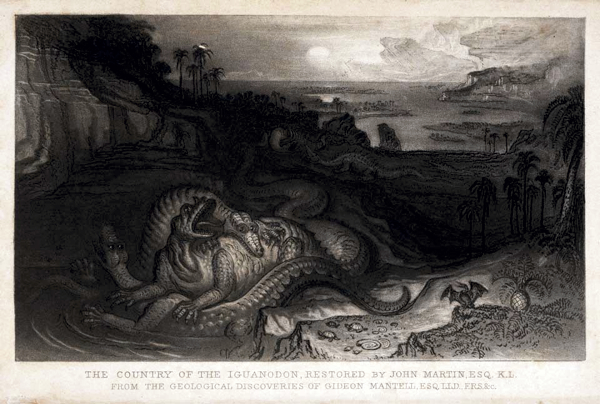 Finally – rumour used to abound that John Martin set fire to York Minster so he could have something spectacular to paint. In reality it was his elder brother, Jonathan Martin, who tried to burn the edifice down, and who ended up in a lunatic asylum.