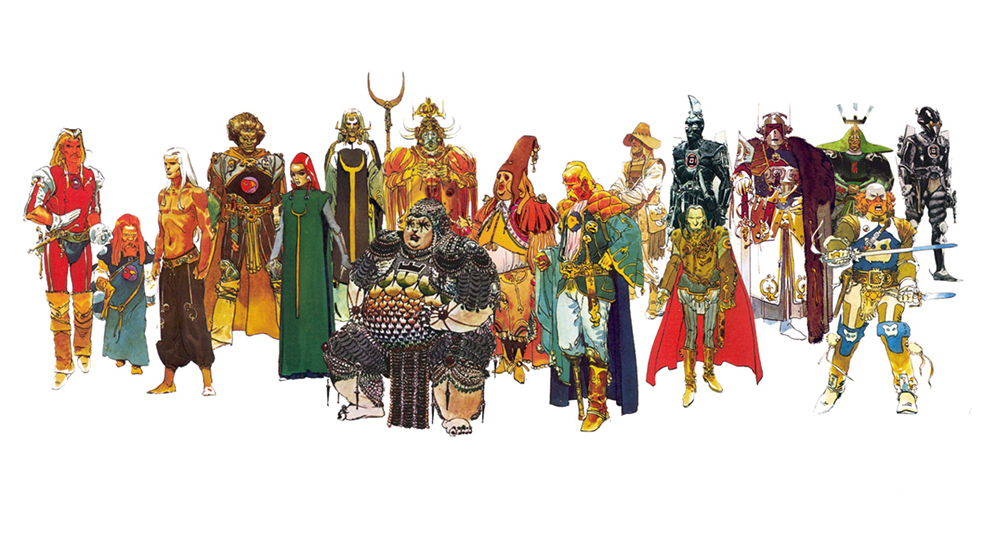 In 1977 the film-maker Alejandro Jodorowsky wrote an introduction to Dragon Dream’s monograph on the paintings of Chris Foss, 21st Century Foss (1977). The essay describes the artist as ‘a being who carried his drawings with the same ultra-maternal care as the Kaitanese Kangarooboos carry the children born of their self-insemination.’ Apparently Foss would ‘go for long walks in the small hours to a little plaza where lepidopterous creatures … would entwine their pink tongues with long, transparent hairs around his British member.’ The article tells you bugger all about Foss’s paintings, the rest of the book did that, but it speaks volumes about Jodorowsky’s own vision of the Dune that never happened, an insane psychedelic explosion that, if Nicolas Winding Refn’s comments in the documentary Jodorowsky’s Dune (2013) are to be taken seriously, may well have trumped Star Wars and redefined the concept of the SF blockbuster. To a 16 year old Yorkshire lad surrounded by Punk the introduction seemed hopelessly outdated, a throwback to the LSD-induced pseudo pomposity of prog rock and artistic self-aggrandisement. What I didn’t know was that Jodorowsky’s approach was grounded in Latin American surrealism and Magical Realism, and that behind the seeming absurdity was  a director who wasn’t just concocting outrageous fantasies, but who also managed to assemble a team that almost succeeded in making the film. 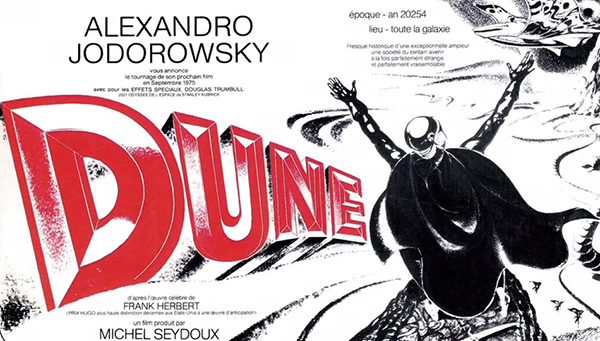 Frank Pavich’s documentary benefits hugely from the fact that Jodorowsky is not only still alive, but is a passionately intelligent artist who also seems to have a strong grasp on the practicalities of what he was trying to achieve. For that reason most of the movie consists of an extended interview with Jodorowsky himself, which in a lot of instances would be an indication of lazy film-making. In this particular case Jodorowsky’s narrative of the conception and planning for the film is fascinating enough to carry the piece along. Once you get past the charmingly innocent ‘60s vision of a film that would change the consciousness of young people throughout the globe, the overwhelming impression is ‘strewth, this guy could really have done it’. We could have seen Salvador Dali as Emperor Shaddam, Orson Welles as Baron Harokonnen and Mick Jagger as Feyd-Rautha. God only knows what the end result would have been like – Jagger was never the world’s greatest actor so whether he would have made a better job of the role than Sting is debatable, but Dali as the Emperor – complete with burning giraffe? The wilfully destructive Dali demanded $100,000 dollars an hour to take part. Jodorowsky offered him $100,000 a minute, on the principle he’d only appear for about five minutes maximum in the final cut.

Two things make it clear that we came very close – first is The Book. Jodorowsky, collaborating with the film producer Michel Seydoux and the artists Moebius, Giger and Chris Foss, designed all the costumes and sets and created a storyboard for the movie from start to end. The result is a breeze-block of a volume that the team then used to pitch to, among others, Warner Brothers and Disney. With only a few extant copies this is crying out for the Taschen treatment though the sheer physical size would probably make it absurdly expensive.

The second factor is the interviews with the team that Jodorowsky assembled around him. Sadly many of them are no longer with us. The cast list sounds like a recipe for disaster – cosmic egos like Dali and Welles just waiting to bounce off each other. The production team, on the other hand, seem a pretty sensible and straightforward bunch. Chris Foss’s training as an architect meant that he not only could design structures for the movie but work out how they’d be built. Giger, with his industrial design background, proved his ability to work on movies with Alien. After a dismissive meeting with a pompous and disinterested Douglas Trumbull, Jodorowsky saw Dark Star and contacted Dan O’Bannon who promptly sold everything to go and live in Paris so he could work on Dune.

It’s a testament to Jodorowsky that he could inspire such loyalty to his vision, and a clear indication that those around him clearly believed he had something – that it could have worked, not least because of the insane dedication he had to the story. His son, Brontis Jodorowsky, who’d already appeared in El Topo (1970), was to have played Paul Atreides. To prepare him, his father had him learn martial arts six hours a day for two years, and yet not only is he still talking to Alejandro but has a clear, if slightly bemused, affection for his barmy dad.

Unsurprisingly the major studios rejected the film as too expensive and too wacky. The film rights to the book lapsed and Dino de Laurentiis picked them up, eventually producing David Lynch’s version. Jodorowsky gives a delightful anecdote of going to see the movie feeling ‘like an ill person’, partly because of his own admiration for Lynch as perhaps the one man who could achieve the vision, and then ‘step by step, step by step, step by step I become happy because the picture is awful’ – mangled beyond recognition by the producers.

Pavich’s theory is that despite never being made Jodorowsky’s Dune, through The Book, had a huge influence on SF movies, not least through the subsequent work of Dan O’Bannon, Giger and Foss on Alien and Star Wars. It’s even clear that Laurentiis lifted visuals and images from Moebius’s designs for his own Flash Gordon (1980). Jodorowsky went on to collaborate with Moebius and others on Graphic Novels, the most famous being L’Incal, which had within it many of the ideas from Dune. At the end of the film Jodorowsky himself states the obvious – someone should take the storyboard and turn it into an animated film, now that we have the technical capability to realise the imagery. Sadly with Moebius, Dali, Welles, Giger, O’Bannon and others no longer around it’s unlikely it would ever come close to the vision. When they read a score expert musicians hear the music in their heads, often saying that no real orchestra can ever match the perfection of their imagination. I think it’s the same with Jodorowsky’s Dune, the film that exists in his mind, and our minds, when we see the designs and hear the ideas, will never be surpassed.

The documentary is currently available as a download from iTunes.